Pope Francis, how are his reforms proceeding? Paul VI and Romero, media and reality

Pope Francis, does the new CDF document signal a shift in the discussion? 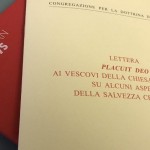 Waiting for the Pope’s document on spirituality in the modern world that should also address the issue of pelagianism, a document issued by the Congregation for the Doctrine of the Faith and addressed to bishops worldwide prepared for the discussion.

Published on March 1, the document is titled Placuit Deo (“It has pleased God”) and is intended – the first paragraph reads – to “in light of the greater tradition of the faith and with particular reference to the teachings of Pope Francis, to demonstrate certain aspects of Christian salvation that can be difficult to understand today because of recent cultural changes.”

In fact, the document also represents a sort of clarification of Pope Francis’ thought on neo-Gnosticism and neo-Palegianism trends – both of which Pope Francis has said many times he considers among the evils of our times.

These two topics are already addressed in Evangelii Gaudium, the Apostolic exhortation that contains the guidelines of Pope Francis’ pontificate: the exhortation is a landmark to understand Pope Francis’ modus operandi.

One way – the Pope wrote – is “the attraction of Gnosticism, a purely subjective faith whose only interest is a certain experience or a set of ideas and bits of information which are meant to console and enlighten, but which ultimately keep one imprisoned in his or her own thoughts and feelings.”

The other was is “the self-absorbed promethean neo-Pelagianism of those who ultimately trust only in their own powers and feel superior to others because they observe certain rules or remain intransigently faithful to a particular Catholic style from the past.”

The Pope then continued that neo-Pelagianism, supposedly a sound doctrine or discipline, “leads instead to a narcissistic and authoritarian elitism, whereby instead of evangelizing, one analyzes and classifies others, and instead of opening the door to grace, one exhausts his or her energies in inspecting and verifying. In neither case is one really concerned about Jesus Christ or others.”

These led some to believe that, while speaking about neo-Pelagianism, Pope Francis was referring to the traditionalist world and to a too-rigid defense of doctrine. Anytime Pope Francis has spoken of neo-Pelagianism – and he has done so many times in almost five years as a pontiff – the term has been used to label those who are on the other side of the agenda of mercy.

This created an artificial polarization, that in fact lose sight of the actual sense of Pope Francis’ first exhortation: the joy of announcing the Gospel. The allegation of neo-Pelagianism prevented broader discussions by portraying them exclusively in terms of pro or anti-Francis, also about important topics like the Eucharist for divorced and remarried. This happened because those who defended the doctrine of the Church were always labeled.

With the document Placuit Deo, this polarization is set aside, as the document clarifies Pope Francis’ thought.

The document reads that “a new form of Pelagianism is spreading in our days, one in which the individual, understood to be radically autonomous, presumes to save oneself, without recognizing that, at the deepest level of being, he or she derives from God and from others,” and in which “salvation depends on the strength of the individual or on purely human structures, which are incapable of welcoming the newness of the Spirit of God.”

While – the document continues – “a new form of Gnosticism puts forward a model of salvation that is merely interior, closed off in its own subjectivism.”

As can be noted, the document makes no reference to an alleged doctrinal rigidità. It rather emphasizes the emergence of a way of thinking that claims to save by itself, without recognizing the bond with God and that salvation lastly depends on God.

In addition, a shift on the discussion can be observed. Beyond the doctrinal issues, it is clear that the world that has been labeled as being traditional, and many times described as critical of the Pope, has rather grounded its criticism on the opposite basis. That is: that the discernment the Pope called for, and the need to be merciful in order to open always more hearts to the Word of God, could never be separated from the teaching of God and from the need to trust God in order to follow the Church’s teaching, although with some difficulties.

The document seemingly turns the world upside down. Those who mostly speak of personal conscience and discernment sometimes are detached from the idea of a needed confession and conversion, and aim at a self, man-made salvation. Perhaps, a neo-Pelagian trend can be more readily found in those who are considered the elastic promoters of mercy rather than in the rigid defenders of doctrine.

The document goes beyond. It underscores that “the comparison with the Pelagian and Gnostic heresies intends only to recall general common features, without entering into judgments on the exact nature of the ancient errors. There is a great difference between modern, secularized society and the social context of early Christianity, in which these two heresies were born.”

This way, the Pope’s words are clarified, as they are often read as direct allegations against some particular trend.

It is fair to say that the Pope has always in mind particular situations when speaking. But it is also fair to say that the Pope always speaks in general terms. The document shows the personality of a Pope that aims to go toward frontiers and peripheries, and wants to open up the world to the Gospel message. But this Pope is also profoundly grounded on tradition, and knows that outside of the Church there is no salvation.

This is the reason why Placuit Deo represents an invitation to broaden the discussion on the pontificate and faith. Rather than focusing on casuistry, it is important to look at the general picture of a de-Christianized world.

Pope Francis’ formula is that of the Jesuit apostolate: to go there where the discussion is difficult, rather than consolidating that which is generally accepted already. These are the lenses through which to read some aspects of the pontificate. For example, the Pope’s decision to go to Lund to commemorate the Reformation, with a schedule that initially did not foresee a meeting with the Catholic community. Or the June 21 meeting in Geneva with the World Council of Churches. Or the ecumenical commitment to tear down barriers beyond any theological issue.

All of this cannot be read in opposition to what was done in the past. Pope Francis simply has a different style. This is the reason why Placuit Deo can be considered in any case a milestone: it clarifies Pope Francis’ position and requires us to look beyond. Will it be enough to overcome the pro and anti Francis polarization?