Pope Francis, does the reform make Curia jobs like any other? 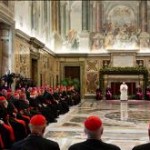 Among the novelties of the reform of the Curia already applied by Pope Francis on several occasions, there is a noteworthy one: priests and bishops cannot work in the Holy See more than two five-year terms – that is to say that no monsignor of the Curia will be able to serve for more than ten years in the Vatican, and then he will have to return to the diocese, be at the bishop’s disposal, or perhaps take other positions, perhaps in the nunciatures that are always seeking new diplomats or in missions where there is a shortage of priests.

As mentioned, Pope Francis has already applied this rule, although it has not yet been officially established, on several occasions. He also did it with his personal secretaries. The purpose of this norm is to curb ecclesiastical careerism and, at the same time, not to have points of reference in the Curia that could become too influential.

It is a norm that goes hand in hand with the decision to include a year in missionary territory in the curriculum studiorum of the future “ambassadors of the Pope.” It is a norm that also goes hand in hand with how Pope Francis chooses the new cardinals. With Pope Francis, there are no cardinalatial dioceses or positions. There are the people he trusts or the dioceses that he wants to highlight, at his discretion. It is impossible to anticipate the Pope’s criteria because the consistories have so far always been announced suddenly, surprising the new red caps.

Pope Francis, in short, wants to put into practice what he has always called a “conversion of mentality.” He does it brutally. Indeed, when he met the Vatican Dicastery for Communication some time ago, he admitted that the reforms had to be done in an ugly way. In the end, the Pope wants things done, and he wants them done his way. If this does not happen, he acts accordingly.

However, suppose the fight against careerism and the excessive protagonism of some clerics is part of an indeed commendable and necessary effort. In that case, the reform can have its downside, perhaps unwanted and yet devastating effects for the Church itself.

For clergy members, the Holy See is not a job. It is a service. They approach the Holy See with the same spirit with which they go to mission lands. In mission lands there is a need to evangelize, and in the Holy See the goal is to provide the tools for evangelization. It is not superficial work. And being a tough job, because – as the Gospel says – “the harvest is plentiful and the workers are few,” there is a real need for those who consider it a mission and work with passion and dedication, continuously.

It does not mean that, by doing this, the clergyman loses touch with reality. It is enough to look around the Vatican to realize how the ecclesiastics who work in the Holy See are active in celebrating masses, helping the parishes, and supporting the poor. It is humble and hidden work, but real and alive. And it would be enough to look at the nunciatures to realize the enormous pastoral work done by the apostolic nuncios, as the first to travel, accept invitations, help impart the sacrament of confirmation, and help when there is a shortage of priests, taking Christ to where the Church seems silent.

However, if for a clergy member the work in the Holy See becomes an interlude of ten years, then everything changes. It is no longer a service but a job. Worse still, it is a separation from his regular job, to carry out what can be considered a bureaucratic position and nothing more.

What can one ask of a clergyman who knows that his work in the Holy See is not a service, but a job that he must do because he cannot reject the call to do that? What are the long-term projects that he can develop?

The Holy See is a complex machine, not easy to understand. It takes years to get into the mechanisms, to understand the procedures. They are seen as cumbersome procedures, and perhaps they are. But they are not useless. They serve to protect the Church, giving guarantees to priests. Everything must be thought out to the smallest detail, from trials to social documents. Nothing can be superficial.

To avoid being superficial, however, one must just cling to the history of the Church, to the tradition that was born precisely to help the weakest. A Church that is not an anachronistic court but the evolution of a living organism, called to support priests and the faithful in the world and defend herself from the attacks of the world.

Ten years is hardly enough to learn all this. The officials of the Holy See were once imbued with tradition and history, and from them, they came up with innovations and ideas. The past was not denied. Rather, they built upon the past. And this was done because the Church felt founded on eternity, not on the here and now.

The principle of subsidiarity arose from this: the Holy See gave general guidelines. At the same time, the dioceses had to make these guidelines concrete, looking carefully at their theological meaning.

Today, the Holy See thinks more about concrete things than giving general guidelines from which everyone can draw, which can be seen from how recent interests have developed. So, people in charge of the pastoral issues wait for the Holy See to tell them how to organize pastoral care, help migrants, and talk about the poor. The bishops, generally, make their way, as pragmatic as the Pope’s one, and as separated as each of them deem proper.

However, this treats the Vatican as if it were like any other workplace. Beyond what I call “the hidden Vatican“, there is no longer the pride of serving the Holy See. There is the convenience of having an office job, a parenthesis in a life that will then be spent from parish to parish, from diocese to diocese.

Thus, the noble intention of the fight against careerism risks being counterproductive. Will lay officials also be limited to ten years of service in the Holy See? Presumably not, unless they are in top positions. If the limit does not apply, we will find laypeople without pastoral experience, sometimes without even theological competence (rightly not required of them) who, however, will be in the dicastery more than their leaders. To avoid clericalism, the opposite phenomenon occurs: laicization.

A laicization which, however, will consider the Holy See only as a job. At that point, everything will be left in the hands of a few heroes who will still understand the institution’s meaning. The Holy See risks being treated by its employees as an NGO. What Pope Francis himself has said that he never wants.

2 Responses to Pope Francis, does the reform make Curia jobs like any other?