Pope Francis and the Culture of the Encounter Homage to Benedict XVI, Misunderstood Prophet of Our Times

Pope Francis: Easter, Time to Give Definitive Shape to the New Dicasteries? 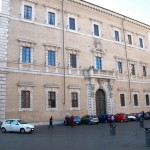 Last week opened with an international congress celebrating the 50th anniversary of Blessed Paul VI’s encyclical Populorum Progressio. The congress is not only noteworthy because of the quality of the interventions, which were characterized by an interdisciplinary approach. It is noteworthy also because the congress is the first one fully organized by the newly-born Dicastery for Service to Integral Human Development. Starting from Easter, the dicastery should take on a definitive shape.

Speaking in conditional terms is not an option. Formally at work since January 1, 2017, the dicastery still has not completed the “merger” and reorganization of the Pontifical Councils for Justice and Peace, Migrants, Cor Unum and Pastoral Healthcare Workers that will compose it. At the end of April, all of these offices will share the same headquarters, in Piazza San Callisto, a Vatican exclave in Rome where already many dicasteries as well as Caritas Internationalis are housed. By the way, Easter is the term limit for the “delegate secretaries” of each of the pontifical councils that compose the new dicastery. In the end, it is rather urgent to shape the new posts.

The name of the new Secretary of the Dicastery is still unknown, and should come right after Easter or so. He could be a layperson, but there are no rumors about possible names. Everyone says that the Pope alone knows, and that it could be an outsider. Some insiders mention Professor Vincenzo Buonomo, Counsellor of Vatican City State and a Holy See collaborator since Cardinal Casaroli’s time, but this seems to be unlikely: serving as an advisor of the Vatican City State, professor Buonomo is working on many important dossiers to update Vatican laws and also the Lateran University Statutes. His appointment marked the Pope Francis’ switch to the era of the consultants from within, after that of external consultants . Others mention Fr. Augusto Zampini, a priest of Argentinian origins who serves as spiritual assistant to the UK-based organization CAFOD, and who took part in some of the meetings. Everything is still in a perhaps phase.

In fact, appointing the new Secretary is just one – although important – knot to untie. All the officials of the various dicasteries were summoned on April 6 for a joint meeting to be updated on the state of curial reform. There have been no such meetings since last December. The meeting lasted about an hour and a half. No substantial news came out of it.

In the end, Cardinal Peter Turkson, already chosen as Prefect of the new dicastery, simply updated his officials. He met with the Pope on April 1 to explain developments in the new dicastery.

The dicastery will be made up of three sections: management, research and pastoral issues, and communication will be included in an area within the management section. The division is slightly different from what is indicated in the 2017 Vatican Year Book which stated that the dicastery included three commissions: for Ecology, for Charity and for Health Care Workers. Vatican officials do not have any assignment yet. Each section will be led by an undersecretary, and it is highly likely that the current secretaries and undersecretaries will be given these posts.

These three sections are in addition to the section for Migration that is directly under Pope Francis. The two undersecretaries of this section are Fr. Michael Czerny, a Jesuit, and Fr. Fabio Baggio, a Scalabrinian. This section has a staff, and is very active. Pope Francis often telephones or sends them notes – at least every 2 or 3 days – and the two undersecretaries often meet the Pope in private audience. They mostly work to create a link between the local churches and the Holy See, with a special bond with the Vatican Secretariat of State, as the diplomatic part is considered very important.

However, this section of the dicastery is substantially detached from the other sections that are under the Cardinal Prefect. It is yet to be determined how the work of the new dicastery will be organized.

Also on April 6, an “interdicasterial” (among dicasteries) meeting took place. The meeting discussed the theme of the next message for the World Day of Peace. This year’s message was formally chosen by the new dicastery, but de facto was completely outlined within the Pontifical Council for Justice and Peace. The upcoming one will be the first one drafted within the new dicastery. This point must not be underestimated.

Beyond this, there are still many things to do. The work of the new dicastery in fact mirrors the general situation of the Curia reform started by Pope Francis. The reform is being determined “in the walking”, as Bishop Marcello Semeraro, Secretary of the Council of Cardinals, admitted. In general it is known that the Pope wants to combine dicasteries, streamline the Curia and rename the Curia offices: the difference between Congregations and Pontifical Councils will disappear, while all of the new offices will be called “dicasteries”, a neutral name to indicate that the functions are of equal importance. It is yet to be clarified how the functions will be explained.

In the meantime, things go on confusingly. Scrolling through the 2017 Vatican Year Book, the new Dicastery for Integral Human Development includes the three commissions (although with no members), but does not mention Msgr. Pietro Dal Toso and Msgr. Segundo Tejado Munoz, respectively, Secretary and Undersecretary of the former Pontifical Council Cor Unum. Both of them have been confirmed in their posts until Easter, with the ranks of Secretary Delegate and Undersecretary Delegate.

Their absence can be explained if one recalls that their formal confirmation came after the Year Book was drafted and printed. So, at the moment of drafting, they were left without any post. These are the problems of a “walking” reform.

During the same week, the Dicastery for Laity, Family and Life – the other newly-born dicastery – co-organized with the General Secretariat of the Synod an event on the upcoming Synod for Young People and World Youth. In this case as well this is the first event organized by the new dicastery, although the new dicastery has not been defined yet.

The issue will be resolved internally, while the Council of Cardinals – whose next meeting is scheduled April 24-26, on the eve of the Pope’s trip to Egypt – will more likely discuss other aspects of the reform. Until now, the meetings of the Council were characterized by an ongoing discussion that resulted in their leaving some topics on the side to be discussed later after other meetings. This happened with the idea of a reform of the Secretariat of State: the discussion was quite lively at the beginning, then the reform was not discussed anymore, but now the idea has reappeared in one of the latest meetings.

The same happened when the names of new dicasteries were discussed. It also happened in the case of the so-called “diaconate of justice,” that is, the reform of Vatican tribunals.

In the meantime, the reform seems to be stalled. Only those reforms already underway are still going on, while Pope Francis keeps on meeting with the heads of dicasteries in order to be updated. However, in the light of the commentaries on the 4th anniversary of his pontificate, it can be inferred that he did not like the “functionalist turn” of the reforms. It is yet to be understood what direction his reform will ultimately take.

There is only one fact that can be taken for granted: Pope Francis considers working in the Curia as beneath that of pastoral work. Papal patronage will not occur in the Curia, as staying in the Curia means being marginalized, while administering a diocese is more important.

This is the reason why the rumor about Cardinal Pietro Parolin’s possible appointment as Archbishop of Milan must not be underestimated. As Secretary of State, Cardinal Parolin worked to strengthen the Vatican system, but this work can have provided him with many enemies. As Archbishop of Milan, he could gain greater importance, even in the Pope’s eyes.

It is just an example. Certainly, the old rationale that sending someone far from Rome means ending his career is, in fact, old. The opposite is true. It is, then, difficult to imagine that top officials apparently not on Pope Francis’s side will be sent away from the Curia, unless they ask to be reassigned. More likely they will not be given the opportunity to be appreciated in a different context.