Pope Francis: Ecumenism as a Response to Brexit? 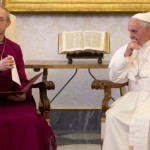 It is not official yet, but Pope Francis and the Primate of the Anglican Communion, Archbishop Justin Welby, will celebrate First Vespers on October 5 in Rome, in the Basilica of San Gregorio al Celio. The announcement was made by one of the Camaldolese monks of the monastery associated with the basilica during an event concerning Pope Francis’s Encyclical Laudato Si last May 19. Actually, the monk said that the meeting was to take place October 4, while the meeting will take place Oct. 5, according to insider sources. Details still had to be confirmed. And even now Archbishop Welby’s schedule in Rome is not yet complete. He will spend two intense days in Rome. The meeting, however, will take place, and it will also signal a message to Europe and Great Britain after the notorious Brexit.

The message to Europe will not be so much an outcome of the meeting itself – it is the celebration of the Vespers in the monastery from where Pope St. Gregory sent some 19 monks along with the Benedictine monk, Augustine [later St. Augustine of Canterbury] to evangelize the English people, thus linking forever that Basilica with Great Britain. The message to Europe will result from the common European sentiment that both the Catholic Church and the Anglican Communion feel. United by the notion of Christian roots and inspiration for a united Europe, the fact that these two Christian confessions show closeness might represent the first step toward building a common ground that goes beyond the European economic project, and at the same time one that returns to the notion of Europe as it was conceived by Catholics Alcide De Gasperi, Robert Schumann and Konrad Adenauer.

If this were to happen, the meeting would also constitute a qualitative leap in the ecumenical path between Catholics and Anglicans. The place would be the proper one: relationships between Anglicans and Catholics always progressed following meetings at San Gregorio al Celio.

The meeting between Pope Francis and Archbishop Welby will be the fourth between a Pope and an Anglican Primate in the framework of the Basilica. The first meeting took place on September 30, 1989, between St. John Paul II and Archbishop Robert Runcie. St. John Paul II welcomed at San Gregorio Archbishop John Carey on June 21, 2002. Finally, Pope Benedict XVI celebrated Vespers there with Archbishop Rowan Williams on March 10, 2012.

Pope Francis and Archbishop Welby will celebrate Vespers in San Gregorio al Celio on October 5, and the following day the Archbishop will have a private meeting with the Pope for a talk that could also issue in a new phase in ecumenical relations.

In September, the Council of the European Bishops Conferences will be called to choose a new president, as the current president’s term will expire. Cardinal Petr Erdo, Archbishop of Budapest-Estztergom, will leave office, while the frontrunner candidate to succeed him seems to be Cardinal Vincent Nichols, Archbishop of Westminster.

There are many clues that make Cardinal Nichols’s candidacy a solid one. Cardinal Nichols has been one of the main parties in the fight against human trafficking that is one of the biggest goals of Pope Francis’s diplomatic efforts – he is one of the initiators of the Santa Marta group dedicated to that purpose. Cardinal Nichols comes from Great Britain, and by electing him, European bishops would be thinking of preventing the island nation from becoming isolated, but instead to become a center for the recovery of a new European spirit. Besides, Cardinal Nichols is an effective man who trusts hierarchical and bureaucratic structure, a trait which would help him to connect with European institutions, a crucial issue today.

Cardinal Nichols is also called upon to carry forward the dialogue with the Anglican world that is seemingly one of the biggest ecumenical hopes. Archbishop Welby’s visit to Rome falls at the climax of a journey that – during these years – has witnessed the first Catholic celebration in 450 hundred years in the Royal Chapel of Hampton Court and the appointment of a Catholic bishop to lead one of the Ordinariates of former Anglican priests established with Pope Benedict XVI’s motu proprio Anglicanorum Coetibus.

It is not surprising that the first Catholic bishop to lead an Anglican Ordinariate is Steven Lopes, who, as an official of the Congregation of the Doctrine of the Faith, drafted the text and worked to put it into practice.

For the record, prior to issuing Anglicanorum Coetibus, Pope Benedict XVI consulted groups of Anglican priests who wanted to enter the Catholic Church. They were welcomed with significant exceptions for those priests or even bishops who were married and had children. The motu proprio was not a breach in the celibacy rule, but rather an opening for Anglicans who did not agree with the progressive stances of the Anglican Communion, in particular, with the ordination of women bishops.

Since Anglicanorum Coetibus was promulgated in November 2009, three Anglican Ordinariates have been established, comprising more than 3,000 former Anglicans in 90 communities in Great Britain, United States, Canada and Australia.

According to 2014 data, the British Ordinariate includes 40 communities, composed of 86 priests, 1500 lay people and two religious community; the North American Ordinariate counts 35 groups, 1600 layman and 40 priests; the Australian Ordinariate, the last one to be established, has 12 communities and 12 clerics, and plans to incorporate parishes in the Torres Strait.

True, Archbishop Welby was in favor of the ordination of women bishops. But since the beginning of his term, he has clarified that he was not going to back at all any form of same-sex marriage, and even announced the publication of an Anglican Communion Statement to reiterate that marriage was between a man and a woman only.

There are, in the end, issues in common that can bring about a European Christian Renaissance. Certainly, the Catholic world has more in common with the Anglican Communion than with Protestant confessions, to which Pope Francis will build a big bridge by going to commemorate the Reformation in Lund on October 31.

Nurtured on Protestant ethics, Germany is more inclined to the views of secularist European Union bureaucrats than to a European Union based on strong Christian roots, as the latter would have that strong link with Rome that the Protestant Reformation broke. In fact, the Protestant rationale – getting rid of the Roman center in favor of the peripheries – has taken hostages within the ranks of the Catholic Church, and this mentality is probably the Church’s real enemy nowadays.

The reason for this is that primacy of conscience, with its origins in Protestantism, is at the basis of the thinking that brought about the anti-Catholic Enlightenment, and from there onward to secularizing trends, to Kulturkampf in Germany, to the project of marginalization of the Church that lay behind the struggles to unify Italy, and also to the erosion of Catholic thought and tradition in Belgium and Spain, to name two examples.

This mentality caused the European Union to lose its Christian identity, since if conscience has primacy there are no common values. In the end, the European Union turned out to be a mere economic and political agreement among nations. European institutions are in fact a series of bodies and organizations that can pass any kind of resolution, even against the peoples’ will. For example, on the issue of family, many people in Europe rejected the legislation of their own countries that destroyed the notion of family – legislation often justified by lawmakers on the basis of a requirement to comply with European guidelines.

Is there a distinctly Catholic way of thinking in Europe? Yes, and it can be seen from the many manifestations and referenda that took place just in the last year: from the Manif pour Tous in France to Family Day in Italy, from the referenda in Slovenia and Slovakia to the huge collection of signatures in favor of the family in Romania (the result of a common effort with Orthodox Christians), and finally in the signatures collected in Poland against abortion.

It seems paradoxical that, while a certain theology develops in favor of the primacy of conscience, especially on family issues and everything related to it – as became evident during the two Synods of Bishops on the Family convoked by Pope Francis – there is a profoundly European spirit that relies upon Christian values and roots, and rejects the EU resolutions on gender equality, the right to abortion and euthanasia, and surrogate motherhood.

In fact, this group, relying on the Christian roots of Europe, is based on the original European values, found in typically Catholic notions: subsidiarity, integral human development, supranational democracy as the foundation of a new Christianity, the last of these as it was presented by Jacques Maritain (Blessed Paul VI’s philosopher), and finally Pope Leo XIII’s Neo-Thomist project, as it was presented in the encyclical Immortale Dei.

Beyond Brexit, there is a real European spirit that can be forged on ecumenism, starting from common Christian roots.

Despite this biased vision, Pope Francis praised the values of Europe. When he received the Charlemagne Prize, he launched his idea of a Europe made of bridges and not of walls, behind which one might glimpse a sort of European spirit. When he met the French Catholic-Socialist group “Poison Rose”, he said that Europe “is the only continent that can bring unity to the world” as it is the continent “with the vocation to the universal service”. When he filmed a video message for the meeting “Together for Europe” – a gathering of ecclesiastical movements and civil society that took place in Munich, Germany, July 1-3 – the Pope encouraged European movements, asked Europe to be a family of peoples and then insisted: “In an always less Euro-centric world, Europe is called to reflect and ask itself if its immense patrimony, pervaded by Christianity, belongs in a museum or is still able to inspire culture and donate its treasure to the whole of humanity”.

On these issues, there is certainly common ground with Archbishop Welby, who was once a manager in an oil company, and who was educated with the social teaching of the Catholic Church, as he himself once admitted.

This way, Anglicans and Catholics are now growing closer, treading a path that Pope Benedict XVI initiated. This path could be the stimulus to launch a new European spirit – a more Christian European spirit, even if carried on outside of European institutions, whose work the Catholic world can barely accept. It is now the time to shape European institutions, and “transubstantiate them”, according to the genial notion of “transubstantiation of the world” that Pope Emeritus Benedict XVI developed at the end of the celebrations for his 65th anniversary of priesthood.

Making Europe more united is the new ecumenical path. Pope Francis launched this path with the Orthodox world, too. He did it in his way, by visiting the island of Lebsos along with Bartholomew I, Ecumenical Patriarch of Constantinople, and Patriarch Hieronimos of Greece. The final goal is that of building a European spirit that breaths with two lungs, according to St. John Paul’s II dream. To achieve the goal, an ecumenism of culture and ideas will be needed, beyond the ecumenism of gestures, of blood and of the culture of the encounter.

4 Responses to Pope Francis: Ecumenism as a Response to Brexit?