To Go Where God Is Needed: Pope Francis’ Criterion for European Trips Pope Francis: the world behind ‘Laudato Si’

Pope Francis’ Encyclical on Ecology: What to Expect and What Not 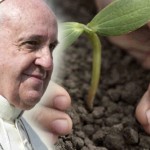 What if Pope Francis’ encyclical on ecology is in reality a text with a broader message, and ecology is just a papal pretext to ask the world’s rulers for further mutual collaboration and a greater commitment to peace, and to ask people of good will to adopt a more sober lifestyle? A few days before the release of the long-awaited encyclical, rumors are flying concerning what it will look like. What is of more interest, however, is whether the Pope’s overall methodology might be deduced from this second encyclical.

Despite the fact that everyone will be willing to claim the encyclical as backing for his personal views or policies – from the left to the right, from the Green Party to the Conservative Party, from the United Nations to the NGO’s – it will be difficult for the encyclical’s contents to surprise anyone.

Over the last two years, Pope Francis has assumed a line of reasoning: global warming cannot be denied. This reasoning was certified in an interreligious meeting on climate change issues held at the Pontifical Academy for Sciences last April 28. Not by chance the meeting’s conclusions were almost entirely restated by Archbishop Silvano Maria Tomasi, Holy See Permanent Observer to the UN office in Geneva, in a recent intervention he gave at a summit on climate change.

Obviously, taking this line means running some risks. International agencies under the United Nations’ umbrella are tackling the environmental issue by inserting the right to abortion within the sustainable developments goals, masking it with the terms “sexual and reproductive health.” The gender agenda has also gained even more traction within international agendas. Pope Francis is aware of this issue. He has attacked gender ideology and defended the natural family on more than one occasion. Recently, most of the speeches he has given to bishops during ad limina visits (the speeches to bishops from Puerto Rico and from Latvia and Estonia, for instance) tackle the issue. The same can be said of his weekly general audience addresses.

That the encyclical will likely adopt some of the sustainable development goals is the reason why it is also likely there will be many references to abortion. Pope Francis has often said he is surprised by the contradiction between those who defend the environment but do not defend human embryos. It is possible he will mention abortion in the encyclical? Will there only be some references, or will he will offer as well a well-grounded critique?

Among the Pope’s public stances, noteworthy is the speech he gave on June 11 to the UN Food and Agricultural Organization’s General Assembly. The speech may foreshadow the encyclical to come. Pope Francis stressed that access to food for all is “a right with no exclusions.”

The Pope said that “there will be some who will tackle the issue” of hunger, “perhaps a country, or an administration, or even that particular international organization,” but that there are no comprehensive and global responses. He insisted that despite the trend to leave difficult issues aside and despite a reduction in the number of “hungry people”, hunger must be vanquished, as the Rome Declaration on Nutrition states. The Pope also stressed the need for struggling against food wastage, the statistics for which “are worrying.”

When the Pope says that “someone will take care of it,” he is criticizing the policies of individual States, and asking the international community to take over the world’s major issues. Pope Francis has often spoken about a “culture of the encounter,” and this culture includes the notion of “ethical diplomacy,” that is, a diplomacy intended to achieve the common good.

The fight against waste – that is, “the throwaway culture” which the Pope always refers to – also deals with the sober and less worldly lifestyle the Pope is asking Catholics to adopt. This theme will certainly be included in the encyclical. For Pope Francis, being less worldly is an interior attitude that should be transformed into care for creation, while consumerism is a lifestyle that must be fought.

The encyclical should also include mention of Pope Francis’ concern about wars (he often speaks about a Third World War in parts) as well as the fact that natural disasters always strike the poorest more severely – the Pope’s attention to the world’s marginalized will emerge – and about other issues that the Holy See has tackled in studies, documents and addresses. Among these: the risks of “monocultivation,” GMO policies, land grabbing, the general distribution of goods with particular focus on water and the conflicts to control water resources, and on the distribution of food.

Scrolling through Holy See documents, all these points have already been raised. So the Pope is not likely to take stances that the Holy See has not already endorsed. Despite the fact that international agencies are all hoping for an explicit endorsement for their causes by the Pope – and be certain they will claim he has done so – in fact the starting point of the encyclical was the draft presented to the Pope in August 2014 by the Pontifical Council for Justice and Peace. The draft was a collection of studies and contributions that the Pope initially deemed “too long,” but that he probably later adopted almost in its entirety, combining it with his pastoral style.

Pope Francis’ modus operandi is premised on one basic principle made public in his pastoral exhortation, “Evangelii Gaudium”: reality is greater than ideas. His approach, then, is one based on real – or allegedly real – data, and from there he searches for a universal sense of things. His method is to move from a statement of reality to Biblical quotations and reflections, not from abstract principles to an interpretation of reality.

With this methodological assumption, it is foreseeable that the encyclical’s spiritual direction will not be found at the beginning of the document. In his first meeting with journalists, Pope Francis did not want to bless them so as not to displease those among them who were non-believers. This is the same principle he follows in this encyclical, and is the reason he may at times seem reticent in it to speak explicitly about the Catholic faith. He aims to speak about principles shared by every Christian confession, as well as by people of good will, with the hope that his cry of pain on behalf of a mother’s wounded heart admonishes everyone, and that, as a consequence, the upcoming December Paris Conference on Climate Change will lead to shared, good decisions.

Pope Francis’ and the Holy See’s concern over the upcoming Paris conference is heightened by the fact that the last documents produced by an international conference on climate change did not lead individual States to assume any real responsibility. The latest document from Lima (December 2014) – the Pope said he was “somewhat disappointed” about it during his flight back from the Philippines – was met with some criticism within the Vatican. A Holy See official explained that the document “does not state who controls what, and how this control is put into effect.”

The Lima discussions also dealt with “carbon credits” whereby the wealthier States, in order to maintain the level of greenhouse gas emissions they deem necessary for industrial production, are allowed to purchase or even take over the Certified Emissions Reductions credits of the poorer countries, those that produce less pollution because they are too poor to have an industrial system.

This is another topic of interest about which the Pope was briefed and that might feature in the encyclical. In the meantime, a diplomatic model has recently been launched: the Pan-Amazonian Inter-Ecclesial Network – REPAM – with the aim of gathering together representatives of the bishops’ conferences, experts and officials of the States in which Amazonian deforestation is taking place, together with representatives of the wealthiest States, who, instead of being asked simply for funding or economic sacrifices, are invited to take part in the discussions in an effort to find shared solutions.

Pope Francis may opt to follow this model, as it is in keeping with the way he interprets the “culture of the encounter.”

It is known that the Pope wanted to focus the encyclical on the key term “human ecology” –  a department on human ecology should be also included in the new super-dicastery for Charity, Justice and Peace –  and that the encyclical’s drafters have insisted that “human ecology” is the key concept to understanding it. However, there is another phrase the Pope reportedly likes a lot: “ecological conversion.”

But if the encyclical contains this phrase (and the concept implied with it), the Pope’s commitment in favor of the common good may be exchanged for a sort of New Age ecologism that displaces man from the center of creation and makes him a mere artefact of creation.

Pope Francis’ words on these issues hold a specific weight, and this is the reason that the encyclical on ecology is much anticipated. Before taking any position on it, before interpreting it, it will be important to read the final text and compare it with the Church’s Magisterium before Pope Francis. Moreover, the encyclical will be interpreted correctly only if read through the lens of a Pope whose modus operandi is that of collecting different points of view and then making final decisions instinctively on his own.

Pope Francis’ political instincts led him to understand that environmental matters are a hot topic and that ecology could be a starting point for a wider message, that is, a way to spread his vision of the social teaching of the Church. In the Pope’s view, social teaching is for the poor, and it is enriched by local bishops’ conference documents – the Pope has read many bishops’ conference documents on the environment.

In the end, Pope Francis wants to offer a summary of every point of view. This is the method that led to the drafting of “Evangelii Gaudium”. “Evangelii Gaudium” is a text wherein topics intersect and repeat each other, and everything appears as an ongoing dialogue without a precise structure. This informal way of drafting documents – he considers every document in pastoral terms – runs the risk that the text will not convey a defining vision, so that anyone can use and exploit it as he wills.

This informality of style is also an indication of method. Francis believes that avoiding misinterpretation of the encyclical is the responsibility of the whole People of God, including parish priests and bishops – the latter were briefed on the encyclical last week in order to facilitate its reception, and the recent meeting of the Council of Cardinals also dealt with it. However, the longer the encyclical – some rumors have it that the encyclical is longer than “Evangelii Gaudium”, an exhortation that already seemed to be very long – the greater the likelihood of increasing misleading interpretations.

Finally, what should we expect from the encyclical “Laudato sii”? A text that must be taken for what it is. That is, the Pope’s call to care for society and the environment according to the criteria of the common good.

4 Responses to Pope Francis’ Encyclical on Ecology: What to Expect and What Not