Pope Francis, his “shock and awe” strategy Synod of Bishops: from Montini’s dream to Francis’ nightmare 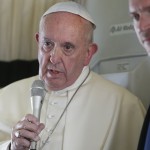 Pope Francis’ meeting with Cardinal Reinhard Marx last Sep. 19 will be a sort of watershed for the  Pontificate. There is no news about the meeting. The Pope and the Cardinal likely talked about the  upcoming Synod of the Church of Germany that is going to discuss the priestly celibacy, the Catholic  moral teaching on sexuality and clerical powers.

The Synod summoned by the Church of Germany would have a deliberative, binding power. However,  the Synod is not “ecclesiologically valid,” according to a letter from the Congregation for Bishops. The  Pontifical Council for Legislative Texts annexed to the letter a general juridical assessment. In the  evaluation, the Pontifical Council noted how the German Synod is going to face topics like “authority,  participation, and separation of powers, sexual morality, the priestly form of life, women in the  Church’s ministry and life.”

These topics, the assessment continued, are about “the universal Church and they cannot, with few  exceptions, be the object of deliberations or decisions from a particular Church without contravening what the Holy Father said in his letter.”

Pope Francis addressed a letter to the people of God in Germany on July 29. In the letter, Pope Francis  underscored that “any time an ecclesial community looked to overcome its problems alone, with its  forces, methods, and intelligence, the same community ended up with multiplying and feeding the evil that it wanted to overcome.”

Pope Francis’ words sounded like a clear admonishment, though framed in praise of the Synod’s path.  Pope Francis knows well that the Synod path cannot go beyond Rome’s authority. He knows it so well  that it never considered the Synod assemblies he summoned as deliberative (and he has already convoked  three synods, with an upcoming 4th, in six years of Pontificate). Pope Francis has always concluded the Synod path with a papal document, an apostolic exhortation. Evangelii Gaudium, the most crucial document of the Pontificate, is an apostolic exhortation. The  document also discussed the possibility to give more power to the local Bishops’ conferences.

Looking  at the ongoing discussion in Germany, it became clear that Pope Francis wants synodality and parresia  (frankness), though keeping the decisions in his hands. Pope Francis’ Church is a Church in a state of  permanent Synod with a single ruler, who makes decisions alone. There is Pope, and he acts as a  guarantor.

There has likely been a lot of bad faith in describing the Pope as attentive to the local Churches to  the point of devolving to them a total autonomy, even in doctrinal decisions. It has never been so. Pope  Francis’ election came along with the cheering of many “progressive” groups that rose after the Second  Vatican Council. These groups had political claims on their autonomy and saw a new resort for them in this Pontificate.

German theologians were very numerous among these groups. At the end of Benedict XVI’s  Pontificate, the “Parrish Priests initiative” (Pfarrer Initiativ) launched in Austria asked for the same  reforms the Church in Germany is discussing.

During his 2011 trip to Germany, Benedict XVI warned the Church of Germany not to be merely proud of her structure, but to return to God. In response, the German bishops took over a progressive  agenda. None of them shook the hand of the Pope at a meet and greet encounter with the then  German President Wulff.

Cardinal Marx’ decisions seem to be the final step. The Cardinal said that the Church of Germany  “does not follow the Canon Law Code,” and went on his way. He does not derive strength from Papal backing. He  is strong because the Church in Germany is wealthy.

Coming back from Africa, Pope Francis responded to a question on a possible schism within the  Catholic Church. And perhaps he was thinking more of the Church in Germany than of the US Church,  though he said that “it is an honor to be attacked by Americans.”

Pope Francis’ choices and words are not always appreciated in the US, where many criticize Him for his management, his views, and his economic doctrine. The Church in the United States is  however faithful to the institution, though in some cases it feels it has a moral obligation to attack instead of supporting the institution.

So, only the Church in Germany might operate a schism. The Church of Germany wants its autonomy  and the power to decide on its own, and always pushed for that. Last year, the German Bishops’  Conference opened to the possibility of inter-communion with Protestants. Some German bishops were concerned and wrote to Rome, and there was a meeting in the Congregation for the Doctrine of the  Faith that re-established priorities.

Now, the Church of Germany is attempting to make its own decisions again. Its choices are mostly political, with the purpose to overcome the crisis of the Church of Germany: there are always fewer people that  proclaim to be Catholic, and often they avoid doing so just in order not to pay the high Kirchensteuer (the Church  tax). Via this tax, the Church in Germany support many initiatives.

In the end, the Church in Germany is looking for measures to overcome the decline of her faithful and – as  a consequence – of money. These measures cannot solve the real issue: more than looking for  independence from Rome, the Church of Germany should worry about a sort of pragmatic schism among its  priests. According to recent reports, many German priests do not go to confession and do not  pray.

This is the reason why the meeting with Cardinal Marx is a watershed. Pope Francis, on his way back  from Africa, said he is not afraid of a schism, and by saying it so he challenged his opponents. This way, he hoped  they come out of publicly. The Pope puts the public opinion on notice, following  the Jesuit character: ready to fight, like St. Ignatius.

Pope Francis is different from his predecessors.  St.Paul VI stayed silent, and after Humanae Vitae he even stopped writing encyclicals, to avoid instrumentalizations. John Paul II responded with the strength of  the Catholic teaching, the renovation of the bishops and the theological help of a brilliant, faithful to  tradition German: Joseph Ratzinger. Benedict XVI focused on the big issue of truth, with the purpose  of revealing errors, and to show these errors to the Church of Germany.

Pope Francis instead launches the gauntlet. The gauntlet also reminds us that Pope Francis is a decision- maker. Synodality is a process; the final decision is his. When people understand this, the image of the Pontificate will change.