Curia, the time for reforms has (perhaps) come Pope Francis, beyond the paradigm of discontinuity

Pope Francis, for human rights and against the secularization of religions 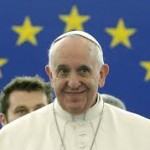 Pope Francis did not cross that much of a distance going from the European institutions to Turkey. The two Papal trips are linked in many ways, and not only because of some of the common themes they addressed. They are linked because of a central challenge: defending human nature. To face this challenge, ecumenical dialogue is crucial. Two are the main issues: the ecumenism of human rights, and the fight against the secularization and instrumentalization of religion.

In his speech to European institutions, Pope Francis spoke about poverty and immigration; he underscored the value of family; he condemned the opulence of the world and the culture of the throwaway; and shed light in social plagues like abortion. Two smarting speeches – to the European Parliament and to the Council of Europe – that criticized European institutions, underscoring theyneed to be more human. Above all, the speeches focused on human rights the way they had been originally conceived.

All of the things Pope Francis spoke about in his two speeches to European institutions may be understood as dealing with human rights. Human rights that are always more at risk, in the highly civilized Europe. A continent where new borns who survive failed late-abortion procedures are left to die, and with the European Court for Human Rights refusing to take a position about it; where religions are instrumentalized, and religious freedom must be reclaimed, since it seems that it is only individual freedom that is considered to be worth preserving; where religious communities are not – as it they should be – considered spaces of freedom, but misconstrued as places of coercion of personal freedom.

In these issues lie the connection between Pope Francis’ trips to Europe and Turkey. Turkey has experienced a strong secularization. But it is also a country where the majority of the population is Muslim. The confessional party has gained power, step by step. The country has in the meantime become more and more Islamic. After the exchange of citizens with Greece in 1923 – Greek Orthodox of Greek nationality went to Greece, while Turks in Greece returned to Turkey – the country has moved toward a progressive Islamization. The Ataturk secularizing revolution has been overturned in the course of the years, and the country has become more and more Islamic, to the point of bestowingpower on the ultra-religious leader Tayip Recep Erdogan for more than 12 years.

In the end, Erdogan is nothing more than the heir of that coalition between the Socialist Party and the confessional party that gained power in Turkey in 1974. A complex and difficult binomial, that between socialism and religion. South America has experiencedthis contradiction with Liberation Theology.  Turkey is experiencing its own version of this story.

It is true that religious feelings speak to large segments of the population. It is also true that religion is used as a political weapon, more than to illuminate the path of politicians. In the Turkey getting ready to receive the Pope, how religion is used as a means of power was noticeable. A use that even led to the Papal trip to the country being relegated to a secondary realm of attention.

After the meeting with the authorities in Ankara, the remaining of the Pope’s trip was considered a private visit. And a private visit does not enjoy widespread media coverage. A reductionist perspective with parallels in the situation of Christians in Turkey: they are not considered one of the religious minorities, they are simply conceived a foreign religion.

The Pope, thus, was treated just like any other Head of State. No large public gatherings in open spaces for people to meet him. The Christian community (which represents 0.2% of the Turkish population) is so resigned to this state of affairs that it did not even tried asking for permission to celebrate a Mass in a space that could hold at least 20 per cent of the faithful who wanted to see the Pope. For many Catholic Turkish, There was no chance to see the Pope.

And even fewer were able to attend the meeting between Pope Francis and Patriarch Bartholomew, an exemplary ecumenical meeting, during which the two have renewed once more their shared dream of unity among Christian confessions.

In fact, a political unity among European institutions would be needed first. “Ecumenismis not enough, Christian politicians should standbehind the same political flag, and work together for the sakeof the human being and defending natural law,” says GregorPuppinck, director of the European Center for Law and Justice of Strasbourg.

There are many complaints for violations of religious freedom, filed by many Christian confessions. This situation brings together Catholics, Orthodox, and Protestants. More than being a mere issue of dialogue among Christian confessions, ecumenism should become something concrete, a field to raiseissues on common grounds.

True, Pope Francis and Bartholomew hold each other in great esteem.They both approach issues in unconventional ways, and it is said that they will draft together common texts – first, one on ecology, a sort of encyclical that may become the first of its kind, with the twofold signature of the Pope and the Patriarch. Obviously, they also have a common commitment against religious persecution, especially the persecution ofChristiansin Middle East.

But the common ground of human rights is something to be further developed. While Christians are persecuted, in the heart of Europe the issue of the human being has become always more and more important. Pope Francis entrusted the Council of the European Conferences of Bishops (Consilium Conferentiarum Episcoporum Europae, CCEE) the task of fostering a dialogue with the Council of Europe, especially on human rights. And Cardinal Petr Erdo, Archbishop of Budapest and president of the CCEE, has underscored that “there is a need to clarify the basis of human rights, in the face ofthe so-called third and fourth generation rights that are not shared by everybody.”

The third and fourth generation rights are the environmental and self-determination rights, and in these latter lie many of the attempts of the gender ideology to run counter to human nature. Not by chance, “Humanum” was the title of the wonderful conference on the complementarity between man and woman held at the Vatican the day before the Papal trip to Strasbourg.

This ecumenism of human rights is perhaps the real common challenge for every Christian confession, a challenge that includes all the other challenges. The other task is to prevent religion from becoming a political instrument.

As the Pope in Turkey had been treated by Turkish authorities just like any other head of state, so it was the case for his visit to European Institutions, where he delivered two speeches and abstained from holding any pastoral event. His visit had been instrumentalized by socialists, who highlighted the part of the Papal speech focusing on immigration and poverty, and completely ignored the passages on human rights and family. It is revealing that in the EU official press release, there is no mention of God, the Social Teaching of the Church, or any of the criticism the Pope levied against the European institutions.

All of this to the convenience of Martin Schulz, a socialist and current president of the European Parliament, who had welcomed for the occasion of the Papal visit the socialist French leader Segolene Royale, who will, it seems, once again be a candidateinthe Presidential elections in France.

There is, in the end, the struggle of the socialist world, generally atheistic, to pull Pope Francis under their position. Something similar – but from a reverse point of view – is happening in Turkey, where religion has become a political instrument that has permitted Erdogan’s party to gain and consolidate power. In the end, there is nothing more secular in a party than to use religion as a political tool. And nothing more materialistic and socialist than the idea that religion is a tool through which to guide the masses.

One Response to Pope Francis, for human rights and against the secularization of religions