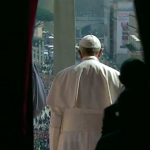 Churches in Brussels lean out toward the sky, as if they want to fill up the distance between God and man. This distance has been deepened during these last years, as secularization has seized Belgian society. After March 22, Pope Francis twice stigmatized the “blind violence” of Islamic fundamentalists, and during the Holy Tuesday Mass he hurled an anathema against the arms traders that disseminate death and terror. Perhaps, the analysis should also be more in depth. It deals with the need to keep our gaze set on heaven more than on earth. Therein lies the Church’s challenge and needed commitment to the modern world.

It is then worthwhile to widen our gaze. Lately, the discussion in the Catholic Church has focused on the topics that will be part of Pope Francis’ post-synodal apostolic exhortation. These topics mostly deal with a casuistry (which the Pope always says he wants to avoid), the most common example of which is that of divorced and remarried Catholics and of the possibility for them to receive sacramental Communion. Alberto Melloni, a Church historian and main exponent of the Bologna school that interprets the Second Vatican Council as a break with the Church’s tradition, even compared a possible reform concerning access to sacraments for divorced and civilly remarried Catholic with the reform of the Roman Curia: with regard to the first, the Pope might accept a compromise; with regard to the second, no one will stop the Pope, according to Melloni.

But this discussion reflects a Church closed inward upon itself, a Church not completely aware of its mission. Instead the Church needs to look at the world with new eyes.

Olivier Roy, a Frenchman and an Islamic expert who teaches at the EUI has just concluded the final report of his project “ReligioWest,” entitled: “Rethinking the place of Religion in European Secularized Societies: The Need for More Open Societies.” Following the Paris attacks in November, he wrote an op-ed for Le Monde, which simultaneously demands discussion and reflection.

Turning the usual perspective on its head, Roy states: “we are not facing an Islamic radicalization, but we are facing an Islamization of a social radicalization.” He underscores that there is a “generation nihilism” within a “youth fascinated with the idea of death” that is a wonderful catchment area for the self-proclaimed Islamic State. In fact, these young people do not go to mosques, they know not much or even nothing of the Quran and of Islamic society. But they dissent with the society they live in, and they look for any cause, at least a label, to sign with blood their “personal revenge.”

This is well explained in the Roy’s ReligioWest project. Roy analyzes today’s tensions, and describes those tensions as the consequence of “a growing secularization of culture that goes beyond the political conflicts between Church and State”. These conflicts – Roy states – “were not about faith, values or even culture, they were about power, and more precisely the political power of the Catholic Church.”

“All of these conflicts ended with some sort of a national pact, which varied in nature from one European country to another: separation (France, 1905 law, only accepted by the Catholic Church in 1924), a national Church (Greece, England, the Scandinavian countries), concordat (Italy with the Lateran agreements of 1929, Spain) or pillarization (recognition of specific faith communities by the State: Netherlands, Belgium, Germany).”

But – Roy adds – “these compromises” cannot hold anymore, because “tensions today are not about the political role of religions and churches (who have accepted separation from the State), but about the sharing of a common set of values and norms.” In the end – he stresses – “it is a cultural gap, not a political one.”

In the end, the bitter conclusion is that secularization has won. It won at the moment when many have noted the return of religion in society. But – Roy underscores – this return does not represent a real return to the public arena, but rather the greater visibility of religions.

Roy’s reflection also gets into the dialogue between religions and modernity, but discussing his paper in depth would take too long here. However, it is worth understanding what he believes the Church can do today, living in highly secularized societies.

After the Brussels attacks – as has often happened recently after these kind of attacks – many have returned to Pope Benedict XVI’s September 2006 Regensburg Lecture. The Lecture was defined as a sort of slap in the face of Islam, but this interpretation was the fruit of an ugly media campaign that hid the core of the problem.

In fact, Pope Benedict had noted that all religions can become violent, if they are not based on reason. Before writing the speech, the Pope meditated on the disputed passage of Manuel II Paleologus for days; he kept the book on his desk for a week. It was not a quote by chance, and it was not a naive error of the professor that by chance had become Pope. It was a needed slap in the face to the Western world.

To Pope Benedict, faith did not need to reconcile with modernity, but with reason. This change of perspective was not fully understood, though it bore fruit (see the Islamic-Christian table talk, “A Common Word”). The notion behind Pope Benedict’s reasoning was not that of a more human Church, but of a more divine Church.

Francis builds bridges of dialogue. He has always spoken of a “culture of the encounter,” and his criterion of an “outward bound” Church is that of a Church that goes toward those who are not Christian, thus creating new spaces for the Faith. Soon, he will visit the Rome Mosque, the first Pope to do that. In the meantime, he tried to achieve new relations with Sunni Muslims, and a delegation of the Pontifical Council for Interreligious Dialogue went to Egypt for meetings at the prestigious al Azhar University, whose imam was invited to visit the Pope in the Vatican.

The Pope also wanted to strengthen relations with the Protestant world (hence, the trip to Sweden, scheduled October 31). The dialogue with the Orthodox world brought about the first meeting between a Pope and the Patriarch of Moscow on February 12. It was not an ecumenical meeting, and the joint declaration that came out of it had rough edges in its words on the Ukrainian situation, which Pope Francis later tried to fix. However, that declaration is a religious response to the issues of modernity.

Finally, the two-year long synod discussions on the family. The Synod might have been a wonderful occasion to put the family, and in one word the human being, at the center of the discussion, with the aim of recreating that social texture that made of the Catholic Church the only institution able to go beyond borders and communities.

Perhaps the way the media reported the Synod’s discussion on the family is the way the secular world wages war today against the Church. It is a new way to try to destroy the Church from its foundation, and undermine its authority. Not by chance, media campaigns covering the responsibility of bishops for managing clergy sex abuse scandals have started up again (witness the case of Cardinal Philippe Barbarin in France).

How can these pressures on the Church’s doctrine on the family be interpreted as an attack on the Church’s moral authority? Because when all nation-states were established, when a small kingdom or a small power wanted to enlarge its borders, thus artificially creating national identities that overran local identities, the Catholic Church always privileged the role of communities, and in particular the role of families. For the sake of human beings, the Catholic Church has built a network based on the same faith and liturgy everywhere, with norms – Canon Law – which are always the same everywhere, with no exceptions.

Pope Francis must strongly take this topic into consideration after the Brussels attacks. In fact, Catholicism is not in conflict with other religions which present some fundamentalist characteristics to be purified. Catholicism, rather, is in conflict with a secularization that has poisoned religions.

Is interreligious dialogue enough, then? Certainly not. Work inside of institutions is needed. The Holy See has developed a diplomatic network that serves the Church’s mission, because it is intended to protect and defend the common good in international organizations, rooted in integral human development. In particular, the Holy See defends the first of every right, and from which every right is born: the right to religious freedom, often overshadowed in Western societies.

It is overshadowed because secularization is winning. In Canada the latest fruit of the revolution tranquille was the cancellation of the office of the ambassador-at-large for religious freedom: Canadian Bishops strongly criticized this choice. The US administration also established a special envoy for LGBT rights.

As terrorist labels provide young people with an identity, secularization destroys piece by piece the meaning of the human being. As once explained by Msgr. Livio Melina, President of the John Paul II Pontifical Institute for Studies on Marriage and Family, the goal of secularism is to build “a society that concedes the hedonistic pleasure of sex, but takes the man out the joy of procreation, that is of the participation in the process of creation by generating children.”

The Church’s battle is then fought in the need to educate human beings about their selfishness, in order to recreate a new society. It is fought, to sum it up, in order to make the Church more divine.

André Joseph Leonard, Archbishop Emeritus of Brussels, knows it very well: he made the increase of vocations to the priesthood and of pastoral visits to parishes the heart of his work in the Malines-Brussels Archdiocese, conscious as he is that society must be rebuilt from the roots. Cardinal Wilhelm Eijk, Archbishop of Utrecht, knows it too. In a recent interview with ACI Stampa, he underscored that secularization started spreading during the 40s, when “many Catholics could no longer see a link between their faith and their daily life. They did not reject the faith, they accepted the doctrine of the Church, but they no longer saw a link between doctrine and their daily life. This is where secularization is born, since an individual who does not see a relation between the faith and his own life can easily lose the faith.”

Condemnation of arms traders is necessary, but not sufficient. The big issues behind secularization that led to the current situation lie in that colonization of the human being which ruled Pope Francis’ Argentina, too. When the Pope was elected, the Van Thuan Observatory Report on the Social Teaching of the Church in the World had just come out. The report was about the “colonization of the human being” and also included a case history about Argentina. In other words, the Pope experienced these problems, and knows very well which issues are at stake.

Pope Francis developed the issue of the protection of the human being when he spoke November 25, 2014 at the EU Parliament and at the Council of Europe, and when he delivered speeches at the UN in New York and Nairobi. But these issues are barely present in his homilies, catechesis and Angelus’ comments, and they seem to disappear when events like the Brussels or Paris attacks take place.

These issues are in the end the core of the new evangelization. Religion is not the problem, but rather the solution of the problem. Like Belgian cathedrals, the Church must set it gaze on heaven, and propose once again that Christian model of society that shaped Western civilization. That model is still current and alive, despite what it is commonly said. When the Church makes the secular discussion its own, it is 200 years out of date. But, when it sets its gaze on Heaven, its feet are well grounded in the future.