Pope Francis: Has the Time of the Cross Come? 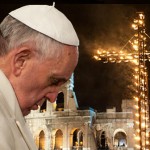 Pope Francis’ pontificate in a nutshell can be found in a 2013 letter of the Franciscan Friar, Berislao Ostojic, who until 2013 was Cardinal Jorge Mario Bergoglio’s confessor. The letter was sent to the Franciscan brother, Mario Marcos, sometime after Pope Francis’ election, and came to light again – thanks to the website ilsismografo, and then a commentary by ACI Stampa – when the news broke that the Pope’s former confessor died at the age of 68.

The letter is dated April 25, 2013. It is drafted by a person who knew Pope Francis in depth, knew his aspirations, and was comfortable with his way of doing things. Fr. Ostojic was Croatian, born in Austria, and ordained a priest in Italy. He was aware of the main problems of the Old World, the progressive secularization the Church was going to face. He taught Pope Francis about the dramatic situation in the Balkans, and perhaps some of his words lay beneath Pope Francis’ choice to go to Sarajevo last June for his second trip within Europe. At the same time, Fr. Ostojic knew well the South American reality and Pope Francis’ “modus operandi.”

At the beginning of the letter, Fr. Ostojic describes Pope Francis as a person “able to open hearts, build bridges and extend his hands but without compromising doctrine.” The Franciscan priest immediately states that Pope Francis will not give up doctrine, will not retreat from dogmas of the faith.

Fr. Ostojic drafted this letter just after the first month of Francis’ pontificate. At the time an incredible enthusiasm was aroused following the Pope’s first gestures. The ostentation of the choice of poverty and the Pope’s different approach awakened those who had revolutionary dreams for the Church. Especially the secular media.

It was normal that some members of religious orders were somewhat worried. The concern mostly affected the missionary religious orders. They are experiencing a profound crisis, as evidenced by the shutting down of the Italian edition of the magazine “Ad Gentes”, dedicated to mission. This crisis derives from the fact that Catholic missions have focused more on social issues and less on the announcement of the Word of God, as noted by the long-term missionary, Fr. Pietro Gheddo.

Fr. Ostojic probably perceived this crisis, and wanted to reassure his interlocutor.

“I believe,” he writes, “that the way Pope Francis appears demonstrates that he lives profoundly rooted in this Jesus that whispered to him – as He did with Peter – that question, ‘Do you love me?’ We could not wait for the answer, we were all able to perceive it.”

Fr. Ostojic based everything on the introduction to the Acts of the Apostles, which underscores that the book intends to recount what Jesus has “done and taught.” The Franciscan commented that “the order of verbs, to do and to teach, is not by chance, it is rather very profoundly meaningful.”

Fr. Ostojic emphasized that “Pope Francis’ gestures have their importance, and with the gestures the Pope seals the evangelical rationale of his words. These words do not surprise those who have been close to the Pope, since they have heard and seen them.”

Fr. Ostojic conceded, “It is natural that many ask themselves the inner reason and the basis of this style” that the world is so struck by. But he added, “There will be many opinions. The media, whether magazines and tabloids, or even more sophisticated ones, praise the new Pope and report so many interesting things.”

Fr. Ostojic words were prophetic, as Pope Francis’ pontificate has been until now more a media papacy than a real one, a papacy full of difficulties, and even of contradictions, but certainly in many cases over-interpreted. In the end the media have been anxious from the beginning to credit Francis for revolutions that never took place or for changes that came to be during his pontificate only thanks to the huge amount of work carried out during the previous pontificates.

For this latter reason, it is not by chance that the Pontifical Council for Migrants announced the theme for the next year’s World Day of Migrants with a press release in which it was emphasized that the World Day of Migrants was initiated in 1915. This fact shows that the Church has been committed to migrants for a very long time. Perhaps it is also not by chance that “L’Osservatore Romano,” the Pope’s newspaper, publishes more and more articles that show a continuity of topics between Pope Francis’ pontificate and the previous one.

In the end, Vatican media are always more inclined to offer a framework for and to show continuity in Pope Francis’ pontificate. Odds are that the recently established Secretariat for Communications will deal with this issue when it begins overseeing the contents of all the Vatican media.

Back to the letter. Fr. Ostojic underscored that “without any doubt, even when one appreciates the media’s mission, one has to avoid the trap of naive enthusiasm, because,” he added, “experience teaches us that frequently those who today praise you, tomorrow, for ideological reasons, will be on the other side.”

“For example, what will happen when the Holy Father reaffirms the value of all human life and states a clear ‘no’ to abortion? What will be said when the Pope supports marriage only between a man and a woman? And there are many other sensitive issues… In that moment, many whose praise for the Pope is superficial will change sides, and he will feel the weight of the cross, which cannot be negotiated at the expense of the truth of the Gospel.”

In this case Fr. Ostojic was revealed to be a prophet. Pope Francis actually said no clearly to abortion – and the ‘no’ to abortion was quite strong in the encyclical “Laudato Si” – and he stressed over and over again that “gender ideology is crazy” and that marriage is always between a man and a woman. Sometimes, his words were just downplayed. Other times, his words were completely ignored.

The debate for the upcoming Synod is now in the offing. The discussion seems to take place more in the media that among bishops. The media have recreated the dialectic between “conservatives” and “progressives” that worked well during the years of the Second Vatican Council and the years that followed. But this dialectic does not provide a nuanced view of reality, and it would be better to replace the terms “progressive” and “conservatives” with “adapters” and “followers.”

Nevertheless, those who want to adapt the doctrine to fit reality simply do not discuss their ideas. They try instead to influence public opinion, by adroitly exploiting the secular media. At the same time they work strongly as a lobby. Last week, Catholic News Agency revealed the news that a Swiss Catholic Foundation funded a LGBT lobby group for a campaign that put pressure on African bishops who are the most ferocious in defending the Church’s doctrine on family and marriage.

A book with contributions from 10 African bishops will show where the African bishops stand just before the upcoming Synod. At the same time 11 cardinals (coming from Europe, South America, and even India) will speak out in another book edited by the world-renowned German canon law expert, Winfried Aymans. The book, published in English by Ignatius Press, aims to put forward pastoral initiatives that can be implemented without adapting doctrine so that it squares with existing reality, but instead proceeding with hope and strength while remaining faithful to the ideal of the Gospel.

Which position the Pope will take in the discussion? Fr. Ostojic gives his response in the letter. He wrote, “I am profoundly convinced that Pope Francis lives with serenity, and that he will be able to bear the cross, and from the cross invite the Church to the hope that does not betray.”

Fr. Ostojic added that “those who speak with him for any reason will hear from his lips this request, ‘Pray for me.’” This means that the Pope “considers power as a service.”

Where do the Pope’s gestures come from? Fr. Ostojic said that his gestures came from the intimate prayer with Christ, in front of the Eucharist. Fr. Ostojic already knew what the Pope was going to say. He predicted that the Pope was going to say more and more that “God is never tired of forgiving, but we sometimes are tired of asking for forgiveness.” And he added, “We must pray for him, be faithful to his Magisterium and, according to our possibilities, collaborate to bring the seeds of the Gospel to today’s world.”

These words also explain well the reason why speaking about the Gospel is still a must, today as ever, despite the fact that Pope Francis has given his pontificate a missionary emphasis. And the Ratzinger Schuelerkreis – the circle of Benedict XVI’s former students – will talk about this in its annual gathering at Castel Gandolfo next week.