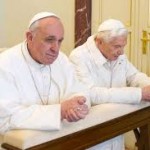 Pope Francis established a group of Eight Cardinals to advise him about a reform of the Curia and the government of the universal Church. He has several people he trusts working with him, like Cardinal Agostino Vallini, the Pope’s vicar for the diocese of Rome. But the most influential adviser is in fact Pope Francis’ predecessor, Benedict XVI. Pope Francis holds Pope Benedict in such a high regard that he sent to him the first copy of the interview he granted to the Jesuit-run magazine “La Civiltà Cattolica”. And Benedict XVI, obedient and at the same time precise, responded with four pages of comments.

This anecdote has been revealed by Archbishop Georg Gaenswein in a interview granted to the German television network Zdf (and posted in the religious information portal korazym.org). Monsignor Gaenswein is Benedict XVI’s private secretary and the Prefect of the Pontifical Household under Pope Francis, thus playing the role of sort of a «bridge between two Popes.»

In this capacity, Monsignor Ganswein also transmitted the messages (always more frequent) and invitations Pope Francis sends to Pope Benedict.  In July 2013, Benedict XVI was invited to take part of the unveiling of the statue of Saint Michael the Archangel in the Vatican gardens. Following that, Pope Francis visited the monastery Mater Ecclesiae in Vatican City State, where the Pope emeritus is now living. The visit Pope Francis paid Benedict to wish him a merry Christmas was then followed, shortly after Christmas, by a lunch together at the Domus Sanctae Marthae, where Pope Francis is living. And finally, Pope Francis invited Benedict XVI to take part in the Consistory of February 22, when the Pope emeritus sat among the cardinals, as first in dignity but at the same time “primus inter pares.”

«The Pope emeritus is an institution,» Pope Francis said in a recent interview. That Pope Francis gives particular consideration to the recommendations and the presence of this institution is proved by the fact the he sent Benedict XVI the first printed copy of the interview he granted to the editor of “Civiltà Cattolica”, Father Antonio Spadaro. They were not mere notes. Pope Francis asked Benedict XVI for comments. And Benedict XVI – in Monsignor Gaenswein’s words – made his homework and sent Pope Francis a series of remarks, in four pages.

What the remarks were about is a mystery that Monsignor Gaenswein does not want to unveil. In any case, Father Spadaro recently published a book which included the interview, and explained in that there had been some touch-ups, with unedited part of the interviews and some slight modifications. «It is a sort of definitive version,» fr. Antonio Spadaro maintained. This is significant.

In fact, the counsel of Benedict XVI can be seen behind some of Pope Francis’ recent decisions. Step by step, one piece after another of advice, Pope Francis reshaped his revolution. He institutionalized the group of Eight Cardinals (which he first thought should be only informal). He has limited his vague statements, which are now more focused on the gospel and are less off-the-cuff comments.  He has started to trust and value advisers from within the Church, after a season in which the (really expensive) hiring of external consultants had become, it seems, the rule.

Certainly, there is also some of Benedict XVI’s influence in the trust that the incumbent Pope is  increasingly placing on Monsignor Alfred Xuereb, formerly the Pope emeritus second secretary and now the first secretary of Pope Francis, thanks to a recommendation letter Benedict XVI wrote for him.

Xuereb, a Maltese, has a diplomatic background few seem to know much about, and great tact addressing issues.  He was first appointed Pope Francis’ delegate in the pontifical commissions dealing with the Institute for Religious (a.k.a. IOR) and with the economic structure of the Holy See, and then prelate general secretary of the newly established Secretariat for the Economy.

In the end, both of Benedict XVI’s secretaries are playing key roles in this pontificate. This certainly bothers those who have supported the narrative that there was a need, after Benedict XVI’s pontificate, for a change in course. Maybe we should read under this light the most recent attacks against Georg Gaenswein, the first to be under attack in the Vatileaks scandal and yet working side by side to both Popes. A media outlet has called for Gaenswein to resign from his position of confidence to the Pope, because of some statements made in an interview to a German media which have been taken out of proportion.

Monsignor Gaenswein and Monsignor Xuereb are very valuable to a Pope that, as has been noted, engages reforms in rushes of impetus, and without having a general project (as he admitted in his most recent interview).

Pope Francis nevertheless wants to walk on and continue the path traced by Benedict XVI, who made of the joy of the faith the main focus of his pontificate.  A joy he linked to the reasonableness of faith. Benedict strongly spoke against the Church becoming entrenched behind a fortress of moralisms, but rather always restated the truth of the faith. He asked for a demundanization of the Catholic Church, and at the same time underscored that the Curia and the ecclesiastical institution are part of the body of Christ, i.e. the Church.

Every assertion by Benedict XVI was balanced by a further explanation. This is something that appears to be missing in Pope Francis’ dialectic. Beyond the broad discussion about Pope Francis’ discussion on negotiable and non-negotiable values (which can only be understood if placed in an Italian context), Pope Francis has shown that he does not wish to argue against the spirit of the world: he prefers to run to the encounter of the world. This approach is commendable, and at the same time carries the risk of Pope Francis remaining vague on important themes, not directly addressing the issues at the heart of the Church today.

In fact, Pope Francis acts instinctively. Monsignor Xuereb revealed in an interview that, when Pope Francis must take a decision, he prays and meditate, and when he feels something is persistently coming back to mind, he understands it is the right decision to take. So, to counterbalance Pope Francis’ instinctiveness, there is a need for someone to show him the nuances and guide the balanced dialectic needed when you are the Bishop of Rome. Who better than Benedict to advise the pope?

Benedict XVI began his pontificate acting as a professor, favoring wide open debate. Thus creating much discussion, and at the same time several controversies: but it was always the Pope speaking.

Benedict XVI later fine-tuned his speeches, calibrated his approach and found a way to express himself in a more balanced (I would say ‘Papal’) way. He only returned to the “professor Ratzinger” mode in the last part of his pontificate, when he felt free from the bounds of his ministry. Pope Francis is now called to take a qualitative jump, to really become a Pope in words and in the government of the Church.

Benedict XVI is probably the main person responsible for Pope Francis’ seeking this qualitative jump. Benedict kept the promise he made of obeying and honoring his successor, to the point of becoming an influential and appreciated adviser to the Pope.

The last interview granted by Pope Francis also opens up new scenarios for the future. Pope Francis hinted that “perhaps” there will be other Popes emeritus, leaving open the possibility that he would resign as well in the future. If Benedict XVI is still alive at that time, will there be then a sort of college of Popes emeritus?