Pope Francis, is that for Ukraine a 21st-century “ostpolitik”? Pope Francis and the generational change

Pope Francis, his idea of ​​universal brotherhood and war 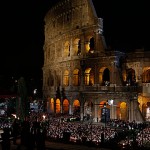 For the first time since the beginning of the pandemic, Pope Francis has presided over the Via Crucis on Good Friday at the Colosseum and not in the courtyard in front of St. Peter’s Basilica. But the first Good Friday after the pandemic was a Good Friday marked by the return of war in the heart of Europe. Since February 24, Ukraine has been under attacked by Russia, and it has been a war scenario. A scenario that even raises fear of an escalation leading to the use of nuclear weapons.

The meditations of the Via Crucis this year have been dedicated to the family. Pope Francis has wished the cross to be carried at the 13th station by two women, one Russian and one Ukrainian, who were already friends, to testify to the possibility of reconciliation between peoples.

Pope Francis wanted to exemplify his ideal of social friendship outlined in Fratelli Tutti with this gesture. For him, it was a sign that peace is possible and that this peace comes from friendship among peoples.

However, the decision provoked a broad debate. On the one hand, those criticizing the decision who underlined how the Pope had put the aggressor and the attacked on the same level. On the other hand, those who stressed that Pope Francis acted as a shepherd outside the logic of power, giving a strong signal of the power of the message of the Gospel.

Beyond the debate, some issues that perhaps have not been properly thought through are worth noting.

First: gestures, to be powerful, need a story and substance. They cannot be invented and cannot come out of nowhere. History has seen special reconciliation processes between peoples, and the Catholic Church was a main protagonist.

For example, after the Second World War, Polish-German reconciliation came at the initiative of the Polish bishops, particularly Cardinal Kominek, who wanted to put the conflict and the relationship of hostility with Germany behind them.

But why was that reconciliation a powerful gesture? Because it came years after the end of the war, the balance had been re-established, and the invaders had been driven out or had ceased to be such. And because it was the victims who launched the initiative, with the Poles even having to contend with the presence in the territory of the horrible concentration camps.

The decision had been made to promote reconciliation through a difficult path of awareness and forgiveness. And this made the event epochal.

The two women who carried the cross have already been friends for some time, and they are in Italy, a country that is not experiencing an ongoing conflict. Therefore, their friendship can be expected, showing how, under normal conditions, a Russian and a Ukrainian woman can be close, despite the conflict.

Can this kind of friendship be the model for reconciliation? Or is there a risk that it is an empty symbolic gesture? The situation would be different at the end of the war, when a joint presence of two former enemies would mean opening a dialogue. The risk is that it will remain a gesture for its own sake, which functions as a message without any real impact.

The second not-well-thought issue concerns the Ukrainians. Ukrainians are fighting a war and seeing their women raped and their homes destroyed. They cannot have feelings of forgiveness and reconciliation as these things are happening.

Reconciliation is a path, and no example, however virtuous, would ever be able to speed up the eventual process towards reconciliation. In fact, it risks the opposite.

In short, bringing together victims and executioners may not have been a good idea in this phase of the war. Especially since the executioner is still in action, and the victim does not know how long he / she will be the victim.

The Ukrainian Greek Catholic Church, the Ukrainian embassy to the Holy See, and even the nuncio to Ukraine have voiced this concern. The problem is that reconciling with those on your territory waging war is complex and cannot be enforced. A gesture will not serve to calm down exacerbated feelings. First, we need independence, freedom, and justice.

The third oversight is that the Pope is a shepherd, but he is also a head of the state and the head of pontifical diplomacy. Therefore, every gesture made by him has a global impact.

In this case, the question is about the global impact of the Pope’s gesture. When Benedict XVI gave the famous Regensburg speech – and we are on a completely different context – everyone pointed the finger at the fact that the Pope had not acted as Pope but as a professor. However, we now have a Pope who serves as a shepherd, not as a Pope, and in a particularly critical international situation.

Above all, in Regensburg, there was talk of faith and reason, in a speech that was a clear slap in the face to Europe, more than to Islam —as was previously interpreted. Nowadays we are faced with a Pope who, facing a war, proposes a scenario of reconciliation that seems to ignore the victims.

Thus, embracing the spirit of being a shepherd has led the Pope not to listen to part of the flock, the Ukrainian part. Furthermore, the Pope as shepherd did not consider the global impact his gesture could have.

In some ways, what happened is a mirror image of the pontificate. There are the good intentions of the Pope. And then some decisions that seem not well thought through, which reveal that nuances were not considered, but which are nevertheless vigorously defended by those who believe that the intent of the shepherd must take precedence above all else. But the Pope is not just a shepherd. He is the Pope. And, after all, if he takes and uses all the prerogatives of the Pope King for his acts of government, he should also think that the international image of him is not, nor can it be, only that of the shepherd.

5 Responses to Pope Francis, his idea of ​​universal brotherhood and war