Cardinal Etchegaray has passed away, marking the end of a Vatican universe Pope Francis, facing a schism? 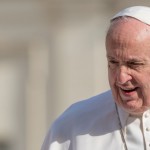 Pope Francis will ordain four archbishops on October, 4: monsignors Antoine Camilleri, Paolo Borgia, and Paolo Rudelli; and Fr. Michael Czerny. The first three were promoted nuncios (i.e., Papal ambassadors) though their postings were not disclosed because hosting governments have not given the agrément. Fr. Michael Czerny will be created a cardinal in the October 5 consistory. Before that he must be ordained archbishop, according to a canon law norm, introduced under John XXIII, that a cardinal must be at least archbishop, with some exceptions.

These four ordinations mark a transition. The Vatican Secretariat of State will be profoundly redesigned after monsignors Camilleri and Borgia will leave it for their new postings.

Mons. Camilleri served as undersecretary for relations with States. In that capacity, he signed the provisional agreement with China on the appointment of bishops, he carried forward the talks with Vietnam that will soon lead to the appointment of a resident Vatican representative to Hanoi, and he was the key man in many Holy See key diplomatic issues. After 20 years at the Vatican diplomatic service, he finally gets to the position of Apostolic nuncio. The position of “Holy See’s vice-minister for foreign affairs” is thus vacant.

The top and middle ranks of the Secretariat of State are thus changing. In the past weeks, Pope Francis replaced the director of the Office for Information and that for the administration, as monsignors Carlo Maria Polvani and Alberto Perlasca were appointed to new positions.

This “reshuffle” has a twofold result: on the one hand, it brings the Secretariat of State toward a new era, since after Curia reform something will change in its internal organization, and there should also be an undersecretary dedicated to multilateral issues.

On the other hand, the new organizational chart will leave the “old guard” of those who worked in the past in the Secretariat of State with no reference points.

The Secretariat of State changes and the college of Cardinal changes as well. The creation of Fr. Michael Czerny as a Cardinal is one of the examples of Pope Francis’ unpredictability. Even when it comes to pick new cardinals, Pope Francis looks at the people, rather than at the position; at the topics, rather than to their careers.

Fr. Czerny is undersecretary of the Migrants and Refugees Section of the Dicastery for Promoting Integral Human Development. The section is led “ad tempus” by Pope Francis, though it is formally under the dicastery led by Cardinal Peter Turkson. The dicastery has now two cardinals, and one of them refers directly to the Pope and not to his superiors. Perhaps, it would have been more logical to restore the Pontifical Council for Migrants.

Pope Francis wants to streamline the Curia, does not wish to multiply dicasteries. He does not want dispersed institutions, nor a massive production of documents. The priests of the archdiocese of Buenos Aires once asked Cardinal Bergoglio to convene a synod in the first decade of the 2000s. The Cardinal said it was better to proclaim a missionary year, as a synod was just going to produce dusty volumes that were going to stay in the shelves.

To Pope Francis, the main issue is trust. He has no trust for structures. He trusts people, and he focuses on them.

In the end, Pope Francis’ strategy seems to be “to shock and awe.” It is about shocking, breaking patterns, without letting anyone know his real intention; and then striking with decisions that seem improvised, but that are profoundly pondered.

This is the reason why every detail marks the difference. The list of the next consistory, for instance, is a heterogeneous list. Pope Francis does not behave according to only one criterion. He instead carries forward things for trial and errors.

He knows that there can be resistance to his decisions. He lived under the Argentinian dictatorship, so he is naturally suspicious and does not want anyone to disclose his plans. He wants to be the one who reveals them. This modus operandi turns into a particular obsession for secrecy, even within the Curia, and into some unpredictability.

Looking at the appointments, that Monsignor Camilleri is going to be a nuncio was not unpredictable; and neither was it that of Paolo Rudelli, who served for years as a permanent observer in Strasburg, where he did well. More unexpected was that of Borgia, who had served as assessor for only three years.

A consistory in October was almost unforeseeable because October has never been a month for consistories. However, one could easily predict the “red hats” for Tolentino Mendonça, Miguel Ayuso Guixot, Fridolin Ambongo, Juan de la Caridad and Zuppi. It was however more difficult to foresee that the Pope was going to give a red hat also to Archbishop Hollerich, Bishop Alvaro Ramazzini Imeri and Fr. Czerny.

All these thoughts converge in the ordination of the bishops of October 4. That day will perhaps be remembered as the beginning of phase 2 of the pontificate. The following day, the Pope will celebrate the consistory, and for the first time, there will be a majority of Cardinals created by Pope Francis in a conclave. In the meantime, the Pope will proceed to renew the ranks of the Secretariat of State.

Indeed, Pope Francis is set on reform. But he will decide alone, and he will seek counsel only after.

Shock and awe, then. With sudden decisions, Pope Francis is designing his Church. Official positions are less critical than trusted collaborators. It is evident that many reforms are somehow separated from the Curia reform, and that the most significant reform is about the profile of the bishops. In the end, this “Synodal Church” seems to have lowered possibility of discussion, while there is centralization in decision making. Pope Francis has his idea and a well-defined modus operandi. But this modus operandi is sometimes mysterious.