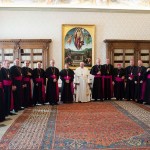 There are many interpretations for the letter that Cardinal Luis Ladaria, prefect of the Congregation for the Doctrine of the Faith, sent to Archbishop José Horacio Gomez of Los Angeles, president of the United States Conference of Catholic Bishops (USCCB). And these are all keys to help us understand both the perspectives of Pope Francis and how he has decided to tackle problems.

Archbishop Gomez had shared with the Congregation an advanced copy of a note to be adopted by the USCCB, on the theme of communion for Catholics engaged in politics who, however, support morally illicit actions, such as abortion. The not too indirect reference is to the new US president Joe Biden, a Catholic and pro-choice. The debate, however, is broader and dates back to the time of John Kerry’s candidacy for president.

It was a heated debate in the United States. Because on the one hand, the bishops want to be rigorous on doctrinal issues. On the other hand, some are seeking reconciliation, convinced that publicly refusing to give communion is counterproductive. In practice, it is the age-old contrast between “cultural warriors” and those who instead want dialogue with modernity.

Between the two, Pope Francis seems to be with the latter. The profile of bishops first appointed or promoted by the Pope is evident in this sense: they are often priests engaged in charitable activities or bishops who have shown themselves to be active in some field or social issue. The Pope does not want conflicts. He wants a Church that can be united and that can show unity.

Cardinal Blaise Cupich, archbishop of Chicago, represents the perfect paradigm for the kind of profile that Pope Francis likes for a bishop. Pragmatic in politics, Cupich also criticized the statement of the US Bishops’ Conference on Biden’s inauguration day. That statement recalled and stigmatized the president’s pro-abortion policies.

Cardinal Cupich then visited the Pope shortly after the statement. It was not a planned visit to talk about the US situation – it seems that Cupich may get a Vatican posting – but certainly, the situation in the US was discussed.

The line of Pope Francis, however, has been clear since the beginning of the pontificate. The Pope was verbally firm on the theme of the family and the principles of life, but he considered every debate on the sacraments as divisive. This was already the case in the first Synod on the family, and it is an approach that he also maintained in the exhortation Amoris Laetitia. For the Pope, communion is a matter of discernment and grace, not moral laws and sin. The theme is that of mercy that precedes everything.

Not only. Since the beginning of his pontificate, Pope Francis has asked to put aside the priority given to life issues in the debate on social doctrine, and looked instead to the poorest and the marginalized. It was a theme present in the Veritatis Gaudium instruction for Catholic universities; it is a theme that is also developed in the “new” Pontifical John Paul II Theological Institute, which has greatly expanded the field of research.

To put it briefly, Pope Francis has a pragmatic rather than a theological mindset. Big debates leave him cold also because Pope Francis tends to consider pragmatically what is not practical. The conditions for accessing communion concern, in fact, the personal situations of each baptized person. In the Pope’s eyes, deciding to exclude someone from communion is to use the sacred host as a political weapon.

For this reason, Cardinal Ladaria’s letter asks that the document of the USCCB “should be contextualized in the broader framework of the dignity of receiving communion by all the faithful, rather than by a single category of Catholics, reflecting their obligation to conform their lives to the whole Gospel of Jesus Christ as they prepare to receive the Sacrament.”

Why? Because – the cardinal continues – “it would be misleading if such a declaration gave the impression that abortion and euthanasia alone constitute the only serious questions of Catholic moral and social teaching that require the intervention of the Church.”

For Pope Francis, Unity is what leads to conclusions that he would approve of. Synodality, with Pope Francis, is resolved with centralization. This is the theme of the synods of bishops: Pope Francis wanted, in a sign of total transparency and democracy, that all the paragraphs of the final documents of the Synod be included in the text, even those that had not reached the synodal consensus of two thirds. But he also wanted the votes in those paragraphs to be made known, effectively creating a rift between the bishops, forcing them to have to deal with sections with which the majority did not agree.

Then there is the political problem. Ladaria’s letter recalls that already in 2004, a dialogue between the bishops was requested, and that “the formulation of a national policy” was suggested only in the case in which it could “help the bishops to maintain unity,” since “such a policy, given its potentially controversial nature,” could have the opposite effect and become “a source of discord rather than unity within the episcopate and the largest Church in the United States.”

Pope Francis does not want the debate on the sacraments to become a terrain of political confrontation, so he asks everyone to take a step back. But he does it, and this is another clue, without taking a clear position, but instead leaning on the Congregation for the Doctrine of the Faith.

The Pope cannot fail to say that communion is accessed only in a state of grace and that support for abortion policies in itself makes this state of grace impossible. He would go against the doctrine. He then asks his collaborators to use moral persuasion towards the bishops. This way, he also puts in the minority the approach that he does not favor.

The risk is that by taking this approach, you become as much political as you wanted to avoid being. Values are set aside to avoid a political clash. Still, in reality, a political party is favored, Catholic in name but not of conviction, which finds itself legitimized by the Catholic Church.

Instead, what is lacking is true doctrinal unity in the Catholic Church. It can be seen in many episodes: from the debate in the United States, to the synodal journey in Germany with the rebellion and the provocation of the blessing of homosexual couples, to the search for theology with an Amazonian face which – as we saw at the Synod – also includes elements that do not conform to Catholic doctrine. But it was first seen with the approach of Liberation Theology and with the opposite of liberal ideologies – two poles that Paul VI had already condemned in the Octogesima Adveniens.

After all, the debate is a replay. We are faced with the same problems photographed by Paul VI. It happens when the Christian ideal is put aside, when one thinks first of public opinion and then of faith, when one thinks in secular terms, and when one fears the risk of manipulation.

Cardinal Ladaria’s letter lends itself to various interpretations for this reason. There is the preference of Pope Francis not to get in the fight, especially when the approach he prefers would succumb in the conflict; there is the step backward of Pope Francis, who never exposes himself to dictate political lines, but leaves his collaborators to take a stand; there is the fear of Pope Francis of the manipulation of matters of faith, which however has the effect of the politicization of the Pope’s positions. There is the call to reach a unitary position on any given issue, and, when this is not the possible, to drop it. This way, even a single bishop can stop any initiative. At the end, only the Pope will remain in charge.

One Response to Pope Francis, his way of resolving disputes