Vatileaks: the Italian connection Francis, a Pope left alone at the command?

Pope Francis: How Did We Get This Far? 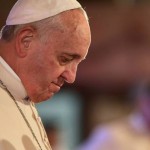 Certainly this new Vatileaks season prompts us to reflect on the way Pope Francis is carrying out his reform. Three years after the first big Vatileaks episode, it seems that the same old Vatican world that opposed Benedict XVI is still alive and active behind Pope Francis. The only difference is that this world elected Pope Francis. Pope Francis owes his election to it.

We should look back to Benedict XVI’s reform in order to understand the basis on which Pope Francis’ reform is grounded. The issues have remained the same. Pope Francis perhaps is trying to overcome them through a more protracted, difficult path. It would have been easier had Francis followed Benedict XVI’s footsteps, because the latter had already set everything in motion.

This is just one way to interpret the current stagnation. But the issue must be raised before scandals overtake any lucid reasoning about Pope Francis’ pontificate.

Pope Francis was given the primary mandate of reforming the Roman Curia by the cardinals who elected him. Many cardinals in the pre-conclave meetings asked for a streamlining of the Curia, in order to make it more functional.

Benedict XVI had the same wish. However, he addressed the issue in a softer way. He was conscious that any decision coming from above would be badly welcomed by Curia functionaries.

A change in this strategy came after the Regensburg speech in September 2006, which happened during the last papal trip with Cardinal Angelo Sodano as Secretary of State, and with Cardinal Tarcisio Bertone already officially nominated to take over the post. In Regensburg, Benedict had to face one of the biggest attacks on his pontificate. He was convinced that his most important objective should be to staff the Curia with people he trusted. This was the reason he re-established the Pontifical Council for Interreligious Dialogue, and put it under the leadership of Cardinal Jean Louis Tauran, a long-term and esteemed diplomat. Shortly afterward, he named a new president to the Pontifical Council for Migrants.

Why this change in strategy? Pope Benedict probably came to realize that he did not have sufficient strength to withstand a fight among competing parties which had developed during the last years of John Paul II’s pontificate. Over time these parties had become large and well-connected centers of power within the ranks of the Curia. Each of Benedict’s actions met with a negative reaction from within these parties. As a consequence, the papacy itself was at risk.

Pope Francis took a different course. He appointed a Council of Eight Cardinals (to which he soon added the Secretary of State) to advise him on new proposals for Curia reform and Church government. As much as Benedict XVI based his reform work on collegiality, Pope Francis has based his exclusively on some trusted advisers.

The way that Benedict XVI operated became evident during one of the periodic meetings of the heads of curial discasteries that took place January 25, 2012, right after the first leaks of the Viganò case. (Viganò was the former number two of the Vatican City State administration who was later appointed Papal Nuncio to Washington.) Cardinal Tarcisio Bertone, then Secretary of State, led the meeting, the main topic of which was the delivery of documents. Bertone’s description of the process for drafting and delivering documents provides clues to Benedict XVI’s method of working.

Benedict gave up trying to streamline the Roman Curia, but he carried forward other reforms. First among these was the great reform of charitable works and organizations. The drafting of the new statutes for Caritas Internationalis brought order to the organization. Caritas Internationalis had become so messy and independent that it contained, under its umbrella, pro-abortion associations. Benedict also issued a motu proprio with new norms for charitable organizations, thus putting the work of Catholic charities under the protection and coordination of local bishops.

By means of these two reforms, Benedict gave a well-defined identity to Vatican-run charitable agencies, thus enabling his successor to follow his lead and develop a new organization for Catholic charities worldwide, one more sensitive to the needs of people, but shaped by the Catholic teaching, not just a vague social teaching.

For his part, Pope Francis has given great impetus to the concept of charity, especially with the slogan “a poor Church for the poor.” He partially carried on Benedict’s effort, but he also highlighted the “localism” that Benedict had fought. Francis’ goal of establishing a less imposing structure, with weak connections to the center, carries the risk that the sense of the mission itself of the Church becomes lost.

The response to the pedophilia scandal was one of the jewels in the crown of Benedict XVI’s pontificate, though it was shrugged off as insignificant in many quarters. Already as Prefect of the Congregation for the Doctrine of the Faith, Cardinal Joseph Ratzinger worked hard within the Curia so that cases of abuse would not be handled only at the local level – where they were usually covered up – but that the Congregation itself would handle these cases and take appropriate measures. As Pope, he enacted these measures, and also asked all bishops’ conferences to adopt guidelines to face the abuse scandals. This way Benedict called everyone to greater personal responsibility, trying at the same time to achieve more coordination.

Pope Francis’ path has been more personalist. He established a Pontifical Commission for the Protection of Minors, and he has always made it clear that these measures came about as a direct result of his personal will. In a certain sense, he did not give much consideration to the work carried on by the Congregation for the Doctrine of the Faith.

Another much discussed topic is the reform of Vatican finances. True, under Benedict scandals broke out, and not merely in connection with the first Vatileaks. Three years before the 2012 Vatileaks, another book containing leaks, “Vaticano SpA”, was published. It was a poisoned-pen pamphlet, often inaccurate, which was founded on documents coming from the archives of a former official of the Institute for Religious Works, the so-called Vatican bank. In 2010, a scandal broke over the management of real estate owned by the Congregation for the Evangelization of Peoples. The scandal was intended to highlight curial mismanagement as well as “dangerous relations” with financial pirates. In fact, it brought to light instead the existence of a “clerical VIP” world, a mixture of Italian and Vatican people who exploited the Vatican for their own purposes.

Benedict responded to these scandals with transparency. He continued the internationalization of Vatican management (both curial and financial) with the final aim of making the Holy See strong on a multilateral level, more than on the level of privileged bilateral relations with Italy. This is the reason the anti-money laundering law was issued, improved and then substantially re-written. Another feature of this financial reform saw the issuance of new statutes for the Prefecture for the Economic Affairs, though which the prefecture became like a modern ministry of finances, a body of supervision and auditing at the same time.

Pope Francis started from this point. However, he made the decision to carry on the reform by establishing two pontifical commissions of reference (one for the IOR and one for the Holy See’s economic-administrative structure), and afterward two new dicasteries, the Secretariat for the Economy and the Council for the Economy. Obviously, these new structures generated some agitators within the Vatican walls. Their establishment was perceived as a criticism of the work already in progress. In fact, Pope Francis could have simply kept going along on the established path of reforms.

This is one of the drawbacks of Pope Francis’ pontificate. Everything has to be presented as something brand new, as different from the past. And everything is presented as a result of a clear-headed papal will. This is not just the way secular media portray the pontificate; the Pope himself wants to advertise to the world what he is doing. During the November 8 public recitation of the Angelus, he condemned the document leaks, but he also praised the “visible effects” of things already accomplished in the financial sphere.

Perhaps, the image of a pope-guarantor (which Pope Francis applied to the Synod as well) does not help this pontificate. This image can be easily exploited. The real Pope Francis is far from this image. But this image also sets up an opposition, with no reason, between the pontificates of Benedict XVI and Francis.

What is true is that under Pope Francis the Curia of former times is back, as well as ideological currents that were passé. It is not just a matter of Cardinal Walter Kasper. Even the liberation theologian Jon Sobrino, whose theories were declared “dangerous” in a Notification published by the Congregation for the Doctrine of the Faith, might have the possibility meet the Pope in a private audience. The occasion of the meeting is a conference at Urbaniana University Press about the “Pact of the Catacombs.” The Pact was drafted by a series of bishops during the Second Council in the hope of “a poor Church for poor.” The idea was given an impetus from the Second Vatican Council, but it did not then make the political claim that it did later with liberation theologies. The political use of the term was one of the moments when the “Media Council” stood apart from the real Council.

Pope Francis’ papacy enjoys wide acclaim from the media. However, the media do not report his pontificate the way it is. What’s more, we could say this pontificate is almost subservient to the power of media, as when it chose to abandon the reforms already initiated under Benedict XVI, and thought it better to carry forward these reforms with new structures and with outsourcing.

In the end, this path resulted in the second Vatileaks. Certain individuals who were hired through outsourcing were responsible for the leaks, often because they were disappointed that their proposals (which were more suitable for a business corporation than for a sovereign State) were not accepted, and more often because they wanted to exercise some influence in the Vatican. Pope Francis presents himself as a guarantor, but in the end he alone, charismatic though he is, cannot stop the current Vatican gang war. In the meantime, the new structures require a new staff. But new hirings are another cause for disappointment within the Vatican, as there is a general freeze on hiring in place since 2014. This freeze on hiring has its exceptions.

Perhaps Pope Francis was not smart enough. He established a parallel curia, thus making unhappy that “hidden Vatican” that has always been working for the mission of the Church. He wanted to show that he is the new man, something that the media also wanted, but this ambition led to further opposition within the Curia.

The second Vatileaks is less refined than the first one, and it offers fewer facts. But it is important because it signals that there will be a constant attack during this pontificate. Who knows what would have happened if Pope Francis had wanted to centralize less. Certainly, he does not have the strength to pursue the old hands of the Curia, since he owes them his election. He will remain between a rock and a hard place. Perhaps he should stake out a well-defined direction and carry it forward until the end. Were he to do so, he might accelerate the path of reforms, and make them really effective.

9 Responses to Pope Francis: How Did We Get This Far?