Pope Francis, how to get out of the crisis? 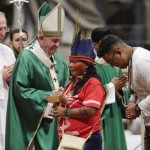 The Special Synod for the Panamazonian region coincided with one of the gravest Vatican institutional crisis of recent times. While the two events are not properly linked, they are connected symbolically.

The institutional crisis is an outcome of the search and seizures at the Vatican Secretariat of State and the Financial Intelligence Authority (AIF). As a consequence of the raids of the Vatican Police, five Vatican officials were suspended, included Tommaso Di Ruzza, director of the Authority.

On Oct. 23, the AIF Board of Directors took a clear position in a release: AIF conducted an internal investigation, ascertained that Di Ruzza operated according to the rules and advancing institutional purposes, and renewed its trust in him. Ultimately, the AIF rejected the work of the Vatican investigators.

The AIF’s position raises a lot of questions about the raid. Why did the promoter of justice decide to search the Authority and suspend its director? It is reasonable to imagine that all the actions of the director can be traced, examined, and explained. So, why was the AIF subject to a seizure under a decree that merely stated “an unclear behavior of the authority”? And why did not the investigators take the institutional route and ask the AIF about their operations?

It is an unprecedented institutional crisis, as it comes from inside the Holy See, involves prestigious institutions, and jeopardizes the independence of both the Secretariat of State and the Financial Intelligence Authority.

In addition to that, the crisis generates problems at the international level. The AIF is the guarantor of the Holy See’s obligations in terms of financial transparency. For this reason, the Authority entertains bilateral relations with its counterparts based on trust. It is a member of the Egmont Group that gathers the Financial Intelligence Units from all over the world.

There is, in the end, the risk that the crisis could have some negative consequences. The Council of Europe’s committee, Moneyval, will base the fifth round of evaluations of the Holy See / Vatican City State on the effectiveness of the Vatican judicial system. The attack on the AIF, which could reveal itself as unsubstantiated, sparks serious doubts on the genuineness of the Holy See’s commitment. In the end, the intelligence authority was under the radar by a controlled body. Something is wrong.

Until now, Moneyval generally gave positive evaluations of the Holy See. Now, the committee could be more strict on the Holy See. This could cause some setbacks. If the situation of the director of the Authority is not be clarified, the same Egmont Group could ponder whether to sanction the Holy See or suspend its Authority from the group. It was Moneyval that asked for the Holy See to be in Egmont. So, the Holy See would lose international credibility on financial transparency.

There is, then, the possibility that States decide not to entertain or not to intensify diplomatic relations with the Holy See. The scandal of the abuse was one of the reasons why Ireland, for a while, shut down the embassy to the Holy See and appointed a non-residential ambassador, with the excuse of the economic crisis.

The abuse crisis, combined with the crisis on financial transparency, could lead other countries to shut down their embassies to the Holy See. Some diplomatic relations might also be at risk.

How is this issue linked to the Special Synod for Amazonia that was just concluded?

The final document has many of the clichés we are used to. The Synod acted as a “disguised council,” with a clear agenda. Many have said that the Synod’s text was pre-drafted. Even Cardinal Christoph Schoenborn, Archbishop of Vienna, admitted during a briefing with the journalists that the president essentially wrote the Synod’s committee final document.

The document pushes issues that seemed to be overcome. It includes the possibility for the ordination of married priests, though in exceptional cases only, and it paves the way to the ordination of women deacon, which did not pass. This kind of topics are always back in the discussion, though they have been already addressed many times. Pope Francis, for instance, will summon again the commission on women deacons: the one he summoned did not get to a shared consensus.  It has been said many times that a proper response to the lack of priests is a strong vocational campaign. Pope Francis established a commission on deaconesses, that led nowhere, and another commission in the 1990s also issued its conclusions. Now, all of these topics seem to find renewed fertile ground.

However, this fertile ground is only in some small circles, as confirmed by those who say that the Synod’s outcomes were already decided. In general, everyone has a more prudent approach.

There is, in the end, a minority, a particularly active one, that pushes for reforms, though the changes do not enjoy consensus. It was the same for the Vatican financial reform.

At the beginning of Pope Francis’ pontificate, it was also rumored that the Institute for Religious Works, the so-called “Vatican bank,” was going to be abolished. It did not happen. Then, the new wave of the financial reform aimed at creating a Vatican Asset management, to unify the Holy See’s investments. The project did not work. In both cases, the majority of Vatican officials noted that it was more prudent and better to tailor a peculiar system for the Holy See, that fit international standards but also the particular character of the Vatican City State.

There have been many clashes on financial reforms, born out of a conflict of mentalities. This conflict has now exacerbated to the point of becoming a direct attack against the institution in which a minority push for a substantial change of direction.

Not surprisingly, Cardinal Peter Turkson, during a conference at the Catholic University of Milan, relaunched the idea of a unique Vatican investment fund that is the re-proposition of the Vatican Asset Management idea. The IOR, instead, describes as new things that it already did, while it does not explain the loss of 70 million euros in the last seven years (according to the new book-scandal on the Vatican by Gianluigi Nuzzi).

The news is that before everybody exploited the Holy See, but wanted to preserve the Holy See at the same time. Now, nobody cares about safeguarding the Holy See.

On the one hand, the request for a new Amazonian rite and the Amazonian exception (which could be followed by many other exceptions); on the other hand, the institutional crisis. Both of these events show an internal lobby that aims at the destruction of everything institutional and makes institutional what it was not.

If he wants to get out of the crisis, Pope Francis will have to look at the institution and defend it. And he will have to watch out for the terrorism of gossip that has often been used to kill Vatican institutions. The Holy See is the only way out. Like it or not.