Pope Francis, how will he defend a Church under attack? 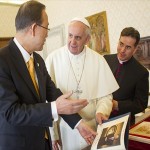 This week the Holy See will present a report to the UN Committee Against Torture. It will be challenging, especially for Vatican communications, called once more to respond to the attacks of the secular media. As it was the case for the report presented to the UN Committee on the Rights of the Child, the attacks are all focused on the sex abuse of minors by clergy. And also in this case there seems to be another end game. Id est, delegitimizing the Holy See, attacking its sovereignty, focusing on alleged contradictions. Often, the committees overreach and go beyond their  mandates,  and beyond the very spirit of the conventions.

This is how the big international organizations promote their agenda. The agenda of the counter-ideology of gender and personal freedom is promoted in a subtle way. Often, a “soft law” process is followed. The ‘soft law’ consists in pressuring states to adopt legislation domestically that reflect principles embraced in international forums (general articles in conventions and treaties, optional protocols, etcetera). Other pressures come through the “final observations” of the UN committees that oversee the implementation of conventions by the states parties. The observations are non- binding, but are nevertheless a means to influence legislation in states.

Secular media has already started to speculate that the Holy See will want to hide information about the abuse of minors by the clergy. This line of argument is misleading. The Convention Against Torture addresses different issues. And – since it is torture that it deals with – the Committee Against Torture should really be looking at the cases of children born alive after an attempted abortion and left to die (600 in Canada from 2001 to 2011). Or late-term abortion methods, such as that of “dilatation and evacuation” that really constitute forms of torture.

These are issues that may come to the fore when the Holy See presents its report regarding how the Convention is applied in Vatican City State and how the Holy See, as a moral authority, is committed and promotes around the world a culture against torture. The presentation of the report may also show some of the biases in the public controversy about the Church’s response to sex abuse of minors by the clergy, because the Holy See did reform its laws to address the issue and new Vatican procedures brought about a decrease in the number of cases of clergy abuses of minors, as data from the Congregation for the Doctrine of the Faith shows.

But these arguments may not be sufficient.

Public opinion is now very accustomed to attacks against the Holy See. Vatican communications advisers have tried to insert “positive viruses” in the secular media stream. For example, by leaking to the Associated Press that about 700 priests had been defrocked by Benedict XVI because of sex abuses of minors. The Holy See’s communications gurus have even tried to ingratiate themselves with the secular media by favoring it when it comes to breaking news, or transmitting the Pope’s words or visual footage.

The assumption behind this course of action is that it will finally make the media take note of the Catholic Church. However, this approach does not actually work. The media, under the control of publishers and financial interests that pursue specific agendas, will report objectively about the Church when there is a major event, but will not hesitate to lead the charge against her if it advances their interests.

In 2010 the New York Times stood as one of the newspapers most active in criticizing the Catholic Church over the scandals of the clergy sex abuses of minors. But before that, Accuracy in the Media had launched the campaign “Boycott the New York Times”. Accuracy in the Media showed that the weight of the leftist lobbies (those who promote the “right” to an abortion and individual freedoms, and claim the gender ideology as the only legitimate view on gender issues) swung the pendulum of every single article to fit within a preset agenda.

The qualitative jump that Vatican communications must take means going beyond the secular media. Informing public opinion about the Church correctly is something that has been perhaps missing in recent years. Sensationalism won over information. The same Pope Francis seems to be a victim of this general climate in which there are attacks against the Church, yet the Pope’s character is exalted. Pope Francis’ pontificate risks to be known as what it is not.

Last week, Pope Francis launched via twitter an appeal to politicians to defend the dignity of all.  He has upheld the indissolubility of Christian marriage. In the last general audience, he asked God, and requested all present to do the same, for the gift of understanding, which means seeing through God’s eyes. At the same time, he met the Council of Eight cardinals looking into the reform of the Curia (and the streamlining the Curia was discussed yet again). He met the newly established Council for the Economy for its first meeting, held May 2, when it discussed its statues. Finally, the members of the Pontifical Commission for the Protection of Minors gathered in Rome from the May 1 to 3 and started their works.

The Pope’s statements on the position of the Church on different issues have underscored continuity. The Pope’s series of meetings show that a reform, not a revolution in the Church, is what’s being carried forward. After one year of pontificate, the challenge for the Pope remains balancing a huge popular wave of positive feelings around his pontificate, the need for a sensible governance of the Church, and the defense of that very same Church from the attacks of the secular media.

Until now, everything seems to be going smoothly. Even the Irish premier Enda Kenny has invited Pope Francis to visit the country, following the news a month ago that Ireland would re-open the Rome’s residence of the Irish Embassy to the Holy See. The embassy was closed in November 2011, purportedly for economic reasons.

In fact, the strong disagreements between the Irish government and the Holy See about the Church’s response to the clergy abuse of minors weighted heavily on the decision to close the embassy. Nowadays, according to Enda Kenny, that issue has been overcome, since «Pope Francis has made it clear that his pontificate focuses above all on issues like social justice, poverty and human rights.»

The pendulum of Vatican communications has swung away from highly contested topics and towards social issues, which find more echo in public opinion and with governments. However, it is also true that behind the words “human rights” there are many hidden dangers. Since the Cairo and Beijing conferences, the Holy See has argued for the notion of human rights as individual rights, trying to focus on the defense of the most poor and helpless. This is something rarely encompassed in the States’ agendas and hardly ever fostered by international organizations.

Attention to the poorest and helpless is always secondary in coverage that praises the Pope only if he does take a strong stand on a sensitive issue. A coverage by a media ever ready to attack him as soon as he uses his moral authority to enlighten consciences. At the same time, the news put out by the secular media keep on eroding the notion of the Holy See as an entity recognized under international law which can legitimately engage in diplomacy. It is part of a specific plan begun many years ago, meant to exclude the Holy See from the international community of nations-states and its deliberations.

Will Pope Francis and his team be able to defend the Church from the attacks? A good response to this questions will be provided May 10, when Pope Francis reportedly would address all the heads of the agencies of the United Nations.

Austin Ruse, president of the Catholic Family and Human Rights Institute (C-FAM), said the meeting «could be  very important» if the Holy Father «takes the opportunity to call the agency heads back to their original purposes, rather than pursuing radical agendas.»

10 Responses to Pope Francis, how will he defend a Church under attack?