Is the Holy See Still Capable of Prophecy? The Church and the dissidents

Pope Francis: How Will He Defend the Legacy of St. John Paul II? 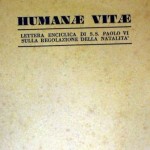 The news of a commission to reinterpret Humanae Vitae – broken first by Vatican-watcher Marco Tosatti, and later by the website Corrispondenza Romana – is in fact part of a wider issue. This issue does not deal only with Blessed Paul VI’s encyclical, but, on a wider scale, it deals with the legacy of St. John Paul II.

Humanae Vitae will turn 50 next year. Never was an encyclical more questioned. After the preparatory commissions, the decision of a courageous Pope kept the teaching of the Church intact despite pressures that even concretized in leaks to newspapers in order to generate a public opinion that turned into a real hostility to Humanae Vitae.

After Blessed Paul VI, St. John Paul II, a young and strong Pope, was the only one able to go beyond the post-Second Vatican Council debates and to reaffirm the doctrine of the Church, presenting original thinking about sexuality and man that the Polish Pope outlined in his famous “theology of the body.”

How the theme is crucial today is shown by a fact that cannot be underestimated, especially if we give an eschatological meaning to everything: the Pontifical Institute John Paul II for Studies on Marriage and Family was to be inaugurated by John Paul II on May 13, 1981, the day when the Pope was the subject of an assassination attempt.

In the course of the years, the Institute represented the main theological outpost of Catholic thought in sexual and marital issues. The Institute studies the entirety of the subject on a global scale, and its academic community is involved with real life experience and the study of urgent issues. Among the members of this Institute is Stanislaw Grygiel, a former friend of John Paul II, who still teaches a class on “Sexual identity: development and formation or choice?”.

Until now what this community of scholars thought was clear. Nowadays, the Institute is living through a transition. Up until last August, Msgr. Livio Melina was President for eight years, and during his tenure he focused mostly on moral issues. Last August Pope Francis appointed Msgr. Pierangelo Sequeri as President, a well-known theologian, also known as a composer and musician.

At the same time the Pope appointed as Grand Chancellor of the Institute Archbishop Vincenzo Paglia, who is also at the helm of the Pontifical Academy for Life. The archbishop, who is President Emeritus of the Pontifical Council for the Family, is charged with guaranteeing that one of main guidelines of Pope Francis’s pontificate is pursued: that of dialogue and of the culture of the encounter.

How is Paglia pursuing dialogue? One example is provided by the recent choices of the new members of the Pontifical Academy for Life. The new membership includes conservative professors but also a pro-abortionist Anglican theologian. Paglia said that the rationale is to open the Academy to dialogue with all positions, because “the Church’s position will be able to convince everyone.”

This is the new line taken at the John Paul II Institute. Among its teachers is Msgr. Gilfredo Marengo. He recently reached a wide audience through articles he published in Vatican Insider – articles that were subsequently mentioned by Corrispondenza Romana. In one of these articles, he invited readers to “abandon the notion of the Church’s doctrinal patrimony as a closed system, waterproofed against questions and suggestions from the here and now in which the Christian community is called upon to give reasons for its faith, as announcement and testimony.”

In a March 23 article on the “Parallel histories” of Humanae Vitae and Amoris Laetitia, he compared the dialectic “contraceptive pill yes / contraceptive pill no” to the topic “communion to divorced and remarried yes / communion to divorced and remarried no.” These two dialectics – he objected – represent “discomfort and fatigue.” He added, “Anytime the Christian community falls into the error of proposing life models that are derived from too many abstract and artificially described theological ideals,” the same community builds “life models that are abstract and artificially rooted.”

These words somehow remind one of the Lineamenta (guidelines) of the of the Synod on the Family in October 2015. The working document asked participants “not to present pastoral models that are mere applications of doctrine,” as if doctrine were just an abstract thing, with no links with realities. These words also remind one of the debate that has taken place ever since the Synods on the family: the difficulty in achieving a Christian ideal, the need for gradualism, the need to include everyone and accept the seeds of the good in any situation. The discussion went on to touch the primacy of conscience, which it examined and then certified in the Apostolic Exhortation Amoris Laetitia. In Amoris Laetitia, discernment is a milestone upon which everything is based.

Msgr. Marengo’s story speaks by itself. He was hired by the Pontifical Institute John Paul II for Studies on Family and Marriage when (now Cardinal) Angelo Scola was Rector of the Pontifical Lateran University. He wrote several books and articles about pastoral care and doctrine.

Answering a question, Marengo denied any “imaginary reconstruction” concerning a commission to reinterpret Humanae Vitae. “Certainly,” he said “I don’t think the theme of a reconciliation of Humanae Vitae and Amoris Laetitia is part of the current agenda. I find it dangerous to invent responses to useless questions.”

“Certainly,” he added, “theological and pastoral reflection has still a lot to do in order to gain an adequate and fruitful understanding of both Paul VI’s and Francis’s texts.”

However, the fear surrounding a commission mirrors a very strong debate behind the curtains that recalls the debate between progressives and conservatives during the Second Vatican Council and shortly after.

Humanae Vitae has been widely discussed. Many times a distinction was made between the theory of Humanae Vitae and the practice of many Catholics. For its 50th anniversary, many publications will be issued on this same question. Is this Msgr. Marengo’s goal?

It may be. However, the group allegedly gathered around him is not a commission appointed by Pope Francis. It is mostly a study group, and it is likely they will come out with a paper on the issue. If this paper is published, it will have an impact.

According to Corrispondenza Romana, the study group involves Msgr. Pierangelo Sequeri. Another member of the group is Professor Philippe Cheneaux, a well-known authority on the history of the modern Church. Msgr. Angelo Maffeis, President of the Paul VI Institute in Brescia, is also working with the group.

It would not be a commission, then, but a research group. The final aim of this research would be to give a new perspective on Humanae Vitae, 50 years after its promulgation. Pope Francis is apparently not the initiator of the project. He was informed of it, however, and he encouraged it, according to the principle that has always distinguished his pontificate.

We are in the field of speculation. If these speculations are true, there are two possible readings. The first is that the Pope is well aware that what is going on is a plan to restore a kind of theological thinking that seeks to erode Christian doctrine; the second possibility is that there is a well-defined agenda working behind Pope Francis’s back, which aims to change a doctrine that the Pope is unwilling to change.

If this latter is the case, it must be said that the agenda is very well structured, and that the work is being carried forward precisely.

However, we should enlarge the view. Re-reading Humanae Vitae in view of Amoris Laetitia would just be the last of a series of new interpretations based on Pope Francis’s documents. For example, it is said that the Congregation for the Clergy has required the application of Amoris Laetitia and Evangelii Gaudium as a criterion for admitting and promoting candidates for the priesthood.

In the end, papal addresses in “light” documents – not encyclicals, but apostolic exhortations – are exploited in order to generate a “habit of thought” that can then take root – in the same way that the rationale of discernment has always been followed, since a confessor is hardly unable to understand when the sin is a voluntary one and when it is not, or when a sinner has repented and when he has not.

The Pope’s words are then employed in other publications, and their authors seek the Pope’s backing. This happened, for example, with the interpretation of Amoris Laetitia published by some Argentinian bishops: the Pope’s document was given a very progressive interpretation, but the bishops took cover behind a letter from the Pope that approved their rationale.

This is how the propaganda machine works. It is a complex mechanism, as it involves people outside of the Catholic Church. But they are good allies. No one speaks about those words of Pope Francis that condemn ideological colonization and gender theory while they also commend the natural family. Instead, Pope Francis’s less controversial themes are emphasized, such as the war on poverty and human trafficking. Pope Francis never takes a sharp position. He has always maintained that he wants to evangelize via attraction, and controversies are really not attractive.

This is how the Pontifical Institute John Paul II for Studies on Family and Marriage comes into play. Given that it is not possible to dismantle its academic-doctrinal setting, it seems that a merger with the Lateran University’s Institute “Redemptor Hominis” is being considered. Redemptor Hominis is the Lateran’s institute dedicated to pastoral theology, a subject that has often been compartmentalized away from pastoral care, as if the latter needed no theological foundation.

In this way, the particularity of the Pontifical Institute John Paul II for Studies on Family and Marriage will lose some traction, and issues concerning morality and life will be diluted with other pastoral issues, in adherence to the notion that the pastoral must not be subordinated to the doctrinal.

The institutional steps need to be undertaken quickly, because without a good academic–theological structure, any innovation in the Church’s thinking will just be a waste of time, with no consequences.

This is the reason that they work in the full light of day, without seeking any cover, trying to promote projects like the re-interpretation of Humanae Vitae in light of Amoris Laetitia in a semi-official way, as if the Pope himself had appointed a commission.

If no important publication is produced, any discussion will just remain a discussion. A groundbreaking pontificate in terms of the communication of faith risks turning out to be just a transitional pontificate unless the Pope makes a courageous decision by strongly defending St. John Paul II’s theology and by leaving aside any kind of working group that forms itself around him. This is how the Pope could leave the Catholic Church an important legacy, one from which the Catholic world could gain immensely.