Pope Francis, if the Church does not know herself 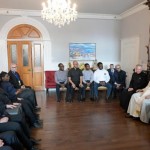 There are no striking revelations in the conversation. There is, however, the sense of Pope Francis’ way of thinking, which cannot fail to make us reflect if read against the
light of the statements that the Pope made in the press conference on the return flight
from Canada.

Speaking with the Jesuits, the Pope spoke of the evolution of canon law regarding abuses and said: “Law cannot be kept in the freezer. Law accompanies life, and  life goes on. Like morality: it is improving. Before, slavery was lawful. Now not anymore. The Church today said that even possessing the atomic weapon is immoral, not just its use. This was not said before. The moral discourse is progressing along the same organic line”.

In the words of the Pope, we can see a particularly pragmatic reduction of the questions of life. But the point is different. The practical reduction also leads to knowing and understanding the Church pragmatically. The principle, after all, is that “realities are more than ideas,” as the Pope said in Evangelii Gaudium.

However, if that had been the case, the Christian perspective could not have spread so widely. The issue of slavery, in this, is exemplary.

The Pope was not referring to the acceptance of slavery by the Church. However, Archbishop Victor Fernandez, his theologian of reference, did so during a press conference of the 2014 Synod of Bishops.
But it is precisely on slavery that a profound distinction must be made between the Church and the world. The Church has never accepted that men were enslaved. At the beginning, the Church accepted slavery as a human institution, but that doesn’t mean she wasn’t against it.

Jesus never spoke of subverting the world’s order but instead of changing people’s hearts, of a new conception of man that creates a new civilization.

Popes Pius I and Callisto I had been slaves. In the 7th century, the British slave Bathilde was canonized.
Not to mention the various councils that had spoken out against slavery or that protected slave refugees, who asked for the freedom of the enslaved people and even discussed the slave trade.

Then, if we want to emphasize that several Christians, priests, and bishops have not followed the Christian message, this is true. But it was the Christian exception that led to the abolition of slavery in Europe, and this is proven by dozens of statements taken by the popes—starting with the bull Pastorale Officium of 1537, written by Paul III, which condemned slavery under penalty of ex-communication.

The bull followed a decree of Charles I, which condemned the slavery of the Indians. And here, we must broaden the field of history to understand how the Catholic kings of Spain, in reality, never favored enslavement. Angela Pellicciari, in two volumes (“A history of the Church” and “A unique history”), defines how the Catholic kings of
Spain never interpreted the colonization of America as the appropriation of the land but rather as a form of evangelization. Queen Isabella forbade making slaves in the new world, and when Columbus returned once with slaves, they were sent back to America with many apologies, and Columbus was put in jail.

Instead, the Spanish success in Latin America, Pellicciari argues, comes precisely from the fact that they brought the idea of a God who cares for every man, thus collapsing the mighty Aztec empire that stood in terror and sacrificed men and children.

The so-called “Doctrine of Discovery” also comes from this context, from this ideal of evangelization, already defined in 1455, before the discovery of America, with the bull Romanus Pontifex. But this was not a Church doctrine. It was a worldview that concerned those times. The other activities of the Popes have surpassed it. It has been
overshadowed by history.

Pope Francis, however, did not say this. Instead, in the press conference on the flight back from Canada, he replied vaguely, so much so that the press went so far as to say that the Pope had not adequately explained all the issues. Yet, it would have been enough to contextualize, to explain. The Pope finally said he did not speak of Native American “genocide” in Canada because he did not think about it. But this is also an issue: genocide means the
systematic elimination of a people, and the cultural assimilation to which the indigenous people were subject, however brutal or violent, is another thing.

The issue here is that a secular world wants to rewrite the history of the Church, denying what it once was. And there is, unfortunately, a Church that does not know itself and does not know how to defend and explain what it is, what it was, and her history.

Everywhere, it was missionaries who learned and preserved indigenous languages, who protected their culture from assimilation. They did so amid great discussions within the Church, sometimes with fatal indecisions on the part of the Popes, but always with a clear goal in mind.

If everything is reduced to a pragmatic and non-theological reading, if the hermeneutics of time is not applied, and there is no attempt to explain what moves the Church, then the Church cannot be understood.

For the Church, it is not a question of remaining on the defensive but somewhat of presenting what she is. And the same goes for the Pope, who – he told the Jesuits of Canada – always speaks on behalf of the Church. It is difficult, however, to think that the Church appreciates being reduced to the gesture of a Pope’s apology and attacked because as an institution does not do the mea culpa while the Pope does.

4 Responses to Pope Francis, if the Church does not know herself