Pope Francis: A Church Progressively Under Attack? Pope Francis and the University Visit that Benedict XVI Did Not Make 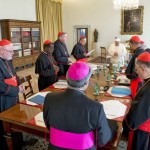 Today the 18th meeting of the Council of Cardinals begins. Its goal is that of carrying forward an ongoing reform started almost four years ago. In the end, the Curia reform was one of the mandates Pope Francis’ received during the pre-conclave meetings from the cardinals who elected him. It is not by chance that Pope Francis, in his Christmas speech to the Curia,  focused on the Curia reform, with a detailed list of the steps taken.

However, this reform seems to be incomplete, for three main reasons. First: the review of the Pastor Bonus, the apostolic constitution that currently regulates the role and functions of the Roman Curia, is scheduled to conclude by 2018. Second: some items of the reform have already been adjusted, and Pope Francis himself apparently implemented a change of pace, moving from the preconceptions of external consultants to the notions of the consultants from within the Vatican. Third: Pope Francis’ real reform is that of the profile of bishops, and even in the Curia reform he wants to emphasize above all the aspect of conversion.

It was Fr. Antonio Spadaro, editor of La Civiltà Cattolica, who explained this just days after the Pope’s election, while commenting two texts by Cardinal Jorge Mario Bergoglio and comparing them with St. Ignatius of Loyola writings on conversion.

In Fr. Spadaro’s words, when Pope Francis speaks about corruption, he is not thinking of the socio-political phenomenon, that is in the end a consequence of something deeper. He is rather thinking of that attitude of the human being that denies truth, allows frivolousness to overcome spiritual severity. In the end, Cardinal Bergoglio’s texts are filled with the strength of Ignatius’ spiritual exercises.

The sense of reform, for Pope Francis, is really the conversion of hearts. In striving to achieve it, structure is secondary. For this reason, the work of the Council of Cardinals is apparently stalled, and even marginal for the reform itself, as Pope Francis has been ahead of the Council in taking the most important decisions.

Where to begin then, for the Cardinals? During the summer of 2016, two pieces of reform were implemented: the establishment of the Dicastery for the Laity, the Family and Life (Aug. 17) and of the Dicastery for the Service to the Integral Human Development (Aug. 31). Two previous steps were the establishment of the Secretariat for the Economy (Feb. 24, 2014) and of the Secretariat for Communications (June 27, 2015).

The dicastery for Integral Human Development takes over the responsibilities of the pontifical councils for Justice and Peace, Cor Unum, and Migrants and Healthcare Workers, and is presided by Cardinal Peter Turkson.

The Dicastery for the Laity, the Family and Life integrated the competences of the pontifical councils for the Laity and the Family – plus the Pontifical Academy for Life – and responds to the needs of placing laity at the top of dicasteries, with the same rank of ordained ministry and religious. Prefect of the new dicastery is Cardinal Kevin J. Farrell.

In the mean time, the Secretariat for Communications is tackling a complex task, as it involves the coordination of several Vatican entities with about 700 employees. They are: Vatican Television, Vatican Publishing House, L’Osservatore Romano, the Pontifical Council of Social Communications, Vatican Radio, the Holy See Press Office, photo and internet service, and the Vatican typography. Currently, “Vatican Radio” no longer exists as an official entity standing, its middle wave broadcasting has been shut down and so will its short waves, in anticipation of the launching of a big news portal that should include CTV and Vatican Radio contents. It will be a large main hub, centralized, that risks to dissolve that space of freedom in the management of news that permitted the Vatican official channels to go beyond the news, and to take personal initiatives.

The Secretariat for the Economy was originally launched on July 18, 2013. It is structured with a top reference point, the Council for the Economy (composed by 15 people, 8 of them bishops or cardinals); the Secretariat, which prefect is Cardinal George Pell; and the office of general auditor. However, many things needed to be adjusted, including its statutes, which attributed to it both the role of overseeing operations and managing the money.

In general, for what concerns the Vatican economic reform, it seems there was a wrong perception of the situation, which also led Cardinal Pell to take unfortunate steps: for example, the announcement of secret accounts that in fact were just not part of the revenue sources for the regular budget because they were meant to be at the Pope’s disposal; the continuous and expensive involvement of international agencies, as prestigious as they were unfit for the Vatican complexity; and the high salaries and expenses for collaborators and offices. Something more than one year after its establishment, on Feb. 22, 2015, the statutes of the Secretary for the Economy diminished its duties, and the motu proprio “The temporal goods” issued July 9, 2016 provided a further separation between oversight and administration duties.

A small reform within the Institute for Religious Works, the so-called “Vatican bank”, was concurrently started. With the 2012 MONEYVAL report on hand, one can note that the so-called Vatican bank operated according to transparency standards that were even higher than those strictly required, and that a screening of the accounts had already started. Despite all of this, at Pope Francis’ suggestion, the IOR undertook a further screening of the accounts, carried by an external company, while the commitment to transparency was fulfilled with the annual publication of the balance sheet.

In general, the legislative framework to strengthen Vatican finances followed the tracks designed by Benedict XVI. The Financial Intelligence Authority, the Vatican financial watchdog, had new statutes, a new board and new top ranks that carried forward the work started.

We are however talking about technical details. In order to understand what is the rationale behind these reforms, one should glance at Pope Francis’ speeches to the Curia: the 2016 one presented the list of things done (including the first commissions, that were involved in the Vatileaks 2 trial); and the 2014 and 2015 ones, with the list of Curia maladies and the virtues people of the Curia were called to nurture.

However, it is difficult to find operational clues in Pope Francis’ speech. The Pope himself makes the decision, and the Church is adapting to his spirit. As the Pope does not want documents produced just to be shelved, dicasteries are not producing so many documents any more. There is another reason why there are fewer curial dicasteries: decentralization. Papal documents often quote documents from Bishops’ Conferences, and Pope Francis’ approach is that of entrusting bishops ever more responsibilities.

This approach is not without risk. For example, centralization was needed to tackle clergy sex abuse scandals because local bishops were not reporting cases of abuse. The Pontifical Commission for the Protection of Minors was thus called to create more awareness in Bishops Conferences, studying and proposing guidelines. However, there is a long way to go still.

Given this, is a new season of bishops’ documents in the offing? This is yet to be determined. The Church needs a guide, and looks at Rome for this and for general coherence. In general, collegiality never questions Rome’s centrality. What is apparently behind Papal decisions is an anti-Roman movement that began in the dioceses of the peripheries. This movement particularly developed in countries where the Protestant Reformation is more spread.

The Secretariat of State deserves to be discussed separately. It is somewhat overshadowed by the other two secretariats, though it keeps a central role, thanks to a Papal rescript that confirmed the Curia status quo while reforms are taking place. The Secretary of State is Cardinal Pietro Parolin, a skilled diplomat, who is particularly engaged in the international field: he travels frequently –he just came back from a trip to Africa, where he visited Madagascar and Congo-Brazzaville. Parolin launched the idea of an office for international mediation within the Secretariat of State, which would not represent major changes to the general structure, but would be a very significant development in fact. The Secretariat of State has wanted to show itself active in mediation, from the normalization of US-Cuba relations to the mediation in Venezuela, to the difficult agreement with the Chinese government for the appointment of bishops and to relations with Vietnam, passing through a constant focus in the Middle East that brought Pope Francis to make Mario Zenari, nuncio to Syria, a Cardinal.

Yet, all of these reforms seem to be incomplete, without an internal coherence, and stuck in an eternal discussion that makes the Church live as if it were in a State of Permanent Synod. And this is the starting point of the Council of Cardinals that begins today.