Benedict XVI, seven years after Pope Francis Rules Whereas Paul VI Reigned. Does the Vatican need a ruler or a king? 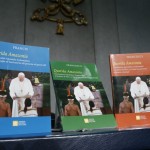 The post-Synod exhortation Querida Amazonia did not even mention the possibility to ordain married priests in exceptional cases. Nor it suggested the possibility of having deaconesses or the establishment of an “Amazonian rite”. Concluding the Pan-Amazonian Synod, Pope Francis instead described his dreams for Amazonia, which are, in fact, dreams for the whole Latin American continent. He called for praying for vocations. He asked for more missionaries. There was not, by the way, the expected breaking with the tradition of the Church of Latin rite.

There is only one question: were expectations legitimate? Pope Francis supported the priestly celibacy in many declarations, and he also clearly stated that he did not feel like changing the discipline of celibacy. The final document of the Synod tried to push the Pope toward that direction: that was the purpose of the paragraph that noted that celibacy is not a necessary condition to be priests. However, Pope Francis did not even consider the issue.

Since the beginning of the Pontificate, the environment around Pope Francis pushed for a change in Church teaching. People with a well-defined theological hover over the Pope. The agenda was that of the so-called progressive wing of the 1970s. An old agenda, mostly surpassed by history,
that found echo in the media and created new expectations.

Benedict XVI clearly explained this theological agenda when he met Swiss bishops in ad limina visit in November 2006. Benedict XVI said: “I remember, when I used to go to Germany in the 1980s and ’90s, that I was asked to give interviews and I always knew the questions in advance. They concerned the ordination of women, contraception, abortion, and other such constantly recurring problems”.

When Pope Francis was elected, there were a lot of expectations for a new doctrinal wave. These expectations rose when he spoke about “a poor Church for the poor,” using a catchphrase of Liberation Theology. Ever since, every decision taken by Pope Francis has been described as the beginning of a revolution for the Church. This revolution never took place.

The two commissions on finances and the Institute for Religious Works substantially led to a confirmation of the Vatican financial framework. The most recent developments even led the Vatican finances back to the privileged bilateral relation with Italy.

Even the discussion on Amoris Laetitia and the care for divorced and remarried Catholics produced a middle road that values the “case by case” approach. On the issue of declaration of nullity of marriages, Pope Francis was pragmatic and emphasized that the bishops are the supreme judges. Pope Francis’ document Magnum Principium on the approval of the translations of the Missal and ecclesial texts delegated some of the competencies while keeping a central control.

Pope Francis’ anti-institutionality is derived by a particular Latin American rationale: that the leader shapes the institution, and not vice-versa.

During these seven years of pontificate, the media fed the audience with the myth of the revolutionary Pope, despite Pope Francis’ pragmatic, and not dogmatic, approach to issues.

Pope Francis’ pragmatism has been, in many cases, misinterpreted for a breach with traditional teaching. It was, in fact, a pragmatic approach to a practical issue. When the Pope carries forward a pragmatic approach, there is the risk that it is perceived as an institutional move, and so as a change in Catholic teaching.

Pope Francis’ ultimate goal does not seem to be that of changing the doctrine. Pope Francis instead wants to give the outward bounds more dignity, and above all, to provide a renewed pride to Latin America. In Uruguayan philosopher Methol Ferré’s vision, Latin America is called to become a continent that is a “source” of thought, able to be a major intellectual actor in the world. This is also Pope Francis’ view, which fills the narrative of the dream penned in the Querida Amazonia exhortation.

Pope Francis’ document cannot be but a disappointment for those who were expecting a change in the discipline of celibacy since the exhortation does not even mention the word “celibacy”. In the days before the publication, some of the more progressive media, likely aware of the text that was going to be published, noted that Pope Francis was perhaps halted on the path to reforms by the party of conservatives. It was likely a way to save the narrative on the pontificate.

The truth is that the text of the exhortation was finalized on Dec. 27, 2019, and signed on Feb. 2, 2020. That means that not even the book by Cardinal Robert Sarah and Benedict XVI on celibacy, out in January, had an impact on Pope Francis’ position. Pope Francis decided, and decided this way, independently from the opinion of the majority of those he sough counsel from on the issue, and also the Pan-Amazonian Synod.

Pope Francis’ behavior was the same as Paul VI in drafting Humanae Vitae. There are some crucial differences, though. It was proven that Paul VI did not act alone against the opinion of the majority. He instead pondered all the points of view and also had strong backing in supporting the traditional teaching of the Church. The campaign on Humanae Vitae was conducted to prevent Paul VI from taking the position he finally took.

Pope Francis, on the other hand, left the discussion open and encouraged it, since he believes that “time is greater than space” and that it is necessary to “open processes”. Many felt inspired by this opening and thought that the Pope fully shared their ideas.

In the end, Pope Francis made his own decisions, that fit his ideas. The exhortation is filled with Pope Francis’ Latin American dream, permeated by the Simón Bolívar dream. Pope Francis set on this narrative since the trip to Panama for the 2019 World Youth Day.

Listening to the Pope was then enough to understand his approach. True, it is easy to say that from hindsight. Sure, the disappointment of the most progressive circles is enormous, and it is yet to be seen whether Pope Francis will change this feeling or not.

By mentioning the Synod’s final document (which advocated for married priests) in paragraph 3 of the exhortation and give it an official status, Pope Francis might have left a door open, without actually opening it. At the moment, there is a lot of disillusionment among those who were looking for a more liberal exhortation to carry forward their theological views.

After seven years, Pope Francis might then lose the unconditional support of a particular part of the Church that backed him. Time will tell if this lost of support will turn into open dissent. If this were to happen, the Querida Amazonia might be rightly described as the Humanae Vitae 2.0.

3 Responses to Pope Francis, is Querida Amazonia the Humanae Vitae 2.0?