Pope Francis, is the Church crisis a clergy crisis? 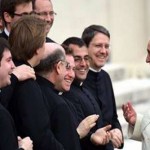 Pope Francis’ decision to convoke all the presidents of bishops’ conferences of the world to Rome, to talk about the abuse crisis, is unprecedented. As a response to the 2010 annus horribilis of the abuse crisis, Benedict XVI urged that all bishops’ conferences set guidelines to face the issue. Never, however, had bishops been called to Rome to talk about it.

Pope Francis’ decision can be seen from different perspectives.

First of all, Pope Francis wants everyone to be aware of the situation. He acts as a guarantor, listens to everyone and then makes personal decisions. Rather than collegiality, he prefers making personal decisions after broad consultations. De facto, he is a Pope who does not delegate too much. Perhaps because he has seen delegates betray their missions.

This explains some of his decisions at the beginning of the pontificate, like the hiring of external consultants that also fed the Vatileaks wave that seemed to be over, or his surrounding himself of trusted people before making decisions, without listening to anyone else, and to the point of not communicating to his collaborators the timing of consistories for the creation of new Cardinals.

Secondly, Pope Francis makes pragmatic decisions. Confronted by the crisis, he seeks a concrete and immediate solution, and if he cannot have one, he waits. Pope Francis does not believe in general in short-terms fixes. He always talks about a conversion of hearts. But his solutions are often dictated by circumstances, by the need to have things done.

In the end, it can be said that Pope Francis does not build wide frameworks that encompass reforms. He is rather one who puts reforms into given frameworks. This is often spelled as a “lack of vision,” although Pope Francis prefers to call it “reform made in the walking.” However, everything is left in suspension and needs to be finalized.

Third, Pope Francis’ need to immediately tackle issues brought him to mostly focus on urgent issues. The release issued at the beginning of his latest meeting with the Council of Cardinals, last Sep. 10, said the Cardinals asked the Pope to reconsider the group’s composition.

Before the meeting, it was rumoured it was the last meeting of the Council as we knew it, as some of the Cardinals where going to be changed, others confirmed, and a Canon law expert was going to be recruited to provide harmony to the Curia reform proposal.

The abuse crisis delayed this plan, and another meeting of the Council was set for Dec. 10-12, while the final release did not talk about any specific experts, although experts were consulted. In the end, the meetings will keep going as previously established, and the Council of Cardinals will keep the same composition, though some of them are very old, like Cardinal Errazuiz, that in Chile was involved in the abuse cover-up.

This is a sign that the abuse crisis is a burning issue, not only because of the latest revelations, and that it is the highest priority in the Pope’s agenda.

This could be a problem, as the abuse crisis is part of a more general problem. In his letter to the people of God delivered in the midst of the outcry over the Chile abuse crisis, Pope Francis identified clericalism as the evil that led to a cover-up culture. In the exhortation Gaudete et Exsultate, the Pope also identified gnosticism and neopelagianism as two sources of this culture.

Beyond this wider glance to reality, discussions are being carried forward on a very particular issue, that is the fight against abuse. Pope Francis, in his dialogue with Jesuits in Ireland, spoke about healing and listening to victims. These are needed steps.

On the other hand, this crisis needs something more than guidelines and pragmatic recommendations. This is a clergy crisis, because there is often a clergy that does not really believe in God any more, or believes but behaves as he does not believe, almost giving no importance to faith.

Scandals also revealed not just a culture of cover-ups, but a culture of malfeasance. They are power transactions that sometimes also include sex.

It is an issue wider than clericalism, and should be faced not just from the perspective of a pragmatic approach, but rather from the perspective of a visionary approach. First of all, choosing a Christian terminology, from the words healing to that of redemption, to replace the secular terminology that has now taken over also in discussions within the Church. This is how a new long-term system, that also corresponds to the peculiarities of the Church, can be established and work forever.

In the end, it is not jut about issuing specific norms to tackle the issue. It is rather about creating an adequate framework, both cultural and legal, that everyone will be able to adhere to, and that meets the goal of the Church to be strong and in particular to protect children.

So, there is an important aspect missing in this discussion: education. Likewise, in the debate about Curia reform, theology was missing in a big way. In both cases, these narratives are still incomplete.

During the week, Pope Francis met the American bishops; highlighted his dialogue with Irish Jesuits; and convoked all the presidents of the Bishops’ conferences to talk to him expecting measures from them.

In this same week, Archbishop Georg Gaenswein, the Pope Emeritus’ secretary, delivered a speech that actually nailed on the head the current situation.

The coincidence is striking.

Archbishop Gaenswein described the abuse crisis as the “Catholic Church 9/11,” and looked at the very roots of Christian life, providing many quotes by Benedict XVI to tackle the current crisis.

Archbishop Gaesnwein mentioned Benedict XVI’s denounciation of the filth in the Church in the 2005 Way of the Cross in Rome; his request for forgiveness for the abuses in the Shrine of the Immaculate Conception in Washington in 2008; and his words on the flight to Fatima in 2010, when Benedict XVI spoke about the scandal of sin within the Church, an often underestimated internal enemy.

Archbishop Gaenswein also quoted Benedict XVI’s words on monasticism as the foundation of civilization, the story of the birth of a new society that was started by those monks who retired with St. Benedict and made of “ora et labora” (pray and work) their rule. To these monks – as Benedict XVI said in the Colleges des Bernardins in France in 2008 – studying and copying ancient manuscripts was part of the main scope of their lives, quaerere Deum, seeking God. This seeking God is at the basis of Western civilization.

This way, Archbishop Gaenswein reminded us there is a wider perspective, where the response to the scandal can be framed.

No guidelines or procedures to counter abuse will ever be able to heal the Church. What is needed is a pragmatic reform within a wider framework, a general conversion that could make it possible to face the crisis of the clergy.

A question remains : beyond the good will to change approaches and face the crisis, will Pope Francis’ reforms be enough, or will they fall short?

This question can be applied to everything: from the Curia reform, that is missionary from the very title of the news Constitution (Praedicate Evangelium) but then was framed in pragmatic approaches to certain issues, rather than a serious change of mentality; through the pastoral push, that lately risked setting aside the real teaching of the Church; to the doctrine itself, as even the theological debate seems to be stuck.

There is a need for great thinkers, able to step out of the current world to start a new civilization. This pontificate especially needs them.