The Viganò issue Pope Francis, is the Church crisis a clergy crisis?

Pope Francis, is the crisis new? 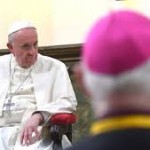 The crisis that has emerged after the publication of Archbishop Carlo Maria Viganò’s testimony is not a new crisis within the Catholic Church. It is part of that same thread that started with the publication of the letters of the same Archbishop Viganò in 2012. This thread led to two Vatican trials, a series of debates and attacks, and now to this new media discussion. In the end, until now we have been talking about Vatileaks 1, 2 and 3. The reality is that Vatileaks never ended.

This thread is not directed to the Pope, but to the institution of the Papacy in general. The request for Pope Francis’ resignation at the end of Archbishop Viganò’s letter is particularly revealing in this sense. This kind of pressure was already present in the first Vatileaks, when no one thought a Pope could ever renounce, and so the target was the people of the Papal entourage. Even in that case, it was a way to disempower the pontificate.

Now that a Pope has renounced, the idea spread that it is possible to press the Pontiff, to the point of calling for his removal when things are not a particular way. Beyond any criticism on possible mistakes, what is under discussion is not the Pope’s work, but whether the Pope should remain in place given his alleged mistakes. It is really a wider issue.

Attacks have always focused on very specific issues, overshadowing a global view. In the end, a detail is considered the general framework, and fingers are pointed at that very detail. The old anecdote of a person pointing the finger at the moon and a silly person looking at the finger while the wise person looks at the moon is always valid.

In Pope Francis’ case, Cardinal McCarrick’s issue was used as a sort of detonator, and the abuse crisis, that broke in Chile during a particularly difficult trip for the pontificate, was the picklock levered to spring the allegations. Archbishop Viganò noted that the Pope already knew about McCarrick, and for this reason the Pope was not being coherent with the zero tolerance line he was carrying forward, and so he should resign.

Another matter of criticism raised against the Pope is that of doctrine, particularly after the Amoris Laetitia apostolic exhortation. Even in that case, there was an open space to fill, since Pope Francis’ pastoral preoccupation – and his willingness to leave the door open for discussion and to conscience – left room for an ever open discussion.

Even in that case, the starting points were particular details. It must be clear: there are many who participated to the discussion, in more or less harsh terms, because they were sincerely concerned about doctrine and the way doctrine was going to be presented. The four cardinals’ dubia, released to the press after the Pope did not respond to them, were part of a genuine pastoral preoccupation. Those questions will be kept open, for as long as a pope does not clearly respond. Many cardinals and bishops also spoke out, who indeed criticized some of the Pope’s approaches, but always keeping full fidelity to the Church as an institution.

The issue of the governance of the Church is another, more concrete issue that in fact does not seem to warm hearts. It is a pragmatic issue, but it is about a discussion within the Catholic Church, and seem to be interesting only with regard to the possibility of the Holy See changing its approach in a secular world, and to be “more open.”

All of these discussions take a political connotation when they reach the media, or, even worse, a thought that does not belong to the Church finds its way into the discussion and is used even to try to overturn the Church. These political moves are initiated emphasizing the conflict, focusing on the discussion among parties, taking the positions that are closer to a general way of thinking.

Setting the gaze farther, it is not only that Vatilekas is not over: it did not start under Benedict XVI. The release of Bl. Paul VI’s Humanae Vitae was preceded by leaks to the press that generated expectations impossible to meet.

Before that, the “Council of the media” – as Benedict XVI called it – came up with interpretations about the Second Vatican Council that are still food for discussion, because they focused on details, and they missed the general frame of the Church’s discussion.

After that, under St. John Paul II, Liberation Theology became a key issue: that theology had a strong media push, but bore huge doctrinal limits. The Church faced the issue with prudence. The Congregation for the Doctrine of the Faith published two instructions on the topic, one with a critical focus on issues, and another one that emphasized the good parts of it. This approach got lost in the “pro Liberation Theology campaign” that the secular world carried on by those who, in the end, did not want a Church for the human person, but a Church of men that addressed human issues. An ideologized Church, rather than a Church linked to Christ.

These are just some examples, and others could be provided.

There have also been totally made up stories. After the publication of Viganò’s testimony, John Waters, one of the most important commentators among Irish Catholics after his conversion, wrote a long article that strongly attacked the so-called “gay lobby”, and explained why every abuse is considered “pedophilia.”

His story on how the Irish crisis broke out explains things well. John Waters recounted that the first child-abuser priest was Brenan Smyth, who was “the perfect cover for those who wanted to hide the real nature of the issue,” and that resulted in “the vast majority of Irish people not being aware of the fact that Smyth was an aberration among abusers.”

There is a media trend to portray priests as pedophiles, although most abuses are on young people, sometimes teenagers, bur rarely children. This does not change the fact that there is a problem, but also provides a different point of view on the problem.

However, speaking only about abuse means focusing on details, with the risk of losing sight of the general framework. It is normal. Abuses generate scandal, people are rightly angry, and it is difficult to see things from a wider perspective. The same happens on issues of doctrine, that is defended or considered a useless imposition, but that touches the life of people.

This way, total distrust for the Church as an institution is developed. After the latest scandal, there is this trend – especially in the US – to say that you believe in God, but not in the Church as an institution, and that, in order to be more credible, the Pope should provide answers instead of hiding behind “no comment”. This is an almost Protestant position, and not by chance the issue of the protestantization of the Church is one of the core problems of the future, and actually even of the present Church.

If one believes in God and not in the Church as a divine institution, he is already out of a Catholic universe. The Church is something that goes beyond human shortcomings. So much so that the consecration of the Eucharist is valid even if the priest is a public sinner, and even if there is a fake priest. Because the Church goes beyond people. It is not about the priest. It is about God.

A natural objection is that the media are not compelled to accept this key of understanding, while they are expected to ask questions and write chronicles. True. But the media must also understand the institution they are writing about, since this is the only way to find real answers to questions. This does not mean to justify, but rather to understand how things are.

Archbishop Viganò‘s testimony had unfortunately the effect of creating even more confusion and furtherly polarized the discussion. The Council of the media had just a few media to rely on, and these media did not have the reach and pervasiveness of today’s media. The same was true of the campaign against Humanae Vitae. Since Benedict XVI on, the media has spread to the point that every media outlet can reach a vast audience, whether the information they disseminate is verified or real. This is the blogs’ world, with all their connotations and with followings as big as an army.

One question still remains: what is the final goal of a campaign that was always levered on unhappy people, shortcomings, vanity and on the wish of some people to have some influence in the Church?

Again, not all of those who – willingly or not – join this campaign are acting in bad faith, or are fully aware of the consequences of their actions. Certainly, their glance on truth is limited to details. In 2010, a priest wrote to The New York Times asking that people not look just at scandals, but also to everything the Church does in the world, from parishes to missions.

It is the same for Pontificates. Beyond mistakes, Pontificates must be judged through the lenses of history, rather that through responses to details. They are part of a wider temporal perspective.

Unfortunately, Benedict XVI renunciation somehow strengthened those who thought that they could simply pressure the Pope to make him go. It is not true that Benedict XVI renounced because of the Vatileaks pressures. He renounced when he thought he had set things in order. Otherwise, he could have done it before.

But now everyone thinks that Benedict XVI was the victim of who knows what kind of plots. The media pressure on Pope Francis’ pontificate, very strong since the beginning, aimed at influencing the Pope’s choices. It is yet to be assessed how successfully. Given the situation, it is likely that the attacks come from the fact that Pope Francis proved to be stronger than thought.

The attack does not, in the end, touch the Pope. It touches the Papacy. It is not just criticism of the Pope. It is an attack on the Church. This must not be forgotten.