Pope Francis, bishops at the center of reform Here is how Pope Francis’ reform of Vatican City State mirrors his Curia reform

Pope Francis, is the Curia reform only about costs? 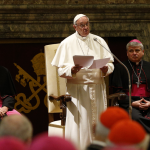 In advance of the 27th meeting of the Council of Cardinals, to take place Dec. 10 -12, Pope Francis chaired a meeting with the heads of Vatican dicasteries.

These so called “interdicasterial meetings” are periodic gatherings which deal with specific subjects. This last meeting discussed, above all, Curia expenses. This has been a heated topic since the beginning of the pontificate.

Pre-conclave meetings addressed a lot of concrete issues, including a general overview of Vatican expenses. Pope Francis had this overview in mind when his pontificate began.

The project of Curia reform is an outcome of this overview.

Curia reform is a twofold project. On the one hand, that of changing the mentality of the Curia, and to halt a certain type of careerism. On the other hand, that of creating a harmonized system to reduce costs.

Pope Francis has focused on the need for a change of mentality since the beginning of his ministry as Bishop of Rome. The Pope arrived from Buenos Aires with the idea in mind of a corrupt – or at least too self-referential – Curia, that was not open enough to listen to local Churches. Pope Francis had this idea because of his personal experiences, the information he gathered and above all from some of the speeches Cardinals had delivered in the pre-conclave meetings.

Pope Francis, then, targeted the clerical mentality. The fight against clericalism, and in particular against “State clerks”, has become a leit motiv of the Pontificate. Not by coincidence, the Pope listed the 15 Curia maladies at the first speech he delivered to the Curia, at the Christmas greeting meeting. The speech delivered the following year was instead about the remedies to the maladies.

Many of Pope Francis’ initiatives must be read through the lenses of the fight against clericalism. For example, the October 2013 letter in which he announced he was going to elevate Fr. Vergez to the rank of archbishop was rich in references to the pastoral task of the number 2 of the Vatican administration.

Even the establishment of a Third Section in the State Secretariat is born with the clear intention to provide greater pastoral care for the diplomatic staff. The same is true of the Lenten Spiritual exercises: Pope Francis wanted them to be held outside of Rome, far from the office. Bishop Marcello Semeraro, secretary of the Council of Cardinals, said that this decision is part of the reform.

In the end, Pope Francis’ reforming work is not so much about structures. But it seemed it had to pass through a change in structures.

Change of structures is instead part of the work of a change of mentality. At the same time, reforming structures addresses a pragmatic issue: the reduction of costs.

Is the Vatican financial system sustainable? This is an age-old question. The response to this question, under Pope Francis’ pontificate, led to a Vatican reform of its economy with the establishment of a Council for the Economy, a Secretariat for the Economy, a general auditor and also a commission to review the Vatican pensions fund.

Paradoxically, in order to reduce them, costs have increased. Scrutinizing of the Institute for Religious Works (IOR) accounts was already taking place when the Vatican hired the experts of Promontory Financial Group. They ended the scrutiny, but they were also paid a huge amount of money,

External consultants like McKinsey and Ernst & Young were hired to offer proposals to rationalize the communication department and to provide drafts of a Curia reform. The Commission of Reference on the Holy See economic and administrative management, known as the COSEA, was comprised of external consultants, and only some of them remained working at the Holy See to apply their skills and draw from their experience.

One of Pope Francis’ first decisions as Pope was to make Fr. Víctor Fernández, then rector of the Catholic University of Argentina, archbishop, something that was not necessary.

Recent decisions include elevating Msgr. Marco Mellino to the rank of bishop. He was recently appointed adjunct secretary to the Council of Cardinals, with the task to review the new Apostolic constitution Praedicate Evangelium.

These are the paradoxes of a reforming process Pope Francis wanted done on the move.

Since it was made on the move, the reform had steps forward and steps back. While the system should be consolidating, and while the fifth year of pontificate generates expectations for a qualitative leap, things seem to be frozen, and the same problems as ever are being discussed.

Speaking about a reduction of costs, the Nov. 26 interdicasterial meeting also addressed the need for a hiring freeze and attrition, meaning that employees that are going to retire will not be replaced. However, this decision was already made and announced by a letter delivered to all the Vatican dicasteries in February 2014.

In the meantime, while new dicasteries for Communication; for the Service to the Integral Human Development; and for Laity, Family and Life; were established, the Secretariat of State took back its central position. At the beginning, the Secretariat of State was supposed to be dismantled, or at least broken up in different sections. In this case, the reform took a step back, and it was understood that the old ways of doing business were not terribly wrong necessarily.

The same understanding came about regarding the decision not to abolish the IOR, as originally foreseen. And regarding an end to the era of outsourcing Vatican need for expertise, with renewed trust being placed in people who worked in the Vatican and knew it well, that “hidden Vatican” that was not sick with any of the maladies listed by the Pope.

And the same understanding came about when Pope Francis himself reiterated the centrality of the Congregation for the Doctrine of the Faith in handling abuse cases, while in the beginning there was even talk about establishing other tribunals to judge the bishops.

All of these issues are food for thought. The Curia reform was born with the idea of a reduction of costs and with the desire for a change of mentality. But it was also born without a definite central agenda, even if there were many agendas pushed behind Pope Francis’ back. This led to some confusion. More adjustments will be needed.

Now, waiting for the next Council of Cardinals, the question is, what will the reform be about? Will it merely confirm some of the changes already acted upon? Will it be perceived as a mere streamlining of the Curia? Or will it be able to develop a new mentality, as was Pope Francis’ priority?