Pope Francis and the altar of hypocrisy Pope Francis, towards a revolution?

Pope Francis, it is the time of the reform 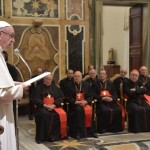 There is an interesting detail in the press release that followed the last Council of Cardinals, held in the Vatican on December 13, 14, and 15. For the first time, the text of the release does not refer to the Praedicate Evangelium, the text of the reform of the Curia, which has been the main topic of discussion since the establishment of the Council.

A signal? Possibly. In fact, for at least a couple of months, there have been rumors that the reform of the Curia will be ready by mid-December. Thus, it seems to be a clear signal that the Pope meets the group of cardinals who (in theory) should assist him in governing the universal Church, and talks with them “about the political and health situation,” the pandemic and the synodal path with the external report of Cardinal Mario Grech.

When could the text of the reform of the Curia be published? The announcement may take place precisely on December 23, in the canonical greeting speech of Pope Francis to the Curia. All the clues point to that date but without any certainty.

After the announcement of the reform, Pope Francis could provide for the appointments of new prefects and then convene the consistory expected since November, which could be announced as early as January 2, the day after the World Day of Peace.

What will the reform of the Curia be like? Many of the contents of the reform have already been anticipated by the decisions of Pope Francis: some dicasteries are already merged, others will be, while the Pope is already applying in many cases the norm that calls for people not to remain for more than ten years in a high-level Vatican post, before returning to the diocese.

When the Pope wants to start changing things, he generally adopts the method of commissions and commissioners.

In the beginning, there were commissions for economic and administrative activities of the Holy See (COSEA) and that for the Institute for the Works of Religion (CRIOR), with the goal of starting a reform of the Vatican finances.

This reform of the Vatican finances went on by trial and error, and above all, it created a climate of division that is still present today. Pope Francis endorsed decisions, then backtracked, then resumed old arrangements, in a continuous back and forth that created uncertainty. Those who now hold the reins of Vatican finances are acting outside the reforms, while an ongoing process in the Vatican, rather than cleaning up, seems to give rise to new questions.

However, this year, Pope Francis wanted to signal that there would be changes in the Congregations.

Thus, before appointing the new prefects (sometimes just two days earlier), the Pope had appointed an apostolic visitor for the Congregation for Divine Worship, the Congregation for the Clergy, and later even a group to control the work of the Dicastery for Promoting Integral Human Development, whose prefect, Cardinal Peter Turkson, seems ready to step down by December, 31.

The dicastery for the Integral Human Development found itself amid a small earthquake when the assistant secretary, Monsignor Zampini, suddenly left, and the other secretary, Father Bruno Duffé, left one year before the end of his term. It is said that now the Pope also wants the resignations of all the leaders of the dicastery, but these are only rumors. They reveal, however, how the situation is considered critical.

Pope Francis also appointed an administrative delegate to the Congregation for the Evangelization of People, Benjamin Estevez Dominges.

Pope Francis has also begun to commission the Chapters of the Basilicas: the Fabbrica di San Pietro had an extraordinary commissioner, while the reform of the Statute of the Chapter was being carried out; there was also a visit to the Vicariate of St. John Lateran, and now an extraordinary commissioner has been announced for the Chapter of Santa Maria Maggiore (Monsignor Rolandas Makrickas, whom Pope Francis had called to Rome to replace Monsignor Alberto Perlasca in the administration of the Secretariat of State, an office now empty of content).

The purpose of the commissioners is not precisely understood, and this is probably what Pope Francis wants. His goal is to break what he considers (rightly or wrongly) power networks. Pope Francis does not even feel the need to ponder the steps because the reforms are taking place on the go.

It is unclear whether these moves will contribute to a change of mentality. Instead, they will increase bitterness within the Vatican. Above all, it is to be seen whether these reforms will somehow question the institution of the Holy See. Pope Francis is not reforming, starting from a specific basis. Faithful to his motto that one must not stop in front of the “it has always been done this way,” he does not hold much in high regard, not even the tradition of the Holy See and its structures.

Tradition, however, is a language. It is a piece of history that cannot be eradicated. Not even Paul VI broke completely with the past. He kept the symbols, improved them, was very careful not to destroy while building. He knew that some vocabulary and traditions could not be touched, not because they were traditional but because they made sense.

The whole debate on the reform, on the other hand, since the pre-conclave meetings, has been handled with a pragmatic perspective.

Some of the reforms rumored, such as the Dicastery of Charity which will replace (and will elevate) the Pontifical Almsgiver, do not fully recognize the importance of the Pope having charity under him, in his family, outside the bureaucracy of the Curia.

These are only details, but they will reveal a lot about the Church’s direction, considering that Pope Francis has repeatedly underscored, also recently, the need for leaders to start processes and then step aside to allow the processes to grow.

It does not seem credible that, by saying this, the Pope is thinking of his resignation. Looking at the moves and the amount of legislation carried out, also outside of any consultation with the dicasteries, it seems that the Pope wants to be the one who influences the processes even when he stops short of controlling them. For this reason, the reform of the Curia is particularly awaited, as it will finally reveal another trait of his modus operandi.

3 Responses to Pope Francis, it is the time of the reform