Pope Francis, how will he defend a Church under attack? A Pope, Nobel Laureate in Literature? 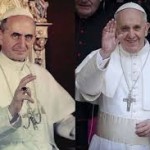 Paul VI will be beatified Oct. 19 at the end of the extraordinary synod on the family, being the synod a body the late Pope wanted and promoted. A Paul VI that is to be proclaimed saint, probably as soon as 2015, through an accelerated process pursuant to Pope Francis’ wishes. Pope Montini is indeed Pope Francis’ model, as he explained in a recent interview, praising Paul VI for the promulgation of “Humanae Vitae” notwithstanding the opposing views about its content held by a majority of public opinion. Ultimately, much of the issues of this pontificate are the same of Paul VI’s pontificate.

Pope Francis lacks Montini’s Curia experience, and perhaps also his international vision. Raised in the Vatican Secretariat of State, then appointed archbishop of Milan, Giovan Battista Montini practically had already become Pope as he joined the 1963 conclave that elected him as John XXIII’s successor. After his election, there was a lot of speculation about his intentions regarding the continuation of the Second Vatican Council. Paul VI reaction was to address to the Council a programmatic speech, mirroring what he had said at the beginning of the Council. Id est, that a unified vision of the Church was needed and should be upheld by the Council, and that the primacy of Peter could not be set aside. Paul VI did so tactfully, sending to the experts of the Councils, in addition, several proposals to amend some of the documents of the Council in order to underscore the importance of the central Church, and at the same time designing a radical Curia reform, which led to the issuance of the Apostolic Constitution “Regimi Ecclesiae Universae”.

Three pontificates after Paul VI’s, Pope Francis is now facing more or less the same challenges. He does not have to carry forward a Council, but he stands in a post-Council period widely debated. Pope Francis wants to make clear his commitment to the peripheries of the world, and he wants to underscore that laymen are full participants in the management of the Church. Hence, his visits to the parishes; his stress on the role of laymen in his speech to the Council for Economics; and the appointment of his friend and layman Guzman Carriquiry as “Vice-President” Secretary of the Pontifical Commission for Latin-American, a job usually assigned to a bishop.

Paul VI was also a great promoter of the role of laymen in the Church and paid a lot of attention to the peripheries, being the first Pope to celebrate mass on Christmas eve outside the Vatican (in Italsider, an industrial plant in Taranto, Italy). Paul VI was also the first Pope to address the United Nations General Assembly, advocating a moral, rather than a functional, reform of international politics.

A moral reform, more than a functional one, is something that Paul VI wanted for the Church as well. He contributed the Year of Faith and the Credo of the People of God to the Council’s and post-Council’s discussions, in order to reiterate the doctrinal truths. Faced with the ambiguities emanating from the practice of collegiality, Paul VI promulgated “Humane Vitae”, an encyclical which run counter to the views of the majority of theologians that were asked about it.

Collegiality can turn against the Church, if it is not exercised within defined boundaries. This is at the heart of the debate nowadays, with the Curia reform believed to be taking off at the beginning of 2015.

Pope Francis spoke about more synodality, and this is the reason why he gave a more important role to the General Secretary of the Synod, chaired by Cardinal Lorenzo Baldisseri. In Pope Francis’ view, the General Secretariat of the Synod should be a linking and coordinating body, serving as a sort of “Ministry for Relations with Bishops”. This was underscored by the fact that Pope Francis asked Baldisseri, and not the Secretary of State, as had been customary, to coordinate his meetings with the heads of dicasteries of the Roman Curia.

The synod cannot, in any case, be a governing body. Collegiality is always “sub Petro” (under Peter) and even the dignity of bishops as peers is defined by their having a common leader. Cardinal Gehrard Ludwig Mueller, Prefect of the Congregation for the Doctrine of the Faith, explained this at the presentation of a book curated by the former general secretary of the Synod of Bishops, Nikola Eterovic, which includes all of Benedict XVI’s remarks to the synodal assemblies. Mueller’s comments were clearly a reference to the current debate.

Paul VI wanted the synod as an expression of collegiality. But he wanted it to be a consultative, not deliberative, body in order to uphold central coordination and avoid confusions – including doctrinal ones. This way, he did not undermined the responsibilities of the local Churches, while at the same time not doing away with a central body.

Paul VI’s was also combatting pressures to have an agenda for the Church set outside the Church itself. An attempt to set an outsiders’ agenda that exploited openings and the enthusiasm surrounding the Council, to undermine the Church’s authority. It was the now famous “Council of the media” that overshadowed the “real Council,” as Benedict XVI recounted in his last meeting with the Roman clergy.

It was precisely to prevent this that a new managing of Church communications was introduced. “Paul VI pushed out the journalists from the Vatican,” the dean of vaticanisti Benny Lai used to say about Paul VI’s decision to move the Holy See press office outside of the Vatican Walls. The long process of considering new ways to manage Vatican communications began then.

This is the reason why the information of discussions at synods is managed differently, and is always evolving towards even more transparency. During the synods of bishops, the summary of the interventions (prepared by the synodal fathers) are delivered to journalists right after the congregations, in 5 different languages, and are also published in the Vatican web-site.  Same-day briefings in different languages are also provided.

Combatting the possibility of a “Church of the media” has been a constant effort since the reform of the Holy See Press Office, which is under the authority of the Secretariat of State since 1986.

Nowadays, communications have become a major concern of the Holy See. The new Pope had been chosen on the basis of his skills to communicate the Gospel.

There is a lot of speculation about a new Vatican office for communications, in order to enhance transparency and the quality of the information being delivered. All offices dealing with communications could come under a “Secretariat for Communications” single umbrella.

There is another interesting rumor about Vatican communications: Pope Francis could establish a Congregation for Culture, embodying the pontifical councils for Social Communications, Promoting New Evangelization, and Culture. Vatican communications would be the responsibility of a new, separate department, under a revamped Secretariat of State (perhaps State’s current two branches will become two different secretariats).

This department could include, institutionally, “La Civiltà Cattolica,” the Italian Jesuit-run magazine which articles are submitted for clearance to the Secretariat of State before they are published.

Hence, the insistent rumors that Father Antonio Spadaro, editor of La Civiltà Cattolica, the first person to interview the Pope, will be the director of the Holy See Press Office. Father Spadaro is taking on an increasingly institutional role leading this journal which has, it seems, become the main conduit to interpret the Pope’s thinking. The series of articles on the Jesuit Peter Faber, recently proclaimed saint; the hiring of Juan Carlos Scannone, theologian and a teacher of Bergoglio, with the task of better explaining the “theology of the people”, the Argentinean branch of the Theology of Liberation; the goal of making this Italian journal always more international: everything points to thinking of “La Civiltà Cattolica” as ultimately becoming an official publication offering Pope Francis’ thought in depth.

A test for Vatican information will be the next synod for bishops. At the moment, the discussion on the synod is still biased by what has been leaked to the media. Statements are often instrumentalized. Prove of it is the speech Cardinal Walter Kasper gave at the consistory on the family. It was intended to be kept as an internal document, but it was leaked to an Italian newspaper and then included in a book which is going to be a best-seller. Why was the speech not made public immediately, thus avoiding this ‘confusion effect’? Are the Second Vatican Council times back?

Pope Francis dream to be a new Paul VI can become the nightmare of having to deal with the same issues that Paul VI did. When Montini addressed the Curia reform, internal resistances pushed him him into isolation. Benny Lai recounted the criticism circulating that Montini’s Papacy “lacked a central government.”

The criticism emanated from a strong internal debate, which has been reprised – yet with different tunes – under this pontificate. The General Congregations that drove to the election of Pope Francis spoke about the Curia functionality, not about big issues. This is the original sin of this pontificate.

When Paul VI went to the United Nations, in the aura of John XXIII’s Pacem in Terris, he highlighted the need for a reform of the United Nations not based on its functions, but from a strong anthropological point of view (and all the Popes has since followed this view).

Paul VI applied this principle to the reform of the Curia. Nowadays, the discussion is mostly about the efficiency of Curia, rather than on the global mission of the Vatican institutions. Pope Francis is now seeking a balance. He has established a parallel Curia: the new bodies are still not identified in the revamped Vatican web site, but they are preparing their statutes and defining their responsibilities. Now, he will delve into communications, which he has been very interested in. At the same time, Pope Francis probably understands now that there is a need of a vision for a more comprehensive reform. A reform of attitudes, in Pope Francis’ words. The challenge of this Papacy is how to carry this reform on, beyond media agendas. Striking the right balance means the difference between living Paul VI’s dream or experiencing his nightmare.