Pope Francis, and the narrative about the Second Vatican Council Pope Francis, the problem of responding to abuses 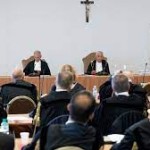 The third hearing of the Vatican process on the management of the funds of the Secretariat of State did not lack twists. The Vatican Promoter of Justice (i.e., the prosecutor) proposed that all the requests for a action and information be returned to him so that he could redo the investigations in a clearer picture, thus responding to complaints about how the Promoter of Justice and gendarmes have built the path that led to the subpoena of ten people, including Cardinal Angelo Becciu.

The lawyers, for their part, seeing the irregularities and highlighting them one by one, have instead asked for the trial to be declared null and void, precisely because of those procedural defects that in some cases have turned into something even more challenging to sustain for the accused.

The president of the Vatican Tribunal, Giuseppe Pignatone, has opted for a middle ground. The process continues, but in some particular circumstances in which anomalies and irregularities have been highlighted, the investigations must start all over again, and the interrogations must therefore be redone.

Not only. Pignatone also asked for clarity on the standing of Monsignor Alberto Perlasca, who was for 12 years director of the Administrative Office of the Secretariat of State. Is he under investigation, or is he just a witness? A legitimate request, considering that Perlasca’s testimony is the pivot of the accusation. The promoter of Justice, by the way, had refused to deposit the full audiovisual recording of the testimony of Monsignor Perlasca, despite a specific court order.

Perlasca’s testimony recording, as well as other recorded conversations and documentation, must be turned over by November 3rd. This is also an order of the Court.

Pignatone seems to have wanted to send out a signal with his decisions: the investigations have not been done well, and the accusatory system is weak. In some cases, he has returned not all the charges, but only some, to the Promoter of Justice. They are those in which the interrogations were done summarily, the procedures most irregular, and the procedural guarantees least considered.

Cardinal Becciu will have to be re-questioned about his alleged support to Caritas in his diocese in Sardinia and for a cooperative for the assistance of immigrants, and for the accusation of having put pressure on Monsignor Perlasca to change his testimony. Also, some allegations of fraud and embezzlement against Enrico Crasso, who managed the funds of the Secretariat of State, must be re-investigated.

In short, the accusatory narrative conceived during the investigation was somehow demolished. The investigations of the Vatican police and their way of conducting them were questioned, as was the theses of the Promoter of Justice. Not only were these considered irregular, but they were also considered to be influenced by prejudice, the result of an intentional construct to prove a thesis.

It is a scenario that suggests that the proposal of the Promoter of Justice to get the documents back and thus restart the investigation was due precisely to his awareness of these irregularities and to his desire to “fix” the mistakes he had made in some way.

What will the position now be? The trial, and many of the unusual procedures of the trial itself, is held summarily (that is, requested directly by the Pope) and thanks to four papal rescripts that abolished office secrecy and authorized the use of wiretapping and other investigative tools. The line of the Promoter of Justice will probably be that he acted as he did to comply with the Pope’s requests to move quickly and turn the page, but underlining that it is only a procedural error, as the promoter of Justice also tried to explain during the last hearing.

However, all the basic questions remain. Can the order of the Court remedy the structural deficiencies of the Vatican judicial system? These include the absence of the rule of law; the obsolete codes not in line with human rights; the possibility for a Pope-king to intervene in a process while it is being held; and the absence of a monitoring body and supervision of the work of the Vatican magistrates.

And again: can the order repair the damage suffered by the suspects and the accused? The Associated Press consulted Saccucci, the lawyer who brought the Italian State before the UN Committee for Human Rights, who highlighted aspects “regarding the problem of defense rights according to international standards” and that this could even invalidate the process.

In short, Pignatone cannot solve structural problems with an order that had to be resolved prior. These problems have always been somehow masked by the common sense with which things were handled before.

The whole process thus risks becoming a great debacle for the Holy See. After two years of summary trials, with people’s lives destroyed, the Promoter of Justice has nevertheless not given up on his accusations, nor has he backed down.

Crux noted how, when reading the cards, it is difficult to understand how professionals of the caliber of René Bruelhart and Tommaso Di Ruzza, president and director of the Financial Intelligence Authority, were involved in the process. It should be noted that it all started, incredibly, on the eve of the MONEYVAL Council of Europe Committee meeting, which was going to evaluate the work of the Vatican Tribunal. The AIF had repeatedly pointed out the Court’s deficits.

But if the Promoter of Justice does not give up his thesis, certainly the claims for damages by those accused will not be set aside. And so, the Holy See could be suffering insult to injury: questioned due to the activism of the lawyers, while the Court tries to heal the errors committed, and in a difficult financial situation, the Holy See could also be forced to pay for his mistakes. In short, the consequences are all to be determined. And the Pope’s approach to justice, his desire for transparency at all costs, could prove to be a boomerang.

One Response to Pope Francis, London Real Estate trial can become a boomerang