Pope Francis, looking back to the Second Vatican Council 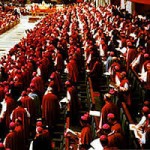 There is a Council in the Pope’s mind. Not the Third Vatican Council, wished by many, especially within progressive circles. Rather, it is the Second Vatican Council, as it seems that Pope Francis is pursuing the spirit of the Council. The same spirit that 50 years ago had put the Church in a path of enthusiasm and renewal. A spirit which got lost in the long post-Council debate pitting those who maintained the Council was a rupture against those who underscored it represented continuity within the tradition.

The real problem is the Council, traditionalists used to say, seeing in the post-Council drifts the beginning of the ruin of the Church – withina scale that goes from the ultra-traditionalist Lefebvrists, to moderate seekers of truth. The real problem is the Council, the progressive wing used to say: they had conceived the era of the Council as a time of change, without understanding that the Church’s tradition, the Truth it proposes, is a fixed point that no Council can in the end even touch.

This is the reason why Pope Francis – the first Pope in 50 years who had not taken part in the Council, he just lived through it as a young priest in Argentina – seems to be seeking to place everything under that spirit, hoping to give rise to a discussion that will lead the Church to announce the Gospel in the existential peripheries, with enthusiasm and simplicity, and without too much moralism.

The Pope’s decision seems evident by scrolling down the list of the 26 participants appointed by him to the upcoming synod of bishops. Among them, Cardinal Godfred Daneels, over 80 years old, one of the main characters of the Council, in its most progressive wing; and Cardinal Walter Kasper, who has already outlined some of his views during the consistory convoked by Pope Francis last February, that discussed the family. But the list also includes people with different viewpoints. Like Cardinal Carlo Caffarra from Bologna, who has already presented opinions strongly contrary to Cardinal Kasper’s theses. And like Cardinal Fernando Sebastian Aguilar, whom Pope Francis wanted to recognize with an honorary red biretta (he has turned 80, thus he cannot participate in a conclave), but who is not part of the progressive wing. The list of Papal participants to the synod alternates old prelates and younger people the Pope likes. All of them are called to take part in a wide-open discussion, in a synod where – we can be sure of – a real doctrinal fight will take place.

This battle’s premises lead us to conclude that it will track the Second Vatican Council’s battle. In his last meeting with the Roman clergy, Benedict XVI spoke about a Council of the media and a real Council. Id est, about the Council as the media conceived it, according to a well-defined agenda, and about what really happened during the Council’s talks.

The contents of high-level meetings have been shared with ever more transparency in recent times, in order to avoid a Council-of-the-media effect. This is the reason why the synod of bishops had put together an impeccable structure for communications. Bishops’ statements,prepared in advance, were released at the end of the day and translated into five languages. Naturally, the synodal discussion was kept private, to favor spontaneity and open discussion. However, its atmospherics were described in four different languages to journalists.

Pope Francis’ decision to set a more informal tone for the synod recalls the times of the Council, with its well prepared discussions,but its contents not publicly released; and to the attempts by some Conciliar father to influence the likelihood of having one or another thesis prevail, by leaking documents to journalists.

The Council of the media was born this way. Today, we risk having a synod of the media and a real synod. On the “real side,” prelates have already started working to advocate for their positions. A book, “Remaining in truth”, decidedly opposes the way Kasper set the stage for the discussion of family during the consistory, especially the preferential option for mercy which would bring about a greater likelihood ofallowing divorcees who have remarried to access Communion.

The book contains essays by five cardinals, and it is noteworthy that one of them is Cardinal Gerhard Ludwig Mueller, Prefect of the Congregation for the Doctrine of the Faith. Mueller has also addressed at length the issue of the family in an interview-book.

This is evidence that the synodal fight has already begun, and its outcome is not predictable.

The Synod of bishops will offer the first real testing ground to Pope Francis. Does the Pope aims at a real change? Or is he just trying to recall the spirit of the Council with the hope of uncovering again the prophecy that renewed the Church?

In fact, prophecy comes to light when its contents are clear, and there is structured thinking. The Second Vatican Council was the fruit of a theological ferment that had been flourishing for decades. The experience of worker priests had already taken place in France and Belgium. Everywhere, Catholics looked for a space in society, even through commitments in politics, encouraged by the Social Teaching of the Church. The former lands of mission (like the United States) had turned into well-established Catholic outposts, thus bringing to attention new issues.

Yet, a succession of popes was necessary before reaching the Council. Pius X fought Modernism, defending the Doctrine; Benedict XV propelled the Church’s missionary activity towards diplomatic activity; Pius XI had to deal with totalitarianism and defended the “piece of land” of the sovereign Vatican City State in order to help the mission; Pius XII laid the groundwork for the advent of John XXIII. And John XXIII finally tore down the wall, and convoked a Council. Then, Paul VI had to put things in order, supporting with intellectual finesse the post-Conciliar Church, moderating the opposing factions.

Paul VI halted the post-Conciliar drift by drafting a Nota Explicativa Praevia (an explicative Note) to the Council’s Dogmatic Constitution Lumen Gentium; by writing and proclaiming the Credo for the Year of Faith; and issuing the encyclical Humanae Vitae without subscribing to the conclusions that his advisors had presented to him. Paul VI thus established that the collegiality of bishops could go far, but not beyond doctrine. The disappointment of the many who had different expectations about what the encyclical would say led to one of the most difficult time periods of Paul VI’s pontificate.

What about Pope Francis? Speaking in an interview, Pope Francis defined Paul VI a hero for what he did in Humanae Vitae. It is yet to be seen if he will be as courageous as his role model. If – after two synods, the one in 2015 expected to include some decisions – the Pope’sdecisions will align with the media expectations, or if he will stand firm on doctrine.

Many are worried that their expectations will go unmet. Like the Jesuit Thomas Reese, who bitterly commented on the National Catholic Reporter that the papal picks for the synod were “disappointing,” and underscored that the Pope has pushed lay people aside and has appointed 25 representatives from the Curia, despite the fact that Curia officers should serve as the audience for an extraordinary synod and not as policy makers.

Reese’s analysis also concludes that Pope Francis’ picks are a blow to Curia reform. If in the synod the importance of the role of the laityis not recognized, and it is only the role of clerics that is appreciated instead –Reese’s reasoning goes– why should not the same thing happen in the reform of the Curia?

This reasoning must be laid on the table today, while the Council of Cardinals is having its fifth meeting.

The reform of Pastor Bonus – the Apostolic Constitution that regulates the functions of the Curia office – is still far away. There are many ideas being discussed, but until now the Council has just conceived an economic reform, and there are many bodies still without statutes.

Pope Francis has open a discussion over institutionalization as well. In order to overcome the Church’s evils, the Church itself must be put in a state of Permanent Council. Every structure, every office may be critically analyzed. To the point where the yet-to-be established Delicta Graviora office in the Congregation for the Doctrine of the Faith (an office that will deal with the most-serious crimes in the Church) maybe placed in Buenos Aires, rather than in the Roman Curia.

It remains tobe seen if this narrative – sometimes improvised, since Pope Francis wants it to be spontaneous – will turn into an institutional effort really capable of renewing the Church. Otherwise, Pope Francis could see the prophetic choices he has opted for since the beginning of his pontificate frustrated by the fact that they have not been institutionalized. The risk being that, after Pope Francis, everything will have to start again from zero.

6 Responses to Pope Francis, looking back to the Second Vatican Council