Fratelli tutti: likes and dislikes of the encyclical of Pope Francis Pope Francis, four issues on the table for the future of the Church

Pope Francis, looking beyond the scandals 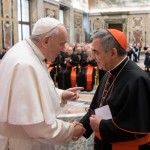 Cardinal Becciu’s resignation as prefect of the Congregation for the Cause of Saints and from the prerogatives of a cardinal opened a Pandora’s box. Since the resignation, the media has reported every day about the Holy See’s mismanagement in finances, published interviews of people who had worked as financial intermediaries for the Holy See, and hinted or made explicit allegations against Cardinal Becciu’s himself.

It is striking how many documents are disseminated in the media, despite there being an ongoing investigation that should be confidential. If, on the contrary, no investigation has been formally initiated yet, it is striking that Cardinal Becciu had to leave his positions without being found guilty of anything.

He is not the only one in this situation. In October 2019, five Holy See officials were suspended from their jobs due to an investigation that led to search and seizures in the Vatican Secretariat of State and the Vatican Financial Intelligence Authority. Later on, another prelate was suspended from his position. Some months later, while the investigations were still ongoing, and being unclear whether these people would undergo a trial or not, all of them lost their jobs and were let go in different ways.

However, focusing on the scandal prevents us from taking a broader look at the full picture. The whole picture matters. Not that the scandals are a good thing: they never are, and even less so for the Churchmen. However, the Gospel principle that wheat and weeds have to grow together is always valid. It is human. It has always been that way.

Setting the gaze at the broader scenario brings more questions than answers.

First question: why did Cardinal Becciu have to resign, and why now? If there was any illicit behavior, it could only had taken place when Cardinal Becciu was the deputy at the Vatican Secretariat of State. As a deputy (sostituto), he could use some funds at his discretion, and so he could do with them whatever he wanted.

So, while Cardinal Becciu is compelled to resign without any due process, many financial operations need to be scrutinized nevertheless. So, in the end, there is a need for a thorough investigation and a trial.

Second question: Cardinal Becciu was involved in the Secretariat of State decision to invest in a luxury real estate property in Sloane Avenue, in London. Archbishop Edgar Pena Parra, Becciu’s successor as deputy of the Secretariat of State, re-structured the investment. Why? Because the investment was not going to be as profitable as expected. One of the weaknesses of the operation was the many commissions to intermediaries.

So, the Holy See decided to cut out the intermediaries, thus saving money and directly managing the investment. It means that any alleged mistake from the previous administration was going to be repaired. So, why did investigations focused on those investments?

There have likely been other cases like the Sloane Avenue case. The Holy See has always worked to fix things without breaking others. In short, it means that no scandal was treated publicly, nor was there a loud administration of justice. Mostly, the Vatican tried to fix mistakes and remove from management those who failed in their responsibilities, but without major outcries.

Back to the Sloane Avenue scandal, we might assume that the investigation was not an attack levied against Becciu, but the new “sostituto.” The search and seizures at the AIF actually even blocked any inquiry the AIF was working on.

The situation leads to another question: Has not the new (still ongoing) investigation halted a cleaning up already taking place discreetly?

Hence, another question: why?

The broader scenario shows that the Holy See is once more under attack. It is not just about her moral authority. We face a series of small cases of judicial news, and the Holy See is merely going with the flow. To the point that the Italian journalist Giuliano Ferrara warned that the Vatican “cannot be managed as if it were an Italian prosecutor office.”

The second narrative trend is that of a plot against Pope Francis’ reform. The conspiracy might explain the stops & go in reforms. However, the anti-Pope conspiracy cannot stand the facts. Although Fr. Antonio Spadaro tried to clarify that Pope Francis is not working specifically for a reform of structures, Pope Francis changed the structures. However, if anyone notes this, he/she is depicted as “part of the opposition” to Pope Francis. As if the Church had never witnessed lively internal discussions about how to carry out reforms. As if it never happened that a Pope was criticized.

However, speaking about the Pope’s enemies shields the pontificate from any criticism. For example, papers on the trials are leaked to newspapers. When the people under scrutiny are perceived in line with Pope Francis, it is the Pope’s enemies who attacked them. When they are perceived as not in line with Pope Francis, the judges are said to be doing a great job.

Pope Francis has to solve this problem. He needs to refocus the discussion, making an appeal to go beyond the petty scandals and look at the broader picture. This way, the Pope will overcome the current narrative, which is part of a very sophisticated attack against the Holy See.