Pope Francis, towards a revolution? 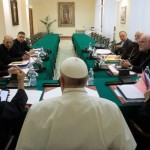 There were no surprise announcements in Pope Francis’ Christmas greetings speech to the Curia. No mention of the reform of the Curia. No mention of what was done. However, on the same day, Pope Francis formally dismissed Cardinal Peter Turkson from his role as Prefect of the Dicastery for Promoting Integral Human Development, together with his collaborators. In his place, an interim board made up of Cardinal Michael Czerny, who is already undersecretary of the Migrants and Refugees Section, and of Sister Alessandra Smerilli, who has recently become secretary of the dicastery.

How Cardinal Turkson’s time in the Curia ended deserves reflection. It is not that the Cardinal has to leave his office after 12 years in the Curia. Instead, it is how this renunciation has come about that is striking.

For some time, two cardinals were together in the Dicastery for Promoting Integral Human Development: Cardinal Peter Turkson, Prefect, and Cardinal Michael Czerny, who had entered the dicastery in the wake of Turkson and who later earned the Pope’s trust and who was first the head of an ad hoc section, that of Migrants and Refugees, and then was made cardinal.

It was a sign. The former collaborator became a cardinal, and therefore the balance of power was reversing. Pope Francis is not new to such initiatives. For example, the Pope created cardinal Gualtiero Bassetti, archbishop of Perugia, when he was still vice-president of the CEI. It was a clear signal of whom he wanted to take the place of Cardinal Bagnasco as president. The idea is that, with that kind of pressure, sooner or later, people give up. Cardinal Turkson continued his work, as did Bagnasco. Both have always thought that the Pope should have asked them explicitly to leave, if that is what the Pope wanted. It did not happen, also because the Pope knew that this would provoke reactions.

As Cardinal Turskon’s retirement date drew near, Pope Francis established a commission to inspect the dicastery. Cardinal Blaise Cupich, archbishop of Chicago, led the commission, assisted by Sister Helen Alford, vice-rector of the Pontifical Angelicum University, and Pier Francesco Pinelli, an engineer turned manager and who was involved in the study and establishment of the Dicastery for Promoting Integral Human Development.

It was the third inspection that Pope Francis ordered in the dicasteries, but the first with a real team. The inspection conclusions are not known, and nothing can formally be traced back to that inspection. Nevertheless, the presence of three inspectors created a precedent that would have aroused less suspicion when there would have been the inevitable revolving doors, and some of the protagonists of the scene would leave.

Thus, shortly after the inspection, but with an action that is said to have been planned ahead, Father Augusto Zampini resigned. He had been appointed assistant secretary of the dicastery with a communication that arrived, in an unusual way, at 8 in the evening, as an extension of the formal midday bulletin where all the appointments are included. A way of saying that that decision could not be postponed to the next day, it had to happen on that day.

The fall of Zampini followed the exit of the other secretary, Father Bruno Maria Duffé. He left on the threshold of turning 70 years old, one year before the end of his mandate, apparently due to internal disagreements.

In the meantime, Sister Alessandra Smerilli had arrived as undersecretary. When the two secretaries left the scene, Sister Smerilli became secretary. She has now taken over the management of the interim dicastery, together with Cardinal Michael Czerny.

And the Cardinal, in a statement released by the Migrants and Refugees section, said that the dicastery faces “numerous and pressing challenges” in our world, “which prioritizes the globalization of indifference over solidarity while trampling on our common home and universality of the human family. ”

The Cardinal added that “the good work carried out in the Migrants and Refugees Section of the Dicastery offers itself today as a fruitful approach to the challenges just mentioned.”

These are words that give the idea of a sort of planned coup d’état: first, an ad hoc section placed directly under the direction of the Pope, and then the replacement of the Prefect, so that the whole dicastery would take that line.

Will it be like this? Indeed, Pope Francis has accustomed us to different situations of this kind, where new characters are placed as a model, join the old ones, and then replace them.

One wonders, therefore, what will be the fate of the theologian Armando Matteo, called by the Pope to be undersecretary of the Congregation for the Doctrine of the Faith and sponsored by the Pope at the end of the greeting speech to the Curia. Or what position is the theologian Luigi Maria Epicoco destined for, whose books have already been donated to the Curia twice and to whom Pope Francis has given the position of ecclesial assistant to the Dicastery for Communication and “columnist” of L’Osservatore Romano  (a title that, after all, it was never conferred by the Pope, and certainly not in a bulletin of the Holy See Press Office)?

We are at a time of a handover that will be fast, brutal, and sudden. Pope Francis appears to have decided not to give time to react to those he considers his adversaries – the people who allegedly plotted his succession while he was in the hospital. Thus, all the appointments will come together, one after the other.

The speech to the Curia did not have these hints but had a constant call to humility, as had already happened in 2019. The fact that there were no specific themes gave the idea of a twilight speech, as if the Pope, and as a result, the pontificate, no longer had anything new to say.

But the Pope also dwelt on some passages. He remarked on his attacks on clericalism and spiritual worldliness, and was probably thinking himself about the attacks he feels he is under.

Now is the time of the revolution. It will not go through the reform of the Curia. The usual rumors say that the Council of Cardinals has not spoken out because it was decided it will continue to amend the Pastor Bonus, without a new text. Therefore, the Pope would feel freer to act. Other rumors say that the Pope wants to introduce new items and even take the interim leadership of the Congregation for the Doctrine of the Faith.

While waiting for the transfer of Archbishop Morandi, number two of the former Holy Office, to the diocese, and the retirement of the number 1, Cardinal Ladaria; while five other congregations of the Curia await new heads; the Pope could also decide further changes, and to do them quickly, by convening as early as January 2 of this year a Consistory for February. It will not be a short list of cardinals, about ten, that will conclude the generational transition.

This Christmas, for Pope Francis, is a moment of transition. But it remains to be seen whether the people around him will be able to put his plan into action.

3 Responses to Pope Francis, towards a revolution?