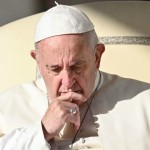 There is one striking figure in the 2017 Church Stats presented to the Pope on March 6: for the first time since 2010, the number of priests decreases, while bishops and deacons are more.

This clue must not be underestimated. It means there are no vocations.

This figure is shocking, since Pope Francis has always advocated for a missionary push. Pope Francis is also aware of the demographic crisis, and he has often spoken about that. The figure is also striking because of Pope Francis’ huge popularity.

Pope Francis’ popularity, in the end, did not bring new vocations, although the world is indeed in great need of vocations.

Catholics are living difficult times, now more than ever. Persecution of Christians is now carried on in subtle ways. Or, in the end, through indifference and within indifference.

One example might help. France is one of the places where Christians are most persecuted. Fr. Jacques Hamel martyrdom in 2016 came at the end of a wave of anti-Christian attacks, and just a few reported about it. Fr. Hamel was a martyr of indifference.

France is living today another horrible moment. Since 2015, the Observatory on Christianophobia has been collecting month by month records of all the violent attacks against places of worship in France.

The latest report stresses that “there have never been so many anti-Christian action in France as in Feb. 2019”. Here are the figures: 22 churches vandalized, 11 churches profanation, 21 robberies, 3 criminal fires, 3 acts of vandalism against Christian symbols, a Christian school devastated, 2 robbery in places annexed to churches and 3 vandalized cemeteries.

Cardinal Philippe Barbarin case fit into this climate. The archbishop of Lyon was sentenced for covering up abuse on minors by Fr. Bernard Preynat in the 1970s and 1980s. Cardinal Barbarin appealed, but also announced he is going to render his resignation to Pope Francis. The meeting will likely take place March 18.

Four years ago, Fr. Alexandre Hezez spoke out about Preynat’s wrongdoings. The stories dated back to many years before – Hezez is now 40. The target of the stories was Cardinal Barbarin, considered guilty because he did not report the abuse though he knew what had happened. Cardinal Barbarin is archbishop of Lyon since 2002.

As always (and the Australian case of bishops charged with crimes is one of the specimen for this trial), other victims come out, and sue Barbarin.

An investigation is started. In 2016, the prosecutor rules Barbarin is innocent, as the Cardinal never opposed justice. In addition to that, it states that, even if the Cardinal knew something before 2014, now everything has prescribed.

The French juridical allowed for Cardinal Barbarin to be tried.

During the trial, testimonies showed that he knew of the abuse and did nothing. Cardinal Barbarin stayed silent until Hezez said that the Cardinal never suggested him to sue Preynat. Then, he stood up and said: “It is not true. I perfectly remember I did that. I told him to find other survivors that could move allegations still not prescribed, and I assured my support. I never tried to hide, nor to cover up, these horrible facts.”

This move of pride did not prevent the guilty sentence. Even some of the French clergy distanced from Cardinal Barbarin, as if the Cardinal is a needed scapegoat to give back credibility to the Church.

As it was Cardinal Pell, found guilty in Australia and sentenced to six years imprisonment in a trial that many considered at least flawed. Cardinal Pell was even brought to jail, though it is only a first grade sentence. A large part of the Australian Church stayed almost silent.

These cases show the big challenges the Church is facing now.