Pope Francis, an iron hand against priestly pedophilia. How will the international community react? The synod’s risk: mismanaged expectations 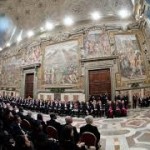 Phase two of Pope Francis’ diplomacy began with his advocacy of an intervention in Iraq. Anticipated by Archbishop Silvano Maria Tomasi, Holy See Permanent Observer at the UN Office in Geneva, Pope Francis launched the request in his flight back from South Korea. It was reiterated by the Secretary of State Pietro Parolin, who spent a week in New York speaking at the World Summit on Climate, the United Nations Security Council and the General Assembly of the United Nations. On this last occasion, Parolin stressed that there is a «legitimate and proportional» use of force, to put into action at an international level (i.e. not to be assigned to any single state) to confront the «new phenomenon» of global terrorism. The speech of the Secretary of State signals the passage to phase 2 of Pope Francis’ pontifical diplomacy. Not by chance, the request for an intervention was reiterated at a recent meeting in the Vatican among the nuncios of the Middle East area, the officials of State Secretariat and the chief of Vatican dicasteries whose work insists in the Middle East area.

A release delivered at the end of the meeting reads that «the participants reaffirmed that it is licit to stop the unjust aggressor, always in accordance with international law. Nevertheless, the resolution of the problem cannot be entrusted solely to a military response; the problem must be dealt with
more radically by addressing the root causes which are exploited by fundamentalist ideology.»

In his speech to the General Assembly of the United Nations, for the first time since he has taken over the post, the Secretary of State put on the table the issue of reform of international law, which also includes the reform of United Nations.

The Holy See has been speaking for a long time about a reform of the United Nations, and the debate is very lively. Yet, Pope Francis did not mention it in his meeting with the heads of UN agencies, preferring to focus on other topics. It was a period of high tension between the Holy See and the United Nations, following the release of the concluding observations of the UN committees on the Convention on the Rights of the Child and the Convention Against Torture. It almost seemed as if the Holy See had decided to note the charges levied against her and to carry forward the line of the diplomacy of prayer and dialogue, which is very close to Pope Francis’ heart.

The most recent developments of the international situation had instead suggested a turnabout. The attacks to the Holy See’ssovereignty are not new. As a moral authority, the Holy See has significant influence in international meetings. Though it is not a Member State of the United Nations (it is just a Permanent Observer) the Holy See is one of the most involved states in the organization of multilateral events.

Providence plays a big role in this work. When the Holy See experts negotiate treaties, they are always fewer than experts of bigger states. Despite this inferiority, they have succeed in inserting «positive viruses» within international treaties. Integral human development – a notion of Catholic Social Teaching – is mentioned in a 1986 UN document on development. The Holy See also introduced in many treaties “the right of protection” – a notion that Cardinal Parolin has reiterated in his speeches in New York.

With Pope Francis, diplomatic engagement seemed to have been left somewhat aside. The Pope loves to underscore the need for a culture of the encounter, and made of prayer its main diplomatic tool, focusing attention on some topics in which he has been interested since he was archbishop of Buenos Aires, i.e. human trafficking and fighting poverty. Vatican diplomats had naturally adapted to this approach, including these issues in their speeches and interventions more often.

A change of pace was needed in any case, at every level. The recently-released response of the Holy See to the Concluding Observations of the UN Committee on the Convention for the Rights of the Child has been made on fine points of international law, with a firm rejection to the request of changing Canon Law. Then, on the basis of reports from the extraordinary network of information of nuncios, the Holy See decided for a more proactive strategy, at least for the Middle East.

Looking back to documents and data, it is possible to see that the Middle East crisis could have been widely forecasted, and it had. Not by chance, the post-synodal exhortation “Ecclesia in Medio Oriente” – which Benedict XVI personally gave to the Middle East Church in Lebanon in 2012 – clearly invited Christiansto remain in the land of the Bible and not to flee, despite persecutions. The document also urged the international community to protect Christians.

In the meantime, Benedict XVI had inserted in his speeches references to Christiano-phobia, after a long discussion about the correct use of the word. The Holy See has always opposed this kind of categorization in an international context, because it labels the issue in category terms, and as if this category was “more equal” than others. There are the human rights, which are universal, and the Holy See advocates their full application.

The use of the word «Christianophobia» was the result of an internal discussion that also contemplated the notion of «Christ phobia;» i.e. fear of Christ and his message. This is a profound notion, which had not been properly developed. After Benedict XVI’s resignation and the change in the post of Secretary of State, Vatican diplomacy pointed in other directions.

The worsening scenario in the Middle East and in other usually overshadowed areas like Ukraine once more pointed to the need of pontifical diplomacy to take the reins of the international discussion about international law.

In the end, the current crisis may be seen as a failure of the United Nations, which had been unable to interveneat a multilateral level, and above all react very slowly. The Human Rights Council in Geneva finally held an extraordinary session on the plight of Christians in Iraq only in September, although the crisis had broken out months earlier. And it has been individual states, rather than multilateral forces, that have intervened in the Middle East until now.

This is the reason why a reform of international law and United Nations is needed, and Cardinal Parolin has decidedly reignited discussion about this reform. It was also a topic of discussion during the gathering of the Middle East nuncios to the Vatican, held Oct. 2-4. Even this meeting has taken place late in this crisis; according to some, it should have taken place a year ago.

In three days, nuncios and Secretariat of State top officials, together with some heads of Vatican dicasteries, discussed how to help Christians in the Middle East. Among the heads of dicastery, Cardinal Tauran. In his capacity of President of the Pontifical Council for Interreligious Dialogue, he advocated for his dicastery to draft a strongly-worded declaration that called on the main actorsin interreligious dialogue to take a strong stance against the Caliphate’s crimes.

Tauran, one of the main actors of pontifical diplomacy, had understood the need to restore a diplomacy of truth. Unpleasant as truth sometimes is, only truth leads to real dialogue.

In the 3-day meeting, the lack of coordination between those who provide assistance, local bishops and the Holy See was also discussed. A key issue. The amount of financial aid delivered in the last five years has been high. Globally, Aid to the Church in Need has sent 3 million euros to Iraq and 2,4 million to Syria – and we are just speaking about emergencyassistance. It was calculated that Catholic institutions globally have sent 100 million euros to the Middle East, at the beginning applied only to the Syrian crisis and then extended to the whole region.

Given this data, it is surprising that the initial response to the crisis was to provide emergency aid and to build bridgesof prayer and dialogue, while going beyond pontifical diplomacy.

Pope Francis, it seems, has now opted for a change of pace. He will not abandon his commitment to a culture of the encounter, nor to the diplomacy of prayer. Even though a conflict broke out in Gaza a few weeks after the historical meeting for peace in the Vatican, the Pope has always maintained that the meeting was not in vain.

The Pope’s efforts were more successful when he launched the day of prayer and fasting for Syria. That day was however preceded by a meeting between the Vatican’s “foreign minister” Archbishop Dominique Mamberti and the corps of ambassadors accredited to the Holy See. Archbishop Mamberti outlined the Holy See’s views on adiplomatic roadmap for peace.

Now, Pope Francis upcoming voyage to Turkey becomes crucial. There, the Pope will meet with the ecumenical patriarch Bartholomew. The Pope and the Patriarch have started a dialogue on topics of common interest and carried forward a joint effort for peace. During the trip, Pope Francis will likely be called to take a stance. And he will have to do it in a Turkey that had just decided to authorize the possibility of sending land troops to Iraq and Syria.The stance the Pope will take, whatever it may be, will be of extreme importance.