Vatican Finances.External Consultants and Conflicts of Interest Church’s G8 proposes a commission to combat pedophilia and sex abuse by priests

By Andrea Gagliarducci On 2 dicembre 2013 · 7 Comments · In Vatican 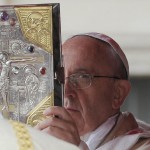 The Church according to Pope Francis is outlined in the nearly 260 page-long Apostolic Exhortation «Evangelii Gaudium»  (The Joy of the Gospel), that he wrote in two weeks in Spanish (with some neologisms and slogans) with a clear core message: the Church must come out, to the streets, and announce the Gospel to all. The Church, he notes, must undergo a renewal, starting with her structures and promoted by the way in which the Petrine ministry itself, the Papacy, is exercised.

Will Francis be the pope to revolutionize the Church? The exhortation shows that Pope Francis is solid on doctrine. Pope Francis’ view is «orthodox» on family (the whole paragraph 66 is dedicated to it), abortion (which Pope Francis firmly condemns), and on the non-admission of women to the priesthood. What Pope Francis preaches is a change of strategy in the Church, based on a change of the structures.

The Evangelii Gaudium was supposed to be the post-synodal exhortation issued to close the Year of Faith that began last year with the synod of bishops on the new evangelization. Monsignor Lorenzo Baldisseri, General Secretary of the Synod of Bishops, has underlined that Pope Francis did not want the exhortation to be defined «post-synodal,» and opted instead to issue a wider «programmatic document.»

Pope Francis himself stresses that the document is a program. «I want to emphasize – Pope Francis wrote in paragraph 25 – that what I am trying to express here has a programmatic significance and important consequences. I hope that all communities will devote the necessary effort to advance along the path of a pastoral and missionary conversion which cannot leave things as they presently are. ‘Mere administration’ can no longer be enough. Throughout the world, let us be ‘permanently in a state of mission.’»

Jorge Mario Bergoglio had already spoken about a «permanent mission» to the priests of the diocese of Buenos Aires. The then archbishop Bergoglio proclaimed a missionary year for the Jubilee. At its end, the priests asked him to convoke a synod to discuss and harvest the fruits of their missionary work. Bergoglio stood firmly against it: «A synod would just produce a document that will collect dust on bookshelves. I invite you to continue your missionary experience, to be in a permanent state of mission.»  It is what Pope Francis now wants for the whole Church.

There is more. Together with Pope Francis’ attacks against the idolatry of money, the society of waste, and unrestrained liberalism (attacks that he has increasingly dwelled into during his morning homilies at the Domus Sanctae Marthae, in the interview to the Jesuit-run magazine La Civiltà Cattolica, and in his public interventions) one can also appreciate his goal to reform the Petrine Ministry. And synodality will be crucial to this reform.

What is synodality, and why is it often presented in contrast to collegiality? Collegiality deals with hierarchy and administration, while synodality deals with the overall people of God. Synodality is an attitude, and Pope Francis really wants to develop it. It is unlikely that the Pope will change the very discipline of the Petrine Ministry. He will mostly change (in some ways, he is already doing so) the way the Petrine Ministry is put into action.

More likely, the structural reform will deal mostly with the bishops’ conferences. In paragraph 32 Pope Francis underscores that «a juridical status of episcopal conferences which would see them as subjects of specific attributions, including genuine doctrinal authority, has not yet been sufficiently elaborated.»

In fact, the discussion on a possible reform of bishops’ conference started long time ago. Would entrusting the bishops’ conferences with «genuine doctrinal authority»  mean that these regional conferences would be able to autonomously decide whether to allow communion to believers who have divorced their spouses and then remarried? Would this change and dissolve the functions and responsibilities of the Congregation for the Doctrine of the Faith?

It is rumored that a reform is already taking place, with priests being called back by their dioceses or sent back to them by their congregations, so that there will no longer be a central organization sending  its officials around the world to report on any problems. Instead, the national conferences of bishops would be able decide on their own about what constitutes a problem to be reported, thus making Roman central power gradually less influential. How the request for more peripheral autonomy will be reconciled with the petrine ministry is yet to be seen.

Pope Francis seems nevertheless to have a clear notion of what he wants to achieve. When he appointed Lorenzo Baldisseri as General Secretary of the Synod of Bishops, he called him in for a meeting in which he tore in half the Pontifical Annuary (the Vatican’s annual directory).  Referring to the Roman Curia half of the torn apart directory, the Pope told Baldisseri: «You do not need that part.»

Nobody knows yet what will be of the Vatican Secretariat of State, but it seems that Pope Francis does not want to resort to it that much. He chose a person he trusts as Secretary of State, Msgr. Pietro Parolin, who had just arrived at his post following an illness and who has already started to visit the different Vatican departments. He will handle the Vatican Secretariat of State dossiers, perhaps streamlining procedures.

Within the Secretariat of State there are ultimately two schools of thought. The first approaches the renewal of the Church from a managerial perspective, appointing external commissions and trusted advisers, launching media campaigns to underline the breach with the past and that times have changed. The second one is that of men within the institution, who must bear the decisions and are asked to tolerate the earnings that consultants and outsider specialists received ad-hoc, sometimes from outside donors. The men within the institution are working to give the Holy See a solid structure, moving beyond the episodes of corruption and resisting power play pressures.

Until now, Pope Francis had stood aside and watched. He has appointed a Council of Cardinals, which this week will once again gather, at the Vatican, to talk about the Pastor Bonus (the apostolic constitution that regulates the Roman Curia) and the possible reform of the Curia. Pope Francis has also established two «pontifical advisory commissions», one on the IOR (the Institute for Religious Works) and one to supervise and rationalize the economic structure of the Holy See.

In the meantime, external consultants, called in to assist with renewal in the Vatican, have increased: the Promontory Group for the IOR, the Grupo Santander for the Prefecture for the Economic Affairs of the Holy See, and Ernst & Young for the Vatican City State Governorate. This led to increasing concerns about possible conflicts of interest. The most salient is that of Francesca Immacolata Chaouqui, a member of an advisory pontifical commission and at the same time employed by Ernst & Young.  There have also been calls for greater transparency in Vatican expenditures: hiring consultants is very expensive, yet no Vatican balance sheet at the moment sheds any light on the fees these consultants are getting.

Pope Francis has probably taken note of these issues and has decided to appoint a delegate of his to the two papal advisory commissions. The Pope’s delegate will be Msgr. Alfred Xuereb, a priest hailing from Malta who had previously been Benedict XVI’s secretary. According to the Holy See Press Office, Msgr. Xuereb task is «to exercise a supervisory role and to inform the Pope, in collaboration with the Secretariat of State, on working procedures and on any initiatives to be undertaken. »

Pope Francis is in this way re-shaping his «revolution». In a short time, he has lowered the “rating” of the interview he granted to the Italian journalist Eugenio Scalfari, now taken off from the Vatican website; he corrected and specified some of his words about the Second Vatican Council, in a letter addressed to Msgr. Agostino Marchetto coinciding with the presentation of Marchetto’s most recent book about the Council and its hermeneutic of continuity; finally, he has clarified his doctrinal position, especially through the exhortation Evangelii Gaudium.

Ultimately, Pope Francis has been, until now, collecting ideas. The reform of the Financial Information Authority – a reform based on the vision and the work of Vatican officials who succeeded in getting a generally positive report on Vatican finances by the relevant European institutions– proved that Pope Francis had been able to resist the subtle appeals of followers of the old version of the Vatican money laundering law. The old law, in fact, allowed select top Vatican officials to manage information about the Vatican financial affairs in an autocratic and very personal manner, under the aegis of their special relations with particular (mostly Italian) extra-Vatican institutions.

Yet to be seen is whether Pope Francis will take a further step, going beyond the informal papacy and paying more attention to its institutional side. It is yet to be seen, as well, how will the pope develop a vision that will incorporate the Holy See sovereignty to carry forward the mission of the Church.

At any rate, Pope Francis deems these questions secondary. More than thinking about a possible Curia reform, Pope Francis aims to establish a general synodal attitude. His gaze is not set on the Curia, but outside the Curia. Not on the Secretariat of State, but on the bishops’ secretariats.

Pope Francis’ first goal is to announce the Gospel of mercy, to primarear (a Pope’s neologism that means to take the initiative in showing our concern for our neighbor). Primarear is the marching order for a reform of attitudes, which Pope Francis considers more important than the reform of the structures.