Pope Francis Rules Whereas Paul VI Reigned. Does the Vatican need a ruler or a king? 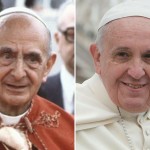 Pope Francis has always shown admiration for Paul VI. He revealed it for the first time in an interview granted to the Italian newspaper Il Corriere della Sera in 2014. Pope Francis’s response can also be considered a good summary of what he thinks and does.

Asked about Humanae Vitae, Pope Francis stressed that “Paul VI himself, in the end, recommended to confessors much mercy, and attention to concrete situations. But his genius was prophetic; he had the courage to place himself against the majority, defending the moral discipline, exercising a culture brake, opposing present and future neo-Malthusianism.”

Pope Francis added: “The question is not that of changing the doctrine but of going deeper and making pastoral (ministry) take into account the situations and that which people can do.”

The publication of Humanae Vitae, the encyclical on birth control, was a turning point in Paul VI’s pontificate. The encyclical left Paul VI subject to the criticism, and a victim, of a media campaign that opposed Paul VI’s decision.

Pope Francis’ exhortation Querida Amazonia can be considered a Humanae Vitae 2.0. The Pope is now under fire by a media campaign that expected a doctrinal revolution and found itself with a pragmatic papacy, characterized by a robust geopolitical interest (with a particular focus on Latin America) and not eager to start any revolution.

Commenting on this context, Christopher Altieri on Catholic Herald backed the description of Querida Amazonia as a Humanae Vitae 2.0, and then shed light on how things developed under Paul VI.

Altieri summed up his analysis most accurately: Paul VI reigned, he did not rule.

It is striking that the exact opposite is true of Pope Francis. Pope Francis rules, but he does not reign.

The lack of a reign is a specific theme of the pontificate, strongly connected with the issue of Pope Francis’ lack of interest for institutionality.

Paul VI knew and appreciated the importance of the pontifical court, although he reformed it, doing away with all the symbols that gave the idea of a secular State.

For this reason, we can say that Paul VI reigned. He did not rule, tormented by the doubts and the discussion that followed the Second Vatican Council. But he reigned. He gave the Church a structure and a framework that provided the foundation for St. John Paul II’s era. He gave the Roman Curia a new weight, carried forward the internationalization of the College of Cardinals, and reformed the Missal. After Humanae Vitae, he did not write any other encyclical. However, he did not stay silent. Paul VI’s voice was loud because it was the voice of a Pope. Paul VI did not speak about what he thought. He spoke about the Church and what the Church believes.

Pope Francis does not reign because he does not use nor conceives the symbol of the kingdom. To reign is an act of service, and this is how the Popes always interpreted it. To Pope Francis, to reign is to subdue the people, and in Latin America, no one can accept to be subdued to a king. They accept it from a leader, not from a king.

To rule, in the end, is mostly a practical and concrete exercise. Pope Francis likes to make decisions personally, and in many cases, these decisions clash with reality.

Pope Francis’ path to reforms consists of steps back and forth, because Pope Francis is a man alone at the command. All the reports Pope Francis has received have been focused on unexpected situations that needed a pragmatic and quick response. Pope Francis is good at addressing these issues.

However, this pontificate perhaps lacks a general vision of the challenges to the faith, and not only to the Church. Pope Francis launched the idea of a Church as a “field hospital”, always addressing emergencies. The field hospital is, in the end, the fruit of an emergency, it does not build long-term solutions.

There is, in the end, the need for a general vision that points to where the reforms are going and what Pope Francis wants. So far, everybody but Pope Francis has spoken of the Church of the future and how they want it.

Pope Francis’ vision is indeed strongly connected to the Latin American world. Likely, Pope Francis interpreted his election as a vindication for Latina America. Pope Francis incarnates Simón Bolívar’s dream, who wanted Latin America as a federation of States to conform a strong and renewed continent.

Even in this case, it is a pragmatic vision, not a long-sighted one. Similarly, for instance, John Paul II saw things from a very Polish perspective, and one of his main international goals – if not his principal international goal – was to pull out his native Poland and other countries from behind the Iron Curtain.

John Paul II had the sense of having an institution above him indeed, and he served this institution. So, when John Paul II became archbishop of Cracow, he looked for the most precious paraments to celebrate his first mass as archbishop. He wanted to give a strong signal: he was not only the archbishop; he was there to represent the Catholic Church.

Pope Francis, on the contrary, takes off the paraments and the symbols, to be perceived as an average person, thus losing the aura that characterized the popes. Paul VI never despoiled himself this way, because Paul VI was aware that the Pope must reign before ruling.

Pope Francis rules, but he does not reign. He sets up reforms, addresses concrete issues, and some of the most prophetic initiatives of his pontificate were born out of a practical response to an emergency.

Only history will tell.

2 Responses to Pope Francis Rules Whereas Paul VI Reigned. Does the Vatican need a ruler or a king?