Pope Francis, who will be the next Pope? Has Pope Francis completed his reforms? 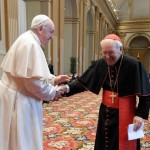 What should happen today in the Roman Curia (conditional is mandatory: rumors are rumors, things can change in a moment) is a shock and the definitive blow by Pope Francis to the Curia and the very philosophy of the dicasteries. On June 5, the apostolic constitution Praedicate Evangelium came into force, and therefore the Pope will have to rename all the dicastery heads.

Appointments are necessary. There is an entirely new Curia, with different assignments, and therefore the confirmations of those remaining in their posts must also be announced. Everything starts from scratch. Of course, if rumors are confirmed, this June 6 will be remembered as the day of one of the largest reshuffles of the Roman Curia since times immemorial.

Pope Francis should send Cardinal Luis Antonio Tagle to head the Dicastery for Bishops in place of Cardinal Marc Ouellet, who turned 77 and is two years beyond retirement age.

This would free up the post of pro-prefect of the Dicastery for Evangelization. Given that the other pro-prefect, Rino Fisichella, is an archbishop, it will likely be another archbishop. Perhaps Archbishop Giampietro Dal Toso, currently secretary of the Congregation for the Evangelization of Peoples.

The Dicastery for Catholic Education and Culture should go to Cardinal Tolentino Mendonça, who would also keep his post as Librarian and Archivist of the Holy Roman Church.

Cardinal Paolo Lojudice should be transferred to Rome as vicar of the Pope. The current vicar, Cardinal Angelo de Donatis, should take the place of Major Penitentiary, replacing Cardinal Mauro Piacenza, who is now 77 years old.

It is not clear who will go to the Dicastery for the Doctrine of the Faith. The obvious candidate has always been Archbishop Charles J. Scicluna, who was not on the list of new cardinals announced by Pope Francis on May 29. It is not a given that the new prefect must be a cardinal. Still, it is also true that the Pope once said that he had wanted the prefect of the Congregation for the Doctrine of the Faith and the Almsman as Cardinals because they represented the two arms of the Pope, faith and charity.

Some speak of Cardinal Tagle as ready for the role of prefect of the Doctrine of the Faith (who would then lead the Dicastery of Bishops instead, would need to be determined). Some think of a surprise from the Pope, even reasoning that the Pope could issue an “addendum” to the list of cardinals. After all, he has announced a consistory three months in advance, and there is plenty of time. Moreover, it would not be the first time: John Paul II did something similar in 2001, which has become the most impactful consistory in recent history.

But there are other departments to cover. Cardinal Leonardo Sandri, the prefect of the Congregation for Oriental Churches, is also beyond retirement age. He could stay a few more months, only to be replaced by Cardinal Dominique Mamberti, the current prefect of the Apostolic Signatura. And who would go to the Signatura? Possibly Archbishop Filippo Iannone, current president of the Pontifical Council for Legislative Texts. At the helm of the Legislative Texts, hence, would go Bishosp Marco Mellino, the secretary of the Council of Cardinals and one of the drafter of the Curia reform.

Then there will be new secretaries to be nominated, roles to be redefined, and restart the Curia machinery. This Monday, therefore, will be remembered as the day when the Curia indeed became Pope Francis’.

Thus, from the announcement of the consistory for August, Pope Francis will have given a definite shape to the face he wants of the Church in just one week. Should the Pope die before the consistory, the cardinals announced but not created would no longer become cardinals. However, the Pope will have helped direct things, give precise signals, and consolidate his loyalists.

Therefore, this possible reshuffle must be connected with the consistory of August 27, but above all with August 29 and 30. On August 27, Pope Francis will create 21 new cardinals, temporarily raising the number of cardinals who can vote in the conclave to 132. Of these, 62 percent would have been created by Pope Francis.

Interestingly, there will not be a Mass with the new Cardinals on the 28th, because the Pope will be in L’Aquila, for the perdonanza celestiniana, the special indulgence granted by Celestine V to his territory. Celestine V is also a Pope that renounced the Pontificate. Seen backward, Benedict XVI’s gesture to leave a pallium on his coffin during his visit in 2009 was considered a symbolic notice that Benedict XVI might have renounced as Celestine did. So, it is interesting that Pope Francis is going there in that very place instead of celebrating with the new cardinals.

On 29 and 30 August, the cardinals will meet for the first time since 2015. Then, the subject of discussion was the reform of the Curia. It will be the same in 2022. The difference is that in 2015 the issue was how to reform the Curia. In 2022, Pope Francis will ask the cardinals to take note of the work already done.

However, that meeting will be critical precisely because, for the first time, old and new cardinals will be able to get to know each other, understand what each other think, and even possibly think about the succession of Pope Francis.

Some think of a striking gesture by the Pope, such as his resignation. Instead, however, there is the idea now of starting to change the rules. Cardinal Oscar Andrés Rodríguez Maradiaga, who headed the Council of Cardinals, said it was time to provide norms for a pope’s resignation and reform the Canon Law code.

Hence the notion of having people in legal positions, aligned with the thought of Pope Francis, for a real coup, a “shock and awe” that would nullify all resistance. These sound like harsh words, and maybe they are. Yet it is striking that, recently, the diaconal ordinations of the diocese of Toulon in France had been suspended because they are primarily of a traditionalist orientation.

In practice, an indictment of the local bishop, who has not formed new priests more in line with an alleged conciliar liturgical spirit. And thus, the Traditions Custodes, which abolished the liberalization of the traditional rite, became a litmus test: from the way it is applied, one can understand how the bishops approve of the Pope’s line.

Whether resistance develops now, remains to be seen. After all, what is called resistance has been a dialectical skirmish, which, however, has never stopped obedience to the Pope. Now, something has changed, as evidenced by the votes for Cardinal Zuppi as president of the Italian Episcopal Conference: he was not the Pope’s candidate, but he was a candidate that the Pope could not refuse.

So what will the climate in the Church be like after this upheaval, if it will take place? Will fear prevail? And will this fear remain for the conclave to come?