Pope Francis, some clues on his way of thinking

By Andrea Gagliarducci On 1 febbraio 2021 · 6 Comments · In Vatican 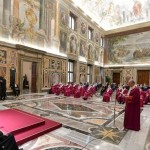 What Pope Francis thinks, or how he reasons, can be understood above all when the Pope speaks off the cuff, raising his eyes from the paper. Sometimes he inserts phrases into a prepared text; other times, he breaks himself completely loose and delivers real, impromptu speeches. On January 29, at the end of his address to the judges of the Roman Rota for the inauguration of the Judicial Year, Pope Francis gave an example of this “improvised teaching,” by concluded the prepared speech with an informal greeting to Monsignor Pio Vito Pinto, dean of the Roman Rota and close to retirement.

Pope Francis’ off-the-cuff speech is interesting for two reasons: it indicates what the Pope means by resistance to reforms, and it points to how the Pope looks at the history of the Church.

What did Pope Francis say? First of all, Pope Francis applauded Monsignor Pinto for “the tenacity he had in bringing about the reform of marriage processes.” There were two main points in the reform: overcoming the double-compliant sentence and the instruction on the short trial for causes of matrimonial nullity.

Let me explain briefly to those unfamiliar with the matter. For a nullity declaration to be considered valid, there was a need for a double compliant sentence. The ecclesiastical court’s nullity sentence of the first instance had to be confirmed by the ecclesiastical court of appeal. Instead, Pope Francis wanted the first sentence to be already enforceable and for the marriage to be declared null and void.

The short process is the natural consequence. Pope Francis wants the bishop to be the first judge, and he did not fail to emphasize this when he realized that the bishops themselves were trying, however, to still refer cases to the courts. The bishop, therefore, is the one who is called to decide on the nullity of marriage.

These two reforms had met with criticism, based above all on the functionality of the laws. Often, bishops do not feel sufficiently versed in canon law, and they benefit from the fact that canonists face a sentence of nullity with the appropriate juridical instruments. At the same time, the double compliant judgment served to prevent declarations of nullity from being granted lightly. Already, many diocesan courts were more likely to give declarations of nullity than others, and a disparity was also created.

Of course, there have also been objections dictated by special interests, because humanity is also made up of corruption. But the Pope considers all complaints as matters of special interests. “This reform – the Pope said – and above all the short process has a lot of resistance. After this promulgation, I received letters, many, almost all of notaries who were losing their clientele. There is the problem of money. In Spain, they say the monkey dances for money. And I also saw in some dioceses, with sorrow, the resistance of some judicial vicar who, with this reform, lost some power, because he realized that the judge was not himself, but the bishop.”

For Pope Francis, therefore, it is above all a question of power. The idea that those who have raised criticisms may have done so genuinely, worried about the reform’s functioning, has not been considered at all. Those who object to a decision by the Pope are immediately seen as standing in resistance.

Not only. For Pope Francis, there are no motivations other than those relating to special interests. Thus everything seems to be reduced to a certain human pettiness. This can be seen in the way Pope Francis deals with internal investigations when there is some suspicion of corruption: he attacks harshly, not even paying attention to procedural guarantees, starting from the assumption that he is the first judge – and he is, even in civil matters, in the Vatican.

Many of Pope Francis’ decisions must be read through this perspective: from the sudden expulsion of Cardinal Angelo Becciu to that of the commander of the Gendarmerie Domenico Giani, the summary investigations launched a year and a half ago (still without conclusions), the statements that he would not grant a pardon to a person convicted of abuse, and that indeed those sentences are final.

The Pope’s words also allow us to understand his vision of the world. Theology has little to do with it. The Pope is a pragmatist, he wants pragmatic solutions, and in fact, even the attention generated by the official speech was very practical.

Pope Francis focused on the good of the family, highlighted the difficulties of the one who suffered nullity and asked judges for pastoral attention, giving the example of children who may see their father unable to receive communion because he entered a new relationship.

However, the Pope did not give clear-cut answers; he stressed the importance of personal discernment; he said that Amoris Laetitia is a useful pastoral tool. Still, in reality, he cited paragraphs in which clear-cut solutions are not given.

In the end, the impression one gets is that, for the Pope, what matters above all is his point of view, his way of seeing things, and that all discernment must be done through that point of view.

After all, Pope Francis seems to interpret the Papacy as proof that God holds that his thoughts are the correct ones. Simultaneously, there is no possibility of pointing out any disagreement because any different point of view is labeled as resistance.

The off-the-cuff speech probably reveals something of the hidden Pope Francis that will help us understand the next steps of the pontificate. Pope Francis will progressively tend to do only the things that interest him. He met the Rota, despite his sciatica, delivering the speech while sitting. But he did not meet the diplomatic corps, even though he could make the speech sitting there, too. The audience with the diplomatic corps has been postponed until a later date, but some rumors circulating point to the Pope releasing the address without the protocol meeting.

Seemingly, for Pope Francis, in the end, the Holy See is not necessary. However, incredibly, the Vatican City State is, which it uses to carry out the extraordinary processes. The transparency operation thus risks being aimed at destroying the institution rather than helping it. And the question arises if, after all, this was the project from the very beginning.

6 Responses to Pope Francis, some clues on his way of thinking