Pope Francis Really Becomes Pope on the Day a New Encyclical is Released. Outsourcing in the Vatican 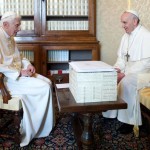 Those who expected Pope Francis to devolve the structure of both Vatican City State and the Holy See were probably disappointed. Yes, Pope Francis underlined repeatedly that «structures are important, but up to a certain point. » On the other hand, Pope Francis is also keenly aware that Vatican City State is «that piece of land that allows us to fulfill our mission» (in Pope Pius XI’s words) and has not done anything that could put a stop to the reform of the Vatican penal code. This reform was started under Benedict XVI, who worked to rebuild the judicial structure of Vatican entities and the Vatican itself.

This reform strengthens the weight of the Holy See in the international arena. Supported by a modern State with modern laws (often Vatican laws surpass those of secular states), the Holy See’s credibility, importance and influenced is enhanced. Ultimately, «no State is an island» and «States are in continuous renewal to be in step with the times, » Giuseppe Dalla Torre, President of the Vatican City State Tribunal, explained.

So, through three laws, Vatican City State made its legal system more complete. It eliminated the possibility of life imprisonment as a sentence, an issue which is currently at the center of an important debate in Europe. It inserted in its legislation punishment for crimes against minors. It strengthened the penalties for money-laundering and corruption. All of these activities were considered crimes even before the reform. The reform makes their definition as crimes more specific.

There is more. The three laws are accompanied by a Papal motu proprio that extends these norms to the Holy See. Thus, the new legislation not only applies to all the employees and officials of the  Roman Curia: It also applies to Papal nuncios and Holy See diplomats, and to the employees of bodies or institutions linked to the Holy See, whether they happen to be located in Vatican City State territory or not.

It is not the first time that certain aspects of the Vatican’s legal code are extended to the Holy See. A precedent was the motu proprio released in 2010 together with the anti money-laundering law.

Does this undermine Canon Law, truly the fundamental law of the Holy See? Some believe it does. Dalla Torre explained that in fact it is simply a mandate the Vatican Tribunal is given to prosecute, in certain specific cases, some of the crimes that have occurred in Holy See environments. The mandate, ultimately, is given by the Pope, who heads both Vatican City State and the Holy See.

Mainstream media have emphasized the codification of crimes against minors, interpreting it as a commitment to combat pedophilia by priests. In fact, these crimes became part of Vatican law pursuant to the Holy See’s signature and ratification of several international conventions. Ultimately, the Holy See followed the regular procedure: after committing to certain principles under a convention, the penal legislation is adjusted to apply those principles.

Dominique Mamberti, the Vatican’s Secretary of Relations with States, noted in an article on the Vatican daily newspaper L’Osservatore Romano that Vatican City State at its birth «completely adopted Italian legislation, both the civil and penal codes.» Mamberti explained that this was thought «sufficient to regulate common law within a State which raison d’etre lies in supporting the spiritual mission of the successor of Peter. »

Obviously, it is not sufficient any more, for different reasons: the Vatican borders are within Europe; the world has experienced globalization; and the Holy See has signed international conventions obliging it to adapt its legislation to fulfill these treaties’ commitments, just like any other State.

This is why Benedict XVI began a judicial overhaul of Vatican City State.

The Holy See is thus strengthened in its international relations, making the smallest State of the world one of the most active as measured by the number and importance of formal diplomatic relations it maintains.

This has allowed the Holy See to meet international standards without losing its sovereignty and specificity. For example, the anti money-laundering law has been  improved, and Dalla Torre – in a media briefing on July 10 – announced there will be more news in September.

A complete overhaul of the Vatican financial system can be expected, given the Vatican’s decision to report to the Council of Europe MONEYVAL evaluators progress on a wide range of recommendations, beyond what regular procedures require.

It is noteworthy that the first revision of the anti money-laundering law was issued together with the signature or ratification of some international conventions. In fact, the Holy See’s goal is to earn the international community’s recognition and appreciation for these measures, instead of opting for very limited change and using it as a «fig leaf» to cover underlining problems.

Conventions also were the «engine» propelling the codification of particular cases of crimes in the Vatican penal system, on issues ranging from torture to crimes against humanity, pedophile pornography, corruption, and corporate legal responsibility standing side by side to personal legal responsibility.

This is the big revolution that Benedict XVI started. It does not grab newspapers headlines. It does tell, however, that the Vatican is enhancing its legal code, building a sound juridical structure, and exercising its own sovereignty to become more open to the world.  The MONEYVAL evaluation process represented a first push in this direction, but certainly not the only one or even the most important one.

Benedict XVI initiated other reforms. For example, the new constitution of Caritas Internationalis, which filled with juridical substance one of the most important international structures of the Church.