The Eclipse of God. Ratzinger’s Students to Address How to Overcome it. Syria. The Vatican Peace Efforts. 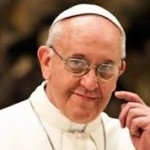 Pope Francis has started to form his team. And he has done so from the very top. As Secretary of State, Pope Francis has decided to appoint Pietro Parolin, an Italian hailing from Veneto and born in 1955, who until now was Papal Nuncio in Venezuela. He is an experienced diplomat whose career path evolved under Secretary of State emeritus Angelo Sodano. Parolin proved his competence and skills when he worked at the Secretariat of State, managing the Vietnam and China portfolios. In addition, Parolin is very much esteemed in South America.

The appointment of the Secretariat of State is just one piece of the Curia puzzle. On Aug. 30, Pope Francis fitted another piece, appointing the number two position for the Vatican City State government. Fernando Vergez, who until now headed the Telecommunications Department of the Vatican, held the right qualifications and was appointed.

Parolin will start on his new job on Oct. 15, when Pope Francis will «receive for an audience high- ranking members and officials of the Secretariat of State, »  in order to publicly thank Bertone for his faithful and generous service to the Holy See and to introduce Bertone’s successor to Secretariat of State officials.

Actually, it is a homecoming for Msgr. Parolin: He served in the Secretariat of State from 1992 to 2009, at different posts, most recently and importantly as the Vatican’s equivalent to a vice minister for foreign affairs, overseeing sensitive portfolios and closely following the outcomes of the Second Gulf War. Later, As papal nuncio in Venezuela, Parolin did a great job reconciling the Venezuelan government and the Church.

The new Pro-Secretary of State (Parolin will become Secretary of State only after Pope Francis creates him cardinal) is happy. He issued a press release thanking everyone, from his family to Pope Benedict who «ordained me bishop,»  and affirming that he «stands before this new service to the Gospel, the Church and Pope Francis with trepidation, but also with confidence and serenity, ready – as the Pope always calls for – to walk, build and confess.»

Parolin will work with Bertone’s team, since Pope Francis confirmed all the top Secretariat of State officials.  These include Parolin’s deputy, Msgr. Angelo Becciu; Secretary for Relations with States, Msgr. Dominique Mamberti; Undersecretary for Relations with States, Msgr. Antoine Camilleri; Assessor, Peter Bryan Wells. The Pope also confirmed in his charge the Prefect of the Pontifical Household, Msgr. Georg Gaenswein.

Parolin’s appointment means that a diplomat will once again be heading the Secretariat of State. Card. Bertone, who served as Secretary of State under Pope Benedict XVI, was not a diplomat and he often claimed that he was mostly «a Church secretary.»  Bertone’s critics often lamented and called attention to the fact that he was not a diplomat.

In fact, any pretext was good to attack Bertone. Even Francesca Immacolata Chaouqui, a member of the commission appointed by Pope Francis to rationalize Vatican expenses and management, described Bertone as a «corrupt man»  in a tweet. This became public knowledge, but carried no consequences. Nobody, from inside the Vatican, said a word to defend Bertone.  During a lunch he had with the Pope on August 15,  Bertone let it be known that he had taken note of this silence, and told him that he wanted to leave as soon as possible. The Vatican press release specifically and intentionally notes that Pope Francis «will publicly thank»  Bertone in the upcoming meeting.

Angelo Sodano was also present at the lunch with the Pope on Aug. 15. The Secretary of State Emeritus is again a king maker, it seems. In fact, Parolin is widely appreciated, but he is also considered by many observers a Sodano’s man. The same observers note that Fernando Vergez, the new number two of the Vatican City State government, comes from the ranks of the Legionaries of Christ, traditionally a Sodano’s feud. Pope Francis, in the press conference he held coming back from the Rio World Youth Day, underlined that he felt nostalgia for the «old curiale,»  and Sodano is ultimately one of the oldest representatives of a certain idea of the old curia.

Vergez, a Spanish priest hailing from Salamanca, is not only a gentle and competent monsignor who improved the Vatican’s website, which under his direction has expanded to cover seven languages. He is also a Legionary of Christ, and it is rumored that he was one of those who testified that the Legion’s constitution presented to the Pope (and then approved by the Vatican) by the Legion’s founder Marcial Maciel was different from the one used within the religious congregation.

Vergez also stands out because he has been for years the personal secretary of Card. Eduardo Pironio, from Argentina, the unforgotten organizer of World Youth Days.

Vergez will replace the archbishop Giuseppe Sciacca as the second highest-ranking official in the government of Vatican City State. Last Saturday, Sciacca was appointed adjunct secretary of the Supreme Tribunal of the Apostolic Signature, a sort of court of last appeal for canon law. When friends of Pope Francis are asked about the reasons for giving Msgr Sciacca a new assignment, they explain that the Pope thought about strengthening the Signature, following a typical Vatican practice to justify with subtle arguments each promoveatur ut amoveatur (promote to remove). In fact, Sciacca is paying for a certain level of activism during the final period of Benedict XVI’ pontificate. His proclivity to call attention to himself and his networking had been considered expressions of careerism that needed to be downplayed.

If Benedict XVI’s team was recruited from the ranks of what used to be the  Sant’Uffizio, Pope Francis’ team will probably be comprised of Argentinians or other Spanish-speaking Church officials who know Latin America’s problems well.  These officials gained the trust of the then- Card. Jorge Mario Bergoglio, when he had to endure a difficult relation with the Vatican Secretariat of State and the Papal nuncios in Argentina over the selection of bishops in that country.

It is thus not surprising that another Argentine priest is hailed as a rising star in the Vatican. He is Msgr. Daniel Alejandro Giorgi, rector of the major seminary in Buenos Aires. Pope Francis has tracked his career from its beginning. Giorgi was also present at the August 15 lunch (which followed the Mass and the Angelus of Ferragosto celebrated by the Pope in Castel Gandolfo).

Pope Francis will probably proceed one step at a time, with no revolutionary, sudden changes. For example, the pressure to dismiss Bertone have been very strong. However, Pope Francis – who often speaks with Benedict XVI and asks for his advice–  resisted the push to oust Bertone, and got Sodano to advocate for Parolin. In fact, pressure may be counterproductive because it raises suspicions. Since Pope Francis likes to work by himself and does not involve the Secretariat of State much, he had no problem with leaving Bertone at his post until now.

According to Vatican sources, Bertone would have kept his post at least until the meeting of the group of cardinals the Pope chose to counsel him on a Curia reform, but it was Bertone himself who insisted on  retiring. The meeting will take place in the Vatican Oct. 1-3.

Pope Francis’ working methods are become ever more clear. Some insiders maintain that, beyond his lack of interest over institutionalization, Pope Francis knows very well what he is doing. He wants to see others backing his views. According to an American monsignor, Pope Francis is acting as one who  «would create a commission to decide how to get from Washington to New York. Everybody knows that the best thing is to take a high-speed train heading north, and everybody knows that a commission would reach this conclusion. The Pope, however, wants to count with a strong backing for his views.»

In fact, the «gang of cardinals» (whose appointments follow a regional diversity model, similar to that of Jesuit commissions) follow this criteria. Pope Francis agrees with the views of each of the cardinals he chose. Particularly – it is rumored – Pope Francis thought is in perfect tune with that of Card. Sean O’Malley, the archbishop of Boston.

The same criteria informed the selection of the members of the commission on the IOR (the so-called Vatican bank) and of the commission to oversee the Vatican government. The commissions will make their proposals, but it remains to be seen what weight Pope Francis will give to these recommendations.

In the meantime, lobbies have flourished and are applying some pressures. This is why Pope Francis would have thought about– encouraged by the work developed under Benedict XVI – to institutionalize his path to renewal. It should not lead, however, to an excessive institutionalization, which Pope Francis would not approve or allow. It would be a way to protect the outcomes of his decisions and to give the Church a solid framework beyond its image, which is for many a renewed image.