Pope Francis, the challenge of not reducing religion to culture 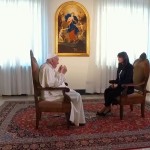 Pope Francis has appeared in two programs on the Italian government tv channel RAI during the beginning of the Easter period. The first, A Sua Immagine, is a historical program made in collaboration with the Italian Conference of Bishops, also containing the Angelus of Pope Francis every Sunday. The second, “I volti dei Vangeli,” was instead a production of RAI Cultura together with the Department of Communication of RAI, which included various comments by the Pope about the protagonists of the Gospels. It was a program designed for a Catholic broadcaster for Christmas, with other themes, and then resold to RAI as a by-product.

The pervasive presence of the Pope in the media is not surprising. More than any other Pope, Francis grants interviews, shows himself on television, takes political positions (such as the one on NATO in the last interview with Corriere della Sera), and makes his voice heard.

Yet this pervasiveness of the image of the Pope risks having the opposite effect, namely that the Pope becomes a sort of routine presence in the media, that his image becomes predominant and also overshadows the Church itself. In practice, the person of the Pope becomes a cultural fact, a voice like that of many other intellectuals and not in the information landscape.

The question must be addressed because the reduction of the Pope’s appearances to habitual events risks reverberating on the whole Church and, in general, on how religions are perceived in society.

The signs in this sense are all there. RAI, the Italian state TV, has had a structure called “RAI Vaticano” since 2002, which deals with religious information. But, over the years, it has been slowly deprived of its characteristics, being reduced to a production structure of a single half-hour program that airs once a month, late at night.

However, since 2021, with the new organizational structure of the network, religious information has become one of the responsibilities of the Culture and Educational Department. Therefore, in practice, religious information becomes only a cultural phenomenon, not worthy of further study or a specific direction attentive to its vocabulary and that looks at religions in their fundamental role within society.

It seems like a marginal question, but it is not. Because it is precisely by reducing religion to a cultural phenomenon that, in recent years, what in Quebec, Canada has been called a quiet revolution has taken place. A revolution that has brought a wave of secularization in society, putting religions aside to deny their undeniable spiritual significance.

In Europe, the last revolution of this kind took place in Belgium. In the span of four years, the so-called cours de rien, the civic education courses to be added and then superimposed over the hours of religion, were established. Initially, civics courses entered the school curricula on tiptoes, one hour a week. Now, the hours have been doubled, while the religion courses have become optional, with a coup that occurred with a parliamentary vote in which not even the Belgian bishops were involved. In this way, the transition towards neutral teachings developed by professors considered neutral, i.e., without religious information, is being completed.

As mentioned, the model had developed in particular in the French-speaking region of Quebec, Canada, where at the beginning of the 2000s, a compulsory course in ethics and culture of religions was introduced with teachers who were forbidden to present themselves as believers and to belong to a faith community. The class provided information on the world’s main religions and discussed controversial issues, such as abortion and euthanasia, with the obligation not to take a position one way or another.

The philosophy behind this approach was provided by the creator of the courses, the philosopher George Leroux, who stressed that “it is now time to think about the transmission of religious culture no longer as faith, but as history, as a universal heritage of “humanity”.”

It is striking that the introduction of these courses was approved by a conservative government, also comprised by Catholics. It is a sign that even in the Catholic world, the extent of the challenge is not understood.

A challenge that has already reached extremes. On May 3, a resolution on the persecution of minorities based on belief and religion was voted in the European Parliament. Point 22 states that the Parliament “expresses deep concern about the misuse and instrumentalization of belief or religion to impose discriminatory policies, laws, including criminal laws, or restrictions that contradict and undermine the rights of LGBTIQ people, women and girls and restrict access to basic services, such as education and health, including sexual and reproductive rights, criminalize abortion in all cases, criminalize adultery or facilitate religious practices that violate human rights.”

We have already reached the point where men of faith cannot speak, cannot have an opinion, and cannot contribute to the construction of the world. Therefore, any speech considered to be religious is persecuted. Any need that arises from a spiritual condition is not considered.

It was a trend already evident during the COVID emergency, when the restrictions did not consider people’s spiritual needs, with the enforcement of restrictions for religious functions while exceptions for material needs were considered.

These are all consequences to face. It is striking that the Italian state-owned television, which has always had a privileged relationship with the Holy See, is joining this race for the marginalization of religion, basically establishing that a Pope who celebrates the Via Crucis at the Colosseum or gives interviews about culture, is engaged in culture rather than sending messages of faith.

The silence of the Vatican’s upper floors on this matter is also surprising. Yet, when after 9/11 there was talk of international schools under the aegis of international bodies to teach the culture of religions and avoid extremism, the Holy See did an incredible job behind the scenes precisely to emphasize that no, religion was not just a cultural fact, and therefore could not be treated as such.

It is a problem of the secularization of religion. With his idea of the outgoing Church, Pope Francis has a strong presence in the media. As long as he does not tackle the significant issues, until he reaffirms the importance of the religious fact, he will remain a popular Pope but irrelevant to the substantial and real challenges of the time. And everyone will be able to take advantage of this situation.

After all, the words of the Pope make a lot of money, and it is enough to read the names of those who produce the interviews to understand that by now, the risk of the Pope becoming a business like any other is already there, is present.

3 Responses to Pope Francis, the challenge of not reducing religion to culture