Pope Francis, the change of an era 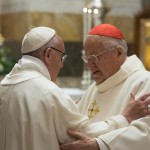 An old Latin adage notes: motus in fine velocior, movement is faster toward the end. We do not know if we are approaching the end of Pope Francis’ pontificate. This will only depend on God’s will or the Pope’s intention to ever decide to renounce the papacy. Yet it is noteworthy that Pope Francis accelerated some processes at the end of the year, and this cannot be underestimated.

In his traditional Christmas address to the Roman Curia, Pope Francis provided a sort of program for the government. He responded to criticism and underscored that the reform was never intended to be born in a vacuum that ignored what was done in the past.

At the same time, the Pope said that reforms are there to stay, since we are not facing an era of change, but a change of an era. Above all, Pope Francis labeled as “rigidity” the attitude to oppose the reform, noting it is a negative attitude.

It was not the first time Pope Francis vividly defended his reform. Pope Francis has always used the annual Christmas address to the Curia to deliver specific messages. In his first year, Pope Francis shocked the Curia with a list of Curia maladies. The year after, he explained the remedies to the diseases. After that, he mostly dedicated his remarks to the steps forward in the reform. This time, he decided to defend the reform sharply and to launch his program.

Pope Francis thus explained that the Congregation for the Evangelization of Peoples and the Congregation for the Doctrine of the Faith would undergo reforms. He underscored that we do not live in a merely Christian world, and this is something we have to take into account. He said that everything, in the reform, must have the goal of evangelization.

We do not know much about the Curia reform, but we know it will come soon. Pope Francis already did many things without waiting for the final draft of the reform. Among these, the establishment of the Pontifical Commission for the Protection of Minors; the Dicastery Laity, Family and Life; and the Dicastery for Promoting Integral Human Development.

The latter was identified by Pope Francis as one of the pillars of the reform. Pope Francis wants it to be the place of origin of his notion of the social teaching of the Church. Integral social teaching that would also shape an ecological conversion, as he requested in the 2020 message for the World Day of Peace.

Last week, Pope Francis also announced the change of the rules for the office of the dean of the College of Cardinals. The “dean” is a primus inter pares, a “first among equals”. The position of dean was a life-term position. Following Cardinal Sodano’s resignation after holding the position for 13 years, Pope Francis made it a 5-year term position, renewable just once.

More than a reform, Pope Francis is setting in motion a de-institutionalization of the Catholic Church. The Catholic Church is no longer the main character in society. To Pope Francis, this is the change of an era. And this change bears the need of a more frugal and nimble Church. A Church that is less anchored in society and more the “yeast” of society.” Pope Francis considers protagonism – that he likely associates with proselytism – as an evil for the Church, something that stands in contrast with evangelization.

All of his moves go in this direction, and he is persuaded by anyone using these arguments. Even his actions on financial transparency, that substantially led to a return to a privileged bilateral relation with Italy, show that the Pope is afraid of the Church having to defend herself from scandals. The Pope wants a lower profile. He does not even appreciate the leading role the Holy See has taken on financial transparency. There is too much visibility that, to him, leads to corruption.

This rationale is in effect regardless of people. There are, in fact, many noteworthy contradictions. For example, Cardinal Fernando Filoni had been elevated to the rank of cardinal bishop. Pope Francis did not, however, hesitate to move him to the position of Grand Master of the Equestrian Order of the Holy Sepulchre when he needed to make room for Cardinal Tagle.

To Pope Francis, every position in the Curia is an office and must be treated as an office. The reforms foresee only five-year term positions, renewable only once. It means that there will be no one in the Curia long enough to change things. It also means that it will be challenging to be a careerist. Pope Francis’ goal is to avoid careerism.

Until now, Pope Francis considered the real reform that of the profile of bishops. Now, it is time to change the Curia itself, once de-institutionalized. It is the right time to do that, after seven years of pontificate. And everything indicates a move toward the end.

The decision to bring Cardinal Tagle in Rome might indicate either that the Pope wants him as his successor or that he wants to burn his candidacy. Everything has changed, by the way, and nothing can be read through the old lenses.

Even the rationale that cardinals would never choose a young Pope might be no longer valid. When the majority of the voting cardinals had positions in the Curia, a young Pope might mean a slow demise of their world and a too-long government. Now that all the cardinals are diocesan, it is not a big deal whether the Pope is young or old.

The model of the Church changed, though. There is a less glorious and less institutional Church. The Church says to be missionary. At the same time, she seems closed into herself, almost scared of the world.

However, the Church returned to the essentials of the mission defending the institution, forming men and culture, making culture, and strengthening the bonds with the Apostolic See. The secularizing trends were providential because the Church gradually broke free of special relations with States and related privileges, and found a new institutional way that gave her dignity, authenticity, impact. Now, the Church has a weakened institution, and sometimes it seems the Holy See is the “ancillary of States” in the international arena. It is an evangelizing Church, perhaps. In fact, it seems a less prophetic Church.

2 Responses to Pope Francis, the change of an era