Pope Francis, the Church after coronavirus 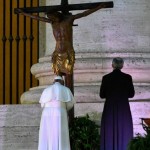 During the past week, Pope Francis postponed by a year the World Youth Day and the World Meeting of Families. And he did the same for the International Eucharistic Congress, that was set to take place in Budapest in September 2020, and will now take place on September 2021. The life of the Church has been like frozen for this year. Pope Francis will not, in the end, have any international trip this year. 2020 will be remembered as an intermediate year, a passage that will lead the Church towards a new era.

The Church, after the coronavirus, will re-emerge after months without the possibility to celebrate public Masses. The issue seems crucial now, but the faithful felt the issue since the beginning. The Church, and in particular the Holy See, lacked vision. In the beginning, the emergency was expected to last only for a short time, no longer than one month. In the end, it was not even possible to celebrate Easter.

Because of this lack of vision, the Church was utterly subordinate to the decisions of the local governments. The Holy See did not provide precise indications to ask for at least a formal respect of religious freedom, and accepted that the Italian police forbade access to St. Peter’s square. Paradoxically, the Basilica of St. Peter was open, but there was no possibility for the faithful to access it.

Most of the bishops’ conferences adapted to the Vatican line to accept the measures of the governments and avoided any gathering, not even for the Masses. This way, the States could ignore freedom of worship. The provisions and exceptions dealt with material needs – like the possibility to go to the supermarket – but not with spiritual needs.

Pope Francis himself remained silent, until Friday, Apr. 17. During one of his daily homilies, the Pope underscored that the Church is meant to be “with the people and the Eucharist,” and that what the Church was living through was an emergency.

We are now heading towards the “phase 2” to block the infection. The bishops’ conferences already began to make their moves. Italian bishops communicated that they in close communication with the government to get gradually back to have public Masses. Argentinian bishops, on their part, presented a 13-point plan to the government to have public celebrations again, though respecting the health safety measures.

Could not these dialogues have taken place before?

The Church, after the coronavirus, will be a weaker Church institutionally. The Church was unable to defend the faithful and to defend the possibility for the faithful to take part in the religious celebrations. The Church was, in the end, unable to operate as an institution that protects its rights. In Italy and France, the police even irrupted into the churches to interrupt masses with some public. This is not only against religious freedom, but also against the sovereignty of the Church. No religious celebration can be suspended, and neither can the police break into a church. In Italy, the concordat between Italy and the Holy See specifically states this.

The Church has tried to be present. While it is impossible to celebrate public masses, their broadcast live and in streaming have multiplied. The bishops have never been so much under the spotlight. However, one thing is missing: the community.

In the beginning, the suspension of the public Masses, along with the shutdown, was described as an opportunity to rediscover personal and private prayer at home. Parishes had given guidelines, provided suggestions, invited everyone to strengthen their spiritual life. This was a positive aspect.

During this lockdown period, the Church did not lack public Masses. The Church lacked the community. A priest in Rome celebrated the Easter Mass on the rooftop of his church so that people could lean out of their balconies and windows and participate. There should have been more initiatives of that kind. The impossibility of meeting and moving made Catholic lose some of their sense of community. The risk is to become a faith of individuals connected to the Mass but without any shared life together.

To restore the community will be one of the challenges of the Church after the coronavirus. The parish priests will be on the front line. It would, however, be nice for the Holy See to take on the issue, with initiatives and proposals. The priests need to be supported; they must not feel alone in this challenge.

The Church, after the coronavirus, will also have to be able to provide a long-term project for its future presence in society. Until now, Masses have been broadcast on every platform, with no problems. Nobody considers the fact that any government or authority might shutdown the broadcast at any moment. Just one click, and the world would have been Massless. The Church will have to find a way to reaffirm its freedom to proclaim and spread the faith.

The Church will also have to focus on some big themes. For example, the support for Catholic schools and universities that the crisis strongly hit: it will be challenging to keep them up, and it will be even more challenging to pay the tuition to attend the schools. The Church will have to fight against the interest of some States that do not want to maintain space for private institutions of education. The economic crisis feeds the dictatorship of relativism.

Finally, the Church, after the coronavirus, will have to rethink itself. Pope Francis saw in this crisis the opportunity to change the economic model, and his letter to the popular movements delivered on Easter is a definite sign . The Pope asked to re-start from the poorest one and to take advantage of the stop to work for a new economic paradigm.

However, it seems this shift of economic paradigm would come later. The Church after the coronavirus will be a Church deprived of its popular piety (how many processions canceled?), of its culture, of its community. It is a Church of individuals that will find it challenging to concretize the principles of faith in real life.

The starting point will lie on these fundamental issues. The goal will be building a new civilization and not merely a new economy. The basis of this civilization will not be anything else, but the community gathered together around the Eucharist. Will Pope Francis understand these challenges?

3 Responses to Pope Francis, the Church after coronavirus