Pope Francis, the Church in Italy as a mirror of the pontificate 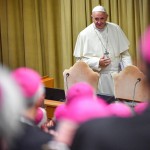 The appointment of the new president of the Italian Bishops’ Conference (CEI) next week will signal how Pope Francis wants to delineate the last contours of his pontificate. It is a common view that by now, the pontificate of Pope Francis cannot have great peaks of novelty but only a last propulsive thrust before anchoring until the end of the pontificate, as long or as short a period as it may be.

Why is the appointment of the president of the Italian Bishops’ Conference important? Because the Pope is the primate of Italy, and the bishops themselves have requested the continuation of the ancient Italian tradition that the president of the bishops be chosen directly by the pontiff. Pope Francis wanted a vote to be introduced, but in the end, the bishops will bring the Pope only a list of the three most-voted candidates. The Pope will decide to draw from that list or not.

The fact is that no bishop thinks of voting for someone the Pope would not want as president. Five years ago, Cardinal Gualtiero Bassetti was elected president after the Pope had signaled his approval in every way possible: he had created him a cardinal despite being archbishop of a non-cardinal diocese, Perugia, and vice president of the CEI; he had received him in an audience in place of the president in office, Cardinal Angelo Bagnasco; he had appointed him a member of the Congregation for Bishops.

Logically the Italian bishops went on with that profile. While he formally said he would prefer the bishops to choose their president themselves, Pope Francis makes clear what he wants.

In an interview last May 6 with Corriere della Sera, he said he wanted the president to be a cardinal and authoritative. So, he narrowed the list of possible presidents to two personalities: Cardinal Matteo Zuppi, archbishop of Bologna, and Cardinal Paolo Lojudice, archbishop of Siena.

There might be a surprise, though. Suppose Pope Francis convenes a consistory for June 29, also deciding to make the archbishop of Naples Domenico Battaglia a cardinal. In that case, he could suddenly be in the run for the Italian Bishops’ Conference presidency.

However, the three profiles we are talking about actually represent the paradigm shift that Pope Francis has implemented for the Church in Italy. The Pope chooses bishops with a robust pastoral profile, preferably who show themselves close to the poor and with good press precisely from this commitment. He has not often moved bishops from one diocese to another. Still, he has chosen to promote priests, even for essential dioceses, such as the archdiocese of Turin or that of Genoa, to change profiles without moving people too much.

The Pope’s doings with respect to the Church in Italy are an excellent example of how Pope Francis moves on various fronts. On the one hand, Pope Francis wants synodality and discussion and encourages personal decisions. But, on the other hand, he clearly says what he wants and complains if this is not done.

Pope Francis gave a road map to the Church in Italy at the Ecclesial Conference in Florence in 2015. But, unfortunately, the bishops decided otherwise, and not necessarily as an act of resistance to the Pope, but rather to respect a way of doing things that has evolved over the years. Pope Francis lamented their choices, even publicly, to the point of de facto pushing the Italian Church to work on a Synod, rather than on the model of ecclesial assemblies.

Pope Francis has not intervened strongly for a particular profile for the bishops. On the contrary, he introduced new bishops, even in essential places, without moving those who already had the experience of administering dioceses. The move is officially to avoid careerism. However, it is fair to note that the Pope also wants new people who align with his thinking, or at least with less of a personality, to start a new process.

Pope Francis allows people to think that he is going to decide in a particular way but then surprises everyone and makes some different decisions. We will see if this may also be the case for the new president of the Italian Bishops’ Conference. First, everyone was thinking of Cardinal Matteo Zuppi. Still, now it seems that the Pope has suddenly turned to Cardinal Lojudice in a move that would be completely unexpected and that would lead to a domino of new appointments.

The Pope’s rules work in principle, but in reality, they are also set aside with cynicism when the situation requires different approaches. Pope Francis is not only a man alone in charge, but he is also very pragmatic, bordering on cynicism.

The decisions on the Church in Italy shows what the Pope wants to do. If there is a consistory soon, it will mean that he has already decided how to change the college of cardinals definitively and what indications he wants to give for the president.

Then there will be the World Meeting of Families in Rome. It will be an opportunity for Pope Francis to guide the family ministry, which has been his primary concern since the beginning of his pontificate.

How the Pope’s synodal journey will evolve is also to be determined, because his idea of a Church in a state of permanent synod remains strong.

In short, we start with Italy to get an idea of how it will be in the rest of the world. And it is ironic that the Pope, who wanted to make Italy less heavy on the ecclesiastical chessboard, then, in the end, looked to Italy in many fields.

An Italy that has made a come back with the Vatileaks trials, tax agreements, new leaders for Vatican finances, and even judges for the Vatican court. He is a Pope, after all, much more Italian than he wants to make us think. And it should not be discarded that the last great thrust of the pontificate will turn out to be, in the end, a step backward.