Pope Francis and the reform of the Church Vatican communications evolve in Francis’ image. Can this eventually help Benedict?

Pope Francis, the Church of the future starts now 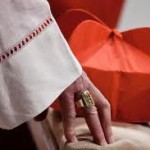 The February 22 consistory will start shaping the future Church. The numbers are clear. From now to 2017, 32 cardinals will turn 80, thus losing the right to vote in a future conclave. And from now to Feb. 22, there will be 106 cardinal electors, so Pope Francis had in fact 14 “red hats” he can grant this year, according to the norm introduced by Paul VI which sets the maximum number of voting cardinals at 120. The Pope will create (in the language of the Church, cardinals are “created”) some 46 cardinals from now to 2017, more than one third of the cardinals voting in the conclave.

What is Pope Francis’ perspective? Giving a glance to the list of new cardinals, Pope Francis wanted to stress the attention on the “peripheries” of the Church, and at the same time he wanted to signal that no more appointment in a major diocese can be considered a privilege.

In the past, it was granted  that being a bishop of a diocese by tradition led by cardinal would have the red hat in dotation. Hence, the pressures moved by many “ecclesiastical lobbies” to appoint their “faithful” as bishops of certain diocese, or as head of certain Vatican dicasteries.

Pope Francis decided not to deliver red hats to the chiefs of Vatican dicasteries, and he made it clear that being the administrator of an important diocese is not a criteria anymore.

The Curia will have just four “berrette rosse” ex-officio: the Secretary of State, Pietro Parolin; the Prefect for the Congregation of the Doctrine of the Faith, Gehrard Ludwig Mueller; the Prefect of the Congregation for the Clergy, Beniamino Stella; and the General Secretary of the Synod, Lorenzo Baldisseri, whose charge is not in fact part of the ranks of the Roman Curia.

The latter seems to have a key role in pushing forward Pope Francis reform, and not by chance he was the second cardinal of the Pope Francis list. It is yet to be understood how the “greater synodality” called-for by the Pope will be implemented, but certainly Baldisseri is increasing his influence. For instance, he managed the periodic meeting between the Pope and the heads of Vatican dicasteries, a meeting that was traditionally coordinated by the Secretary of State. And it is always Baldisseri who is visibly engaged in a reform of the synod of bishops, trying to put in order an issue under discussion going back to Paul VI.

More than on the Curia, Pope Francis’ attention was focused on the “peripheries of the world,” but he will also be very attentive to balancing the “geography” of the college of cardinals. Pope Francis wanted to avoid the criticism levied against Benedict XVI after his first consistory in 2012, which many considered “too Italian” and “excessively Curia-oriented”. Benedict XVI was in fact merely filling the “holes” in the puzzle, mostly granting ex-officio red hats. His work was completed with a second consistory in 2012, with no Italian nor European cardinals, in order to underline the universality of the Church.

Pope Francis could be criticized for the opposite reason, i.e. for having a “too much of a Latin American” consistory. There will be five new Latin American cardinals: the Brazilian Orani Tempesta (Rio de Janeiro), the Argentinean Mario Aurelio Poli (Buenos Aires), the Chilean Ricardo Ezzati (Santiago) and the Nicaraguan Leopoldo José Brenes Solòrzano (Managua). Pope Francis bestowed the red hat on two cardinals from Africa (Jean Pierre Kutwa and Philippe Nakellentuba Ouedraogo); two from Asia (Andrew Yeom sou-jeong and Orlando Queved); and six from Europe (Gehrard Ludwig Mueller, Pietro Parolin, Beniamino Stella, Lorenzo Baldisseri, Gualtiero Bassetti and Vincent Nichols), one from North America (Cyprien Lacroix) and one from Central America (Chilby Laglois).

In choosing the new cardinals, Pope Francis also wanted to highlight the pastoral experience.  Cyprien Lacroix, archbishop of Quebec, Canada had been for ten years missionary in Colombia; Orani Tempesta, archbishop of Rio de Janeiro, Brazil, is knows as “the bishop worker” for his tireless presence in parrishes and peripheries; Andrew Yeom Sou Jeong, archbishop of Seoul, hails from a family of Catholics for long time persecuted, and has been a parrish-priest for several years; also Philippe Nakellentuba Ouedraogo, archbishop of Ouagadougou, Burkina Faso, also has a long term experience as parrish priest; and Ricardo Ezzati Andrello, a salesian archbishop of Santiago in Chile, worked a lot in the pastoral and educative structures of the Salesians, and knows very well the problems of the peripheries.

Pope Francis seemingly also wanted to promote the idea that there are not “first class” or “second class” dioceses or posts in the Catholic Church, and this led to several surprises.

For example, the archbishops of important dioceses like Bruxelles, Venice, Turin, Bahia, Bangkok  will not be lead by a cardinal, while Pope Francis gave the red hat to Gualtiero Bassetti, Archbishop of Perugia and deputy president of the Italian bishops’ conference.

According to some observers, the choice would signal Pope Francis’ preference for the “ad personam cardinalate”, i.e. the creation of cardinals according to the will and the trust of the Pope, and not pursuant to the place where they are posted as archbishops.

In fact, the last archbishop of Perugia who got the red hat was Vincenzo Pecci, who was elected Pope Leo XIII in 1878.

The “ad personam cardinalate” approach would be also confirmed by the fact the Francesco Moraglia, Patriarch of Venice, may not get the red hat. There are two patriarchs in the Roman Catholic Church, that of Lisbon and that of Venice, and both of them already have the right to don red vestments. Thus, a non-cardinal patriarch is considered an exception. Moraglia, however, does not seem to be as close to the Pope’s heart as Bassetti.

Pope Francis seems anyway “rewarding” the people he trusts. Looking backward to his appointments, it is remarkable that the first Argentinean bishop he ordained was Victor Fernandez, rector of the Catholic University of Buenos Aires. Cardinal Jorge Mario Bergoglio struggled with the Congregation for Catholic Education to get Fernandez appointed as a rector. Not by accident, Pope Francis made major changes early-on to the Congregation for Catholic Education, deciding to change about half of its members. Nor is it accidental that Jean Louis Brugues, who had been secretary of the Congregation when Bergoglio argued with it, did not make the cut in the next consistory, even if he is now Prefect of the Vatican Apostolic Library, traditionally a cardinal-level post.

These are just educated guesses about the next consistory, reflecting the logic of the current state of affairs. However Pope Francis is governing on his own, as he always had, looking forward to appointing his men in key posts and not trusting the Curia that much. In fact, the Roman Curia was strongly criticized by cardinals in the pre-conclave meetings for its lack of transparency, poor communication and the Vatileaks scandal.

Now, there is a risk of a centralized government which appears to be too quick to consider every suggestion put forward by outsiders. The mushrooming of consultants and commissions (all of them with funds attached to them, and thus costly) has brought into the Vatican external agents who know little about the history and the peculiarities of the Holy See.

Pope Francis has been warned about this risk, and it seems that he has started to balance different perspectives. He also kept a balance with respect to the appointments of the new cardinals, naturally rewarding the people he trusts or he feels closer to, but at the same time giving to Latin America only what the Latin American Church may reasonably expect.

The consistory is just a step in a process of permanent reform. In fact, the consistory on February 22 will come after a general consistory of cardinals and following the meeting of the Council of Eight Cardinals appointed to advise the Pope about a Curia reform, which will meet February 17 to 18. Pope Francis will also take part in the Council of the Synod of Bishops, in a discussion left open in time, which is likely to become a permanent, informal council to keep the Church moving. “A Church that pulls away (from the world) is a sick Church,” Pope Francis has said. So the reform of attitudes must be permanently fed with discussions and ideas.

All the attention is focused on the Extraordinary Synod of Bishops on the family. A synod that will start in a context full of expectation about collegiality and a possible reform of the Doctrine of the Church, especially with respect to gay couples and the dispensing of sacraments to remarried divorcees. A new balance must be found between ultra-progressive views and the need for the Church to face new problems in a changing world. The discussion will be lively.

14 Responses to Pope Francis, the Church of the future starts now