Pope Francis, the Consistory as a test for the Conclave? 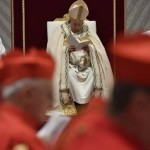 As far as we know, there will be no speeches, planned interventions, or reports in the extraordinary Consistory that Pope Francis has convened for 29 and 30 August. Instead, there will be a report by Bishop Marco Mellino, secretary of the Council of Cardinals, already submitted. It is the text based on a conference at the Pontifical Lateran University, and above all, it is the text based on Mellino’s criticized report at the last interdicasterial meeting.

The report is about the reform of the Curia and how it must evolve. After that, the cardinals should be organized into linguistic groups, as at the Synod, discuss among themselves, and then leave everything to the report of the rapporteurs, who will draw the conclusions.

We do not yet know if Pope Francis will introduce further reforms during the Consistory. However, there might be a modification of the norms for the vacant See, necessary because the Praedicate Evangelium, the Apostolic Constitution that governs the new Curia, has canceled some fundamental offices of the Vacant See, such as the Apostolic Camera.

But there is also talk of reforming the rules of the Conclave itself, particularly of the general congregations or the pre-conclave meetings. And among the hypotheses, it is said that the Pope wants to develop a synodal debate, thus organizing the cardinal electors into linguistic groups and leaving everything in the hands of the rapporteurs. It would be a very substantial reform of the general congregations, that would thus lose the characteristics they have had up until now.

If further reforms by the Pope are only the result of speculation, one can still think that the Consistory can be a pre-Conclave trial test for the Pope. Pope Francis has not convened a Consistory to allow cardinals to engage in discussions since 2015.

In 2015, there was talk of reform of the Curia, and there were open discussions and lectures. Now, none of this seems expected. If, on the one hand, the linguistic groups seem to allow ample freedom of speech, the rapporteurs of the groups will then sum up conclusions by selectively choosing what they want from the discussion, effectively directing the debate.

In addition, there is no discussion because the reform of the Curia is already done, and the cardinals are called to take note of it and receive the guidelines for applying the reform, both in the Vatican and in the episcopal Curia around the world.

In short, Pope Francis does not want to take risks, and is carrying out the reforms without opening any internal debate. When a debate exists, it is ultimately either not considered or marginalized.

Likely, the Pope is, first of all, afraid of having to deal with press campaigns, or spontaneous declarations by the cardinals, that oppose or question his reforms. The Pope probably saw a possibility that resistance was getting organized to oppose his reform plan. Hence, the secrecy, the sudden movements, the rapid dismissals from office, and even the sense that the Curia is where one works on a temporary basis and not where one serves.

Pope Francis believes that no Vatican center of power must be nurtured or structured.

However, it is a counterproductive approach. In not wanting other centers of power, Pope Francis legitimizes a center of power: that of the people around him or that he calls around him. And he uses this circle of power without trusting it too much because the decisions are and remain with the Pope.

Not only. In not wanting centers of power, the Pope does not allow anyone to work because everyone is unaware of what the Pope wants, and no task is well defined.

In this fragmentation, Pope Francis can genuinely reign. The decision to conceive working in the Vatican not as a high service but as a temporary assignment has two consequences. The first is that more and more people are being sent back to the diocese at the end of their terms, which can last up to ten years. The second is that no one will want to work in the Vatican, knowing that they can be suddenly fired or that, in any case, the work in the Curia is only temporary, without the possibility of having a lasting effect. Not a service, but a temporary servitude.

These are issues that would probably have been placed on the table, and they will be if there is a frank debate at the Consistory. But, even then, the fact that some people will be able to speak out and say what they think will allow the Pope alone to distinguish between friends and enemies, between those who support his reforms and those who are critical.

These are all the situations that make the next Consistory a significant experiment lab for the Conclave. Beyond the possible reforms of the Pope, in this Consistory we will see how much parrhesia, that is, frankness, will be possible and how much the Pope will want to direct the debate and personally choose the rapporteurs for the discussions.

If all this is applied to the vacant see, it would not even be a surprise if the Pope introduced the figure of the pope’s coadjutor, i.e., a cardinal elected pope who takes office only when the other dies.

Fantasy Church? Possibly and likely. The truth is that everyone is trying to decipher Pope Francis’ moves, and it isn’t easy. And, in this climate of uncertainty, the most imaginative hypotheses are nurtured. Maybe nothing will happen, everything will remain as before, and the Pope will only have made provocations without going into the merits. Everything remains to be seen.

3 Responses to Pope Francis, the Consistory as a test for the Conclave?