Pope Francis: The Path of Reforms Starts Again? The Crisis of European Values and the World Order without God

Pope Francis: The Criteria of the New Curia 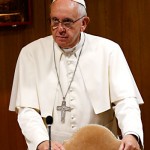 The appointment of Bishop Kevin Farrell of Dallas as Prefect of the new dicastery “Laity, Family and Life” took many by surprise. True, for a long time there has been a strong push from the US bishops to have a new influential representative in the Curia, after Msgr. Peter Bryan Wells, former Assessor at the Secretariat of State and actual go-to man for the English-speaking world in the Vatican, was appointed a nuncio in three south-African countries. It is also true that the name of the Bishop of Dallas was never mentioned by insiders.

His appointment was not the only surprise. Archbishop Vincenzo Paglia was President of the Pontifical Council for the Family. In that capacity, over the last months, he did everything he could to show that he was in-step with Pope Francis. Before the 2015 Synod, he organized a series of three closed-door meetings at the Pontifical Council for the Family with invited outside experts and theologians. The book produced by those meetings – “Famiglia e la Chiesa. Un legame indissolubile” – can be considered the most advanced position in the Curia over the discussion concerning sacramental communion for divorced and civilly remarried Catholics.

Among the participants in that meeting were many “progressive” theologians, like Eberhard Schockenhoff, a Jesuit who teaches theology at Freiburg University. Schockenhoff was also very active in the meeting between members of the French, German and Swiss bishops’ conferences that took place in May 2015 and was labeled as the “shadow synod,” because the discussions seemed to be aimed at orienting the Synod’s discussions.

This was not the only move by Archbishop Paglia to show himself as being allied with Pope Francis’s thought. When organizing the World Day of Families in Philadelphia in 2015, he stressed that “gay couples are welcome,” faithful to the principle that the Church does not exclude anyone. When it was already known that the Pope was going to establish the new dicastery “Laity, Family and Life,” he promoted the post-synodal apostolic exhortation Amoris Laetitia by organizing conferences for diplomats, in Rome and Geneva.

These maneuvers kept him involved in the dicastery he led, but with different roles. Last week Paglia was appointed President of the Pontifical Academy for Life and Chancellor of the Pontifical Institute John Paul II for Studies on Marriage and Family.

On the one hand, the statutes of the new dicastery – published June 4 – made clear that the work of the institute is to be linked to the new dicastery. On the other hand, because the institute is somehow linked to – though separate from – the Pontifical Lateran University, the Chancellor has always been the Pope’s Vicar for the Diocese of Rome, currently Cardinal Agostino Vallini.

First: is Pope Francis thinking about a reform of the Office of his Vicar for the Diocese of Rome? Might this reform be aimed at emptying the post of any “institutional” responsibility and loading it with more pastoral responsibilities?

This could be since the Pope has until now appointed a number of auxiliary bishops to the Rome diocese, so that now there are nine – a huge amount, even for such an important diocese. However, no reform seems in the offing. It is possible – almost certain – that the next Vicar will not be a cardinal, but just a bishop. There are hints that the Pope will choose Cardinal Vallini’s successor – he already passed the retirement age – among the circle of auxiliary bishops. The possible papal choice may be Angelo De Donatis: the Pope called on him to preach the Lenten Retreat to the Curia, and then wanted personally to ordain him a bishop.

Second question: will Archbishop Paglia have an impact on the discussions and the choice of professors of the John Paul II Institute. In an unusual chirograph, the Pope asked Paglia to follow the criterion of mercy. How is this to be implemented? How much of an impact can the Chancellor make?

Sequeri replaces Msgr. Livio Melina, who has been President of the Institute since 2006. Appointed for a four-year term and confirmed ad silentium in 2010 for a second four- year term, Msgr. Melina’s second term expired about one and half year ago. He will keep on teaching, bringing with him all of the philosophy and passion that takes its cues from Blessed Paul VI’s Humanae Vitae and St John Paul II’s theology of the body. Who knows what contribution Fr. Melina might have made to the two synods on the family had he been invited to take part? At least, Msgr. Granados represented the Institute at the 2015 Synod, whereas no professor from the Institute was invited to the 2014 Synod.

Sequeri’s profile is different from Melina’s. A teacher of fundamental theology and Rector of the Theological Faculty of Northern Italy, Sequeri is also (and above all) a musician who authored some of the most well-known religious-pop songs, often played during liturgies in Italian churches (Symbolum 77, Madre Io Vorrei, E Sono Solo un Uomo). His most known theological work is “The Reliable God,” in which he also asks that the Christian community rediscover itself around the Eucharist. After Pope Francis’s controversial conversation with the leftist journalist Eugenio Scalfari was published in La Repubblica, Sequeri granted an interview to insist that Pope Francis was not as progressive as everyone believed, but rather a conservative.

Sequeri is thus called to outline the Institute’s academic path. Certainly, he will take an approach based on beauty and aesthetics, and he will probably emphasize the need to communicate the beauty of the family rather than to underscore how good the Church’s doctrine is. Pope Francis likes this approach: he prefers bridge-builders to cultural warriors.

This is probably the reason that the Pope looks with suspicion on the North American world, even though he owes that world part of his election. So, why did he choose Bishop Kevin Farrell as a prefect?

There are many clues. Farrell was the Auxiliary Bishop under Cardinal Donald Wuerl, in the Archdiocese of Washington, and the latter hurried to deliver a statement to praise Pope Francis’s choice of Farrell. Cardinal Wuerl is considered very influential, and at the Synod he supported a line that put him on the opposite side of those who defended Catholic doctrine. To understand the Cardinal Wuerl’s impact, it is noteworthy that one of his protégés, Msgr. Steven Lopes, recently became the youngest bishop in the world and the first bishop to lead an Anglican ordinariate - and dialogue with Anglicans is crucial, as the Pope is preparing for a meeting with the Anglican primate, that will take place in Rome Oct. 5.

With the appointment of Farrell, Pope Francis also nodded to the US, and this is another clue. Immediately after the appointment was published, the Jesuit-run US magazine “America” emphasized that the appointment proved that Pope Francis has great esteem for the US Church (the appointment was labeled as a “clear sign of his high esteem for the church in the United States and for the people of this country that he came to know during his visit last year”). The description was too enthusiastic, and betrayed the need to reconcile the Pope with the American world, part of which is very enthusiastic about his approach while another part is experiencing a certain disaffection toward the pontiff, especially the conservative wing.

Obviously, this polarization of points-of-view does not allow one to understand all the nuances of this pontificate, which in fact cannot be set into a particular framework.

The criteria for the latest choices – the appointment to the dicastery “Laity, Family and Life” and to the offices and institutes related to it – included many elements: geopolitical (the need for a high-ranking American in the Curia); ideological vicinity (Crux recounted that Bishop Farrell was targeted by harsh critics for supporting Fr. Thomas Rosica when the latter denounced “a cesspool of hatred” in the Catholic blogosphere); Curial positioning (it was widely thought the Archbishop Paglia would be appointed Archpriest of Saint Mary Major Basilica, a decentralized but prestigious post: instead he got a post similar to his previous one, but with less responsibilities); balance of power (not by chance the chirograph concerning Paglia’s appointment was published, but not the one for Bishop Farrell); theological sensitivity (Sequeri was chosen because of his theological work based on encounter and beauty); institutional need (the publication of a further motu proprio to establish the dicastery is surprising, since its statues had already been published).

However, Pope Francis’s curial team is gradually being established, and there have been and will still be surprises. In general, he pays little attention to the curial machine, while his rationale – expressed in the exhortation Evangelii Gaudium – is that of handing over more responsibility to dioceses.

Viewed through these lenses, some of the most rumored curial moves seem to be unlikely. For example, the appointment of Cardinal Christoph Schoenborn, Archbishop of Vienna, as Prefect of the Congregation for the Doctrine of the Faith; or the appointment in a curial position for Archbishop Blase Cupich of Chicago or Cardinal Vincent Nichols, Archbishop of Westminster, as Cupich is considered a “shepherd with the smell of sheep” and Nichols the engine of the fight against human slavery, one of Pope Francis’s core diplomatic efforts – in this capacity, Cardinal Nichols is also the promoter of the Santa Marta Group.

In the meantime, the next consistory is very much awaited as a further opportunity to understand the checks and balances in play. Many are thinking it will take place next February, but no surprises are exclude. On Assumption Day, a wide known website, considered a semi-official source, suddenly published data about the current composition of the College of Cardinals. Some observers considered this sudden publication as a signal. After that, also well informed outlets spread the voice of a possible consistory, thus confirming the first impression.

Cardinal Antonio Rouco Varela, Emeritus Archbishop Madrid, will turn 80 on August 24, so he will not take part to the next conclave. From 25 August on, out of 211 living cardinals, there will be 111 electors – 9 less than the limit of 120 set by Blessed Paul VI. In February, the number of voting cardinals should go down to 105, with some 15 new slots available for the Pope. However, it is possible that he will create all the cardinals he needs to complete the roster at the end of the Jubilee of Mercy in November.

This conclusion might be interpreted as a sign to show what the Church of the future will look like. If this rationale proves correct, a new consistory can be announced at the end of August, or within the first two weeks of September.

Even in this case, everything is yet to be seen. Certainly, manoeuvers around the Pope to take posts and positions began a long time ago. There is a big ongoing transition that does not only involve the new curial dicasteries, but also the vacant dioceses. One of the most awaited appointments is that of the new Archbishop of Krakow, as Cardinal Dziwisz will resign due to age. Many observers bet that Archbishop Stanislaw Rylko, President of the Pontifical Council for the Laity, will be chosen for the post: his dicastery will be absorbed, but he still has not been given a new post.

In the meantime, eyes are set to the next development, the establishment of the new dicastery “Charity, Justice and Peace” that should take place on September 1. This will provide another piece of the reform that Pope Francis has in mind.