Pope Francis, the Papacy of the media and the real Papacy Pope Francis, Charity in Truth or Truth in Charity?

Pope Francis, the diplomacy of freedom 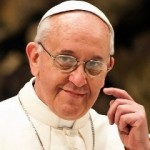 Pope Francis gave an important speech this week to the joint committe of the Council for European Bishops’ Conferences (CCEE) and to the Conference of European Churches (CEC). In the speech, the Pope asked Christians not to be divided on ethical issues, and above all he said his categorical no to legislation restricting religious freedom.

Before the 14 representatives of the Joint Committee, Pope Francis explicitly mentioned the challenge of legislation that, “in the name of a badly interpreted principle of tolerance,” in the end forbids citizens to express freely and to practice peacefully their religious beliefs.”

In some ways these words represent a turning point for this pontificate. Step by step, Pope Francis is setting aside his earlier, more conciliatory attitude, and replacing it with precise and strong positions. If the Pope initially seemed to have opted for the line that the Church has no wish to shape the world, today’s stances show his will to speak with clarity. These words lead us to conclude that “Phase 2” of this pontificate has begun, the phase of the commitment and clarity. The issue of religious freedom provided a first example.

The CCEE and CEC joint committee zeroed in on freedom during their meeting in Rome. The topic of the gathering was “Freedom and Liberties: a Christian approach.” At the end of the meeting, representatives had the opportunity to sign a joint appeal for Europe. In the joint message released May 8, the European Christian Churches describe freedom as a tool to find the courage to fight violence and oppression against women that is perpetrates in the name of religion; to save “the migrants of the Mediterranean Sea;” and to end prejudices against the Rom. But the message also asks for the freedom to deter human trafficking, a central issue of this pontificate; and the message also urges a sharing of reflections on “creation as a sacred gift” in view of the December 2015 Paris Conference on climate change.

The joint message was loaded with topics, but stood out as different among messages of this pontificate: it does not contain the usual “formulas” of Pope Francis, for example, it never mentions the existential peripheries or mercy. It goes beyond them, fixes its target and remains detached from the predictable narrative of this Pope. This is also a sign that the “hidden Vatican” – but in this case, we should widen the perspective and speak about a “Hidden Church” – carries on with its job, without hesitation and without being conditioned by Pope Francis’ communication model.

In fact, Pope Francis has moved away from the earlier communication model of his pontificate. Some examples: he dedicated three consecutive general audiences to family, speaking out loud against gender ideology. Moreover, thanks to his political instinct he came around to understanding the importance of the Holy See as an institution. Lastly, he has probably abandoned the revolutionary wish to change everything in short time – a wish that was his, but was above all that of his electors. Finally, there is the May 6 speech to the representatives of European Churches.

As suggested above, this speech may represent a turning point, as it reportedly was really Pope Francis who wrote it. Generally when the Pope gives a speech, the dicastery or body to whom the speech will be directed sends him some general notes that allow him to understand what the problems are and what the other party hopes he will say in the speech. Then, the Secretariat of State prepares the speech, the Pope reviews it and eventually adds a personal touch until the speech is ready to go.

According to a source who is generally involved in the process of drafting papal speeches the first draft of the speech did not come from the CCEE. Everything was done internally, following Pope Francis’ instructions.

As already mentioned, the speech dealt with important issues. Beyond the notion of religious freedom, Pope Francis also touched on ecumenism and underscored that “division among Christians damages the very holy cause of the preaching of the Gospel to every creature.” The Pope insisted that this damage is evident “when Churches and ecclesiastical communities in Europe present different visions about important anthropological an ethical issues.”

Earlier on in this pontificate, it seemed that the idea of pursuing an ecumenical alliance around ethical issues had been abandoned in Pope Francis’ speeches. All too hurriedly the policy of pursuing non-negotiable values with ecumenical partners was ruled out and was replaced by more attention to social issues. Even in the United States, it was widely thought that the struggle for religious freedom had come to an end – as if it was a concern only for conservatives who were out of step with the new era of Pope Francis.

But in fact, in these recent speeches the new Pope Francis takes on the same, old battles: he just does so with a different tone, in keeping with his character.

It is yet to be determined exactly when Phase 2 of this pontificate began. However, it seems ever clearer that the hidden Vatican is winning Pope Francis’ heart over. This gentle counter-revolution needs to be documented, because it shows a change that perhaps every pontificate has experienced. It can only be said of a few men that they were “born a Pope”; all the other Popes need time to understand the Curia machine and its machinations, as well as the machination of those who, from outside the Curia, are struggling to dismantle everything.

But there is no revolution in this Vatican, and a single anecdote can confirm this. The only new body to arise out of the reform was the Secretariat for the Economy, 85% of whose current employees were taken from other economic bodies of the Holy See. Commenting on this fact, a source involved in their selection stated that “(these people) were good and skilled: why should we get rid of them?”

In fact, all along Vatican employees have carried on their work with the usual rhythm, with no jolts, thus keeping the curial structure functioning.

Pope Francis, on the other hand, has understood that he needs the Curia to reform the Curia. So, why did he mention the 15 maladies when before Christmas he last met the members of the Curia? Everyone interpreted the speech as an accusation. But the interpretation of the speech shows another side of Bergoglio’s character: he never makes precise accusations, he speaks in general terms. Pope Francis said those words, but if he had had no esteem of the curial chiefs, he would have fired them.

The risk of overinterpreting the Pope is ever present. But there is also another risk, that of not taking into consideration his gestures. In the end, just as there is a hidden Vatican, there is the possibility of a hidden Magisterium on important topics – hidden because the media will continue to ignore the Pope’s voice when he speaks about it.

5 Responses to Pope Francis, the diplomacy of freedom