Synod 2018, will the Synod fathers be able to place the Eucharist at the center? Pope Francis, an ever open Synod or a walking Council?

Pope Francis, the era of division 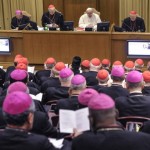 The coming week of the Synod of Bishops will be totally dedicated to the drafting of the final document and the Pope’s message to the youth. It may be that Pope Francis is now facing more divisions than ever.

It seems paradoxical, as the discussion at the Synod of bishops on youth seems to be going smoothly. Beyond certain pressure for the redefinition of the notion of family, the debate focused in the first two weeks on terminology. The criticism of the working document, considered excessively sociological in its terms, has not in the end changed too much the setting, still based on the three parts “see, judge and act”.

The expected discussions on Humanae Vitae did not take place, and the notion of conscience was discussed and in the end most of the Synod’s father concluded that it must be understood as “awareness” rather than conscience. Everyone agreed that more theology was needed and that doctrine had to be explained in a clearer way.

The crucial moment is now. Minor Circles (the small groups of bishops who meet organized by language to discuss the document) talked about how to act, that is how to propose valid pastoral practice, and the final document to be drafted this week is called to include the suggestions.

In general, when a concrete approach is applied without considering a wider view, the idea is at risk. In Evangelii Gaudium Pope Francis stressed that “realities are greater than ideas”, and that apostolic exhortation is a sort of guideline to the Pontificate.

In that sentence there is the critical issue: if realities are greater than ideas, if there is not a greater idea to frame everything, everything can then be placed under discussion.

This is a hot topic, and this is the reason why discussions at the Synod might create further division. And it would do so while divisions are very strong, even outside the Synod.

For years, there was talk of a “pragmatic schism” within the Catholic Church. Already before the Second Vatican Council, in 1958, a certain Joseph Ratzinger published the paper “The new Pagans and the Church,” underscoring that many proclaimed themselves Christians, but lived like Pagans.

This was also a topic of discussion during the Second Vatican Council. In the end, filled with missionary zeal and the will to read the signs of the times, the Second Vatican council sought to make the faith incarnated again in daily life. This challenge was launched before the 1968 movement and the total moral transition that was going to follow after that.

Why did this topic get lost? In general, the issue always stayed below the radar, absorbed by the typically political language that emerged in the post-Council discussion. Not by chance, Benedict XVI had spoken about a real Council and a Council of the media.

Always more, the Church has been considered a political animal, described according to political categories. Always more, the real meaning of the Church’s actions was lost. Does anyone speak of human redemption? It means that he is a conservative, or at least naive. Does anyone speak of integral human development? Then you are progressive, but only if the development in question does not put God at the center.

These are just few examples of a discussion which result was not just that of not describing the Church for what she is – a community of believers centered on the Eucharist – but above all of creating a different image of the Church that, to many, became truth.

The submerged schism does not regard anymore only the doctrinal situations and religious practice not reflected in life. It does not regard anymore the issues of contraception or moral themes in general. The submerged schism has now become a pragmatic schism, which does not take among the faithful, but that tends to separate the faithful from the Church itself.

In a recent interview, Cardinal Angelo Bagnasco, president of the Council of the European Bishops’ Conferences, underlined that “there is the risk to consider faith as a little ideology, and States and society can perceive faith as a civil religion, as a deposit of values that are useful to States and society. This is instrumentalization”.

To Cardinal Angelo Bagnasco, even people run the same risk, since “each of us can step by step get to conceive faith as an aseptic belief. That is: we believe in Jesus Christ’s divinity, even in the mystery of Easter. We believe in the Church, in the Sacraments, in the World of God. However, this belief stays outside of our heart and of our concrete life”.

These are the basis of the Church crisis, these are the basis of this pragmatic schism. Archbishop Charles J. Chaput of Philadelphia, in an interview with the Polish magazine Miesięcznik Wpis (wydawnictwo Biały Kruk), looked back to the tragedies of the 20th century and underscored that “the idea of a loving God seems implausible today for many people, not because of something wicked God has done, but because of the evil we ourselves have done without God stopping us.”

It is interesting that, during the last week of the Synod, some steps to return to the previous regulations of the Synod are being made. And this after there had been decisions that made the Synod of Bishops more “political,” like the 2014 decision to disclose the votes of the propositions in the final document, even when these did not get to the 2/3 Synod consensus, and the notion of a moral unanimity to approve the documents.

Paolo Ruffini, prefect of the Dicastery for Communication, last week clarified positions that had to be clarified. It turned out that the final document of the Synod will not be voted in its entirety, but “paragraph by paragraph,” as it used to be the practice. It was also the practice not to disclose the names of the members of the Minor Circles, in order to “favor communion” and “avoid a climate of contraposition.”

Perhaps, step by step, the old rules established in the course of the years will return. These procedures also implied total transparency about information regarding the Synod, with the exception of open discussions and on controversial issues, which were left as internal to the Synod.

These steps back and adjustments show, in the end, that there is fire under the ashes of a discussion that is seemingly smooth and based on a few simple and pastoral issues. Under this discussion, there is the ghost of a sort of coup effected by the new regulations of the Synod that, in the end, centralized the power on the General Secretariat of the Synod.

It seems to be providential that, while the Church is living one of the moments of major disincarnation of faith, the Orthodox Church is enduring in the East a war between the Ecumenical Patriarchate of Constantinople and the Moscow Patriarchate: the first has opened the procedure to grant autonomy to a unique autocephalous Ukrainian Orthodox Church, while the Patriarchate of Moscow considers Ukraine its liturgical territory.

This war is waged through documents, meetings, announcements of the breaking of the communion and of reciprocal prayer, while other orthodox patriarchates decide where to stand. It is evident that the issue at stake is that of a Church linked to the territory and to political power. A Church that, beyond the depth of her liturgy, lives in a political way, and fights for territorial supremacies that have no reasons to be.

This is what happens in the Catholic Church, when every theological discussion is polarized and made political. The Catholic Church stays alive only because there is only one recognized chief, the Pope, and stays universal: her territorial expressions, the local Churches, are not other structures within the Church, but part of the Church.

It is not by chance that Archbishop Sviatoslav Shevchuk, head of the Greek Catholic Ukrainian Church, admonished not to use ecumenism as a diplomatic tool. Major Archbishop Shevchuk, at the Synod, noted that Ukrainian youth do not consider “young a Church that does geopolitics,” but they long for a “Mother Church, able to teach.”

So, while the Catholic Church is shaken by the abuse scandals and allegations that get to improperly asking the Pope to resign; while it is always more evident that this submerged schism in the end is nothing more than the continuation of an old discussion that was born perhaps already with the Protestant Reformation; while all of these things are happening; the third crucial week of the Synod begins.

Which will be the Synod fathers’ decisions? How will these choices impact the Church? Will they be able to ask for a Church Mother and Teacher, and look for a faith incarnated in life? Or, in the name of the pastoral practice, will they be eager to make informal concessions on doctrine?