Pope Francis, the issue of the open processes Benedict XVI, seven years after 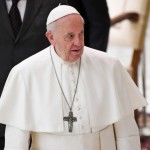 The news that Pope Francis chose, as his new personal secretary, the Uruguayan priest Gonzalo Aemilius is particularly surprising both for the announcement and for timeliness.

The Holy See Press Office had never given before news of who was the Pope’s secretary, since the position is not even included in the Roman Curia organizational chart.

The fact that the name of the new secretary was communicated right after the Mass of the first Sunday of the Word of God came under scrutiny, as the announcement might have overshadowed Pope Francis’ words.

Indeed, the appointment of a new secretary is particularly interesting to understand where the pontificate is going. Many thought that the Pope was not going to look for another secretary after the resignation of Msgr. Fabian Pedacchio, who went back full time to his previous position at the Congregation of Bishops.

Those who know the Pope note that the Pope has two schedules, a personal and a public one. Nobody can see the personal scheduling agenda. This means that the personal secretary has a limited impact in Pope Francis’ life, and has a very marginal role.

Monsignor Pedacchio, for example, did not even take part in Pope Francis’ international trips. The second secretary, monsignor Iohannis Lahzi Gaid, became mostly the Pope’s go-to person for the relations with the Arab World. Msgr. Gaid is also a member of the Committee for the Implementation of the Declaration on Human Fraternity Pope Francis signed in Abu Dhabi, along with the Grand Imam of al Azhar on Feb. 4, 2019.

Fr. Gonzalo Aemilius’ profile is different from that of the other secretaries. Media reports particularly emphasized his commitment to the education of street children. Just a few reported on the awards Fr. Aemilius got from the Rotary Club. These awards are also an acknowledgment of Fr. Aemilius’ high educational background: he hails from an agnostic and wealthy family of Jewish origins, and he converted when he was 16.

A glance on YouTube shows that Fr. Aemilius is very much at ease in front of the cameras, and he is a very skilled talker. Good-looking, cultivated, he earned, by the way, Pope Francis’ trust because of his work with the poor. Fr. Aemilius’ friendship with Pope Francis became public the very day of Pope Francis’ election. By  the end of that week, Fr. Aemilius was in Rome to greet his friend, now Pontiff.

In some ways, Fr. Aemilius is to Pope Francis what Archbishop Georg Gaenswein was to Benedict XVI. Even Archbishop Gaenswein is good looking, cultivated, and has a natural charisma in front of the cameras.

Fr. Aemilius might carry on his activity discreetly, given the role that the Papal secretary has had until now. However, his coming to Rome was planned because he had recently served as a sort of spiritual assistant for the Santa Marta Dispensary, the Vatican building which provides care and nursing to the poor.

The appointment of the new Secretary completes Pope Francis’ “family” in a particularly delicate moment.

The Council of Cardinals will meet again from Feb. 17th through the 19th, to finally shape to the Curia reform – although Pope Francis is already putting that into practice.

The narrative around Pope Francis often speaks about resistance against his reforms. However, the references to resistance seem to be part of preemptive tactics by those who have a hidden agenda for Pope Francis and see it under threat. Rather than resistance, it was mostly perplexity. Those who expressed their perplexities, by the way, are those who proved to be more faithful to the Holy See.

Pope Francis is approaching the seventh anniversary of his pontificate with a renewed Vatican and a Curia membership that is going to change – 5 out of 9 heads of dicasteries reached, or are going to reach, the retirement age. On some issues, it seems Pope Francis took a step back. Only time will tell.

The first hurdle will come in mid-February, when the publication of the post- Panamazonian Synod exhortation might be out. It is expected it will be an ambiguous text with a robust political impact, as if it were a second encyclical on ecology by Pope Francis. The publication will generate an active discussion.

In spring, the Holy See will submit its financial transparency system report to the Council of Europe’s Moneyval. The MONEYVAL report will show the institutional issues that led to the suspension of the Vatican Financial Intelligence Authority director Tommaso Di Ruzza. Di Ruzza had great international recognition, as did René Bruelhart, the president of the authority. The international observer sees with concern the fact that neither Di Ruzza nor Bruelhart will be working on the dossiers.

At around mid-year, the final draft of the Curia reform should come out. It will be then Pope Francis’ turn: will he be able to balance all the powers? And how does he think it will work?

The Vatican communications reform is meanwhile reportedly working on the project of a so-called Vatican News Agency, to go along with the already existing radio, Osservatore Romano and Vatican News. Will this new agency be functionally better able to deliver the news on the Holy See?

All of these issues are open and must be put in context. In the end, the presence of a new personal secretary who is also liked by the Latin American elite will allow to better manage pressure.

In the end, it is not just about a sign that the Pope is changing lives. The Pope has changed, and now he figured out that he needs, at least nominally, a team he can trust. This team may be well-defined and able to serve the institution, or it may change the institution.