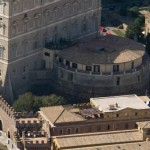 The appointment of Giuseppe Schlitzer as director of the Vatican Financial Intelligence Authority has inaugurated the fourth season of the Vatican path toward financial transparency. Schlitzer filled the last vacant position in the authority’s top positions. The Authority was shocked last October by the suspension of its director, Tommaso Di Ruzza.

Di Ruzza’s mandate expired on Jan. 20, 2020. His suspension occurred following an investigation of the Vatican prosecutor on the purchase of a luxury apartment in London by the Vatican Secretariat of State. The investigation led to searches and seizures in the Secretariat of State and the Financial Intelligence Authority (also know by its Italian acronym, AIF) and to the suspension of five Vatican officials, included Di Ruzza.

When the investigation broke, it was immediately evident that the real issue was not the investment in the London real estate. It was instead an institutional problem. More precisely, it was the bitter fruit of the debate that marked all the Vatican path toward financial transparency.

The searches and seizures at the AIF jeopardized the autonomy of the authority, which is an intelligence body. The international reaction was hard to manage. Among the papers seized, there were also the reports exchanged in the Egmont Group secure network. The Egmont Group gathers financial intelligence units from about 150 countries in the world. The reports were intelligence reports, and they could not be subject to any judicial investigation. They were seized in the name of the Holy See sovereignty. Paradoxically, by doing so, the Holy See put its sovereignty in a hard situation.

The Holy See is a State and has to meet international obligations. The suspension of the director of the Vatican financial intelligence unit – a suspension that took place without direct charges against him – and the seizure of the intelligence papers questioned the Holy See’s reliability. How credible could be a State that showed no respect for its intelligence authority?

The attack on the AIF was part of a broader scenario. The debate arose when the Holy See first drafted a law on financial transparency. The question was: what is the rationale the Holy See should follow? Should the Holy See take Italy as a model, following the criteria of a privileged bilateral relation? Or was the Holy See called to tailor a Vatican model for financial transparency, detached from the Italian mindset? Should Italy be considered, with respect to relations with the Holy See, just one country among other countries?

In the beginning, the Holy See took the first path. The first AIF’s board of directors was comprised of Italians only, almost all of them coming from the Bank of Italy. The first Vatican anti-money laundering law was drafted on the basis of the Italian anti-money laundering law. This method had mediocre results. The Moneyval inspectors shed light on some gaps in the system. The system did not fully meet international standards.

This was the first season of the Vatican path toward financial transparency. After the Moneyval findings, a second season began. The perspective changed. The Vatican anti-money laundering law was first tweaked and then substantially re-written, to build up a sustainable system that fits the Holy See particularities. This new approach was detached from any privileged relation. It is easy to understand that Italians did not like it. The path toward the first Moneyval evaluation in 2012 was characterized by a series of leaks on the discussion from judicial and financial sources in Italy. All of these leaks were part of a campaign to discredit the new season.

In Italy, the Holy See’s path was viewed with suspicion. Outside of Italy, the Holy See garnered international credit. Step by step, the Holy See became a credible partner, and even Italy had to take it into account. In the end, the AIF was able to sign memoranda of understanding both with the Bank of Italy and with the Italian Financial Intelligence Unit.

Even the staff that built up the system was chosen while observing the Holy See’s particularities. René Bruelhart got to be the president of the Authority. He had a very high international profile, and joined the Vatican step by step: at first as a special advisor, then as a director, and then as president.

He worked with Di Ruzza by his side, who represented the Holy See interests. Di Ruzza joined the AIF in 2011, coming from the Pontifical Council for Justice and Peace. He was a man of the Holy See, with no other interest than the Holy See’s and whose career was built within the Holy See. If Bruelhart was the international actor, Di Ruzza was the guarantor that the Holy See’s interests were going to be sought always and no matter what.

Di Ruzza’s direction was the peak of the third season of the Vatican financial transparency. In essence, the AIF got new statutes and was admitted to the Egmont Group, the Holy See entered the Single Euro Payment Area and got a Vatican IBAN, the international cooperation was strengthened, and Moneyval reports were positive.

After Di Ruzza’s suspension, however, there were also calls for the Holy See to return to the origins. Bruelhart was not renewed at the helm of the Authority. He was replaced by Carmelo Barbagallo, coming from the Bank of Italy.

Schlitzer is also an external expert. His deputy is Federico Antellino Russo, who joined the AIF in 2015 and followed in many ways the path of Di Ruzza’s direction. So, it seems that the Holy See does not want to do away with all the excellent work done.

The investigation on the London real estate purchase was, in the end, the perfect crime to justify getting back to the Italian mentality, and thus to a privileged bilateral relation. All the signs point there. Barbagallo’s appointment as president, but also the appointment of Giuseppe Pignatone as president of the Vatican Tribunal, have brought within the Vatican people who have always worked in Italian institutions, and that bear the mentality of the Italian institutions.

It must be seen now if Schlitzer will carry forward the international approach. In the end, all the Vatican financial scandals have been Italian. The famous IOR / Ambrosiano scandal was an Italian scandal – documents showed that the IOR was a victim in the situation. The three Vatileaks seasons all originated in Italy. This last so-called Vatican financial scandal is no exception.

At the moment, the only winner seems to be the Vatican Tribunal. Criticized by Moneyval for lack of follow up to suspicious transactions, the Tribunal has always responded that Vatican justice moves at a different pace of time.

The next Moneyval report will be on the effectiveness of the judicial system. This means that the report will focus on how the Tribunal is following the recommendations. The Tribunal gained precious time because of the COVID 19 outbreak, but, once things return to normal, the report will reveal how Moneyval feels about it.

De facto, at the moment the situation seems to be one of being at ground zero, all prior work set aside. The fourth season has just started, and it is still soon to assess whether the Holy See is moving forward or backwards.