Pope Francis, what is the mission of the Church? Pope Francis and the challenge of unity 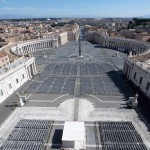 Perhaps the motu proprio with which Pope Francis will regulate procurements at the Vatican will be published today. This law was also discussed at the meeting the Pope had with the heads of the Vatican dicasteries on May 3. During the meeting, it was also pointed out that the new law could impact the way dicasteries have been working so far. Pope Francis, however, is determined to go on. He aims at breaking the corruption chain within the Curia.

What kind of corruption are we talking about? The first “Vatileaks” began with a leaked note from Archbishop Carlo Maria Viganò, then general secretary of the governorate, who complained about excessive expenses for the Christmas tree and the Nativity scene in St. Peter’s Square. Archbishop Viganò also called for a transparent procurement regime within the Vatican to allow a cut in general expenses.

The note was used to create the narrative of corruption within the Vatican. This narrative had earlier led to Vatileaks 2 and Vatileaks 3. Behind the depiction of actual problems, there has always been a hidden desire to paint the Holy See as a place where there is widespread corruption.

In recent times, Pope Francis has been very focused on trying to eradicate corruption in the Vatican. The motu proprio on contracts is just one of the Pope’s latest moves.

In October, Pope Francis authorized searches at the Financial Intelligence Authority’s offices and the Secretariat of State. The investigation led to five suspensions.

Pope Francis has always proclaimed the principle of the presumption of innocence. The fact is that, without formal charges yet, five individuals have already been punished in some way: Tommaso Di Ruzza, director of the Financial Intelligence Authority, was not renewed in his position; Vincenzo Mauriello and Fabrizio Tirabassi, officials of the Vatican Secretariat of State, will remain suspended until July; Caterina Sansone, an official of the Secretariat of State, was assigned to another position; Monsignor Mauro Carlino, director of the Information Office of the Vatican Secretariat of State, was sent back to his home diocese.

Despite the presumption of innocence and even though a trial has not yet been celebrated, five people found themselves without a job.

Pope Francis also wanted to open the Vatican judicial year personally, and on this occasion, he stressed that it is good that the episodes of corruption had been addressed from within. What will happen if the trial then leads to the acquittal of all these people? Or if even just one of them is not tried because the investigations leads to nothing?

Earlier, there was a case was against Paolo Cipriani and Massimo Tulli, former director and general manager of the Institute for Religious Works, the so-called Vatican bank. These were found guilty of “mismanagement,” and must repay the institute 47 million euros. The appeal process in the Vatican is ongoing. However, there is a strong impression that Cipriani and Tulli paid for errors not of their own making, because no investment by the IOR could have been made without the authorization of superiors. However, their trial and guilty verdict reinforce the narrative of “transparency” launched in the Holy See, and this narrative seems untouchable in the Vatican.

Still, this narrative should at least raise some doubts. Looking at the IOR figures, we find out that it reached its maximum profits in 2012, with the old management. Afterwards, the profits fell steadily, also due to the hiring of expensive internal consultants.

Reading the MONEYVAL report of 2012, we find out that the Vatican was already working on setting up a financial system adherent to international standards and consistent with the mission of the Church.

Furthermore, we can look at the numbers of the Financial Information Authority reports, which are public. It is easy to note that international cooperation has grown over time. It was a sign that the Holy See’s financial system was working, and that it enjoyed international credibility.

The narrative does not consider these data, as if everything good done before is null. So, the narrative feeds the impression that everything has always been covered by corruption, or, at least, connivance.

Common sense would be enough to make it clear that this cannot be the case, simply because reality has many nuances. The new motu proprio on contracts falls into this narrative and will be interpreted within this narrative.

The reforms, however, seem to continue to go back and forth. Last week, for example, there was the news that the Data Processing Center of the Administration of the Patrimony of the Apostolic See had been transferred to the Secretariat for Economic Affairs. Competence over the center, which tracks all financial transactions, has passed from one institution to another in recent years. The impression left is that there is no precise design for reform. The reform is instead proceeding by trials and errors.

Above all, the adjustments seem to be merely practical responses to pragmatic issues, while the overall vision of the Holy See and the Vatican City State has been lost. They are particular realities, which cannot be compared to that of any other institutions. Instead, there is an ongoing attempt to adapt the Holy See to secular institutions, with the justification of trying to avoid corruption.

We will see what the results will be at the end of the reforms and processes. For now, there seems to be more questions than answers. However, the process is ongoing.