Pope Francis: Beyond the Submerged Schism Pope Francis and the Order of Malta: A Key to Understanding this Pontificate? 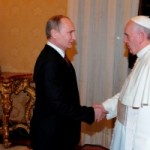 Moscow or Beijing? While nothing is yet known about Pope Francis’s 2017 trips – except for the already scheduled trip to Fatima for the 100th anniversary of the apparitions – this question is not about the near future, but the distant future of possible papal trips. And it deals with those two Eastern prizes that popes could never take, and that Pope Francis would love to somehow to reach. Looking attentively to certain events that took place during the current Week of Prayer for the Unity of Christians, one might assume that Moscow is the first goal. At least at the moment.

Certainly, a possible papal trip to Moscow would also have to take into account the opinion of the more “orthodox” world behind the Russian Patriarchate, which would never accept a Pope on Russian soil and that has profoundly criticized Patriarch Kirill for the meeting with Pope Francis in Cuba. In fact, Metropolitan Hilarion, the man who is responsible for the external relationships of the Moscow Patriarchate, clearly stressed in an interview granted to the Italian Bishops Conference’s news agency, SIR, that a papal trip to Moscow is not on the agenda.

On the other hand, attempts to ease the situation and pave the way for improved relations (and eventually for a papal trip) are evident. These attempts look to the East, and particularly to the Moscow Patriarchate, the largest Orthodox Church with 250 million faithful. If the meeting in Cuba seems at this moment to be an isolated event, there are apparent tight relations behind the curtains.

This can be glimpsed between the lines of an article written by Fr. Hyacinthe Destivelle, who is responsible for Eastern relations at the Pontifical Council for the Promotion of Christian Unity, and who was among the organizers of the Havana meeting. The article appeared in “L’Osservatore Romano” on January 19.

In a lateral way, Fr. Destivelle sought to soften the polemics raised after the issuance of the joint declaration between Pope Francis and Patriarch Kirill. In the article, Destivelle reiterated that the declaration “is a pastoral one,” and that “it would be wrong to interpret the text through geopolitical lenses;” nor “would it be correct to attribute to the words used an excessively theological impact”, as the meeting “is not framed by the theological dialogue that is the competence of the International Roman Catholic -Orthodox Dialogue”, but it is framed instead “by the dialogue of charity, and more precisely by pastoral ecumenism.”

Fr. Destivelle also noted that the document raised criticisms both on the Orthodox and Catholic sides, and that in particular “in the Ukraine, the Greek Catholic Church also expressed strong reservations, focused especially on some passages of the joint declaration.” He concluded that “as with any other historical event, time is needed in order that the Havana meeting and the declaration will bear fruit.”

Pope Francis is looking at Moscow with the awareness that any Orthodox resistance, no matter how tenacious, could be swept away at will by Vladimir Putin who is President of Russia and also very close to Patriarch Kirill. Despite Fr. Destivelle’s insistence that the geopolitical criterion was not important, in the end it was evident that geopolitical issues were indeed important for the Havana meeting.

With this pastoral ecumenism, the theological debate is somehow confined to a ghetto, in favor of common initiatives that are not aimed at creating a single, undivided Church, but instead at a community of Christians with mutual interests. It is something the Patriarchate of Moscow can accept, along with the Orthodox Patriarchate of Georgia, though the latter is one of the most wary of all the Orthodox Churches in the field of ecumenism. The Georgian Orthodox delegation did not sign the recent document of the mixed theological commission on synodality, and hence distanced itself from the role of the Church of Rome as outlined in the document. For this kind of step, ecumenism in a theological sense is almost impossible, or at least unreachable at the moment.

Unreachable in theological terms, but not in pragmatic terms. In particular, the Patriarchate of Moscow and the Holy See found a common ground in Syria, a place where – as Metropolitan Hilarion said to SIR – people suffer. But it is also a place where Russia is decisively at work: President Putin was in the Vatican twice to meet Pope Francis, and both of the meetings zeroed in on the Syrian issue.

Can we say then that Moscow is growing closer? This is certainly a goal, as can be glimpsed by one fact: Andrea Tornielli, a journalist considered among Pope Francis’s friends, will present his recently released book on Pope Francis’s trips (including an interview with the Pope) together with Aleksandr Avdeyev, Russian Ambassador to the Holy See.

Other signals must be taken into account, and one of them is represented by transfers of papal diplomats.

Shortly before the World Youth Day at Krakow, Archbishop Celestino Migliore, Nuncio to Poland, was named Apostolic Nuncio to Russia – and Jan. 21 he got the additional appointment as nuncio to Uzbekistan. Prescinding from the awkwardness surrounding the timing of the decision – it was almost thought that he was being punished since he was sent away from Poland and therefore away the WYD which he helped to organized – Archbishop Migliore is one of the most skilled and experienced Vatican diplomats, and is now in a key position in Russia.

Archbishop Migliore’s predecessor in Moscow, Archbishop Ivan Jurkovic, was sent to Geneva, as the Holy See’s Permanent Observer to the UN there. Hence, he was sent to the post “where the UN headquarters’ decisions are prepared”, to quote a widespread saying among Vatican diplomats. So he is in a key position – many initiatives for Syria and against the persecution of Christians were handled in Geneva – and at the same time he knows very well the Russian world and its sensitivities.

Before Archbishop Jurkovic, Archbishop Antonio Mennini was the papal representative to Moscow, prior to his transfer to the London nunciature. Archbishop Mennini will be now transferred to the Secretariat of State to work in the Second Section, which is the “foreign office.”

All of these signals should be interpreted, though there are many lenses through which to see them. In the end they are also an anticipation of larger ones. It must be remembered that Pope Benedict XVI’s last appointments of nuncios, members and consultors of congregations and pontifical councils took place in 2012, and all of them will expire this year. Hence, it will be from this year that the Curia and the Vatican diplomatic corps will finally take on Pope Francis’s design.

Pope Francis’s diplomatic gaze seems to be set to the East, to Moscow, though the Pope still thinks strongly about going to China – and he reiterated it in his Jan. 22 interview to the Spanish newspaper El Pais. The Jesuit Pope is fascinated by China both because of the extraordinary story of the Jesuit missionary, Matteo Ricci, and because of the call to the East that is somehow part of the Society of Jesus’ mission.

Since Pope Benedict XVI’s 2007 letter to the Catholics in China, there were several appointments of bishops with the twofold approval of the Holy See and the Chinese government, but this was never taken for granted. Despite the division between the clandestine Church, faithful to Rome, and the Patriotic Church, linked to the Chinese government, the Holy See always stresses that “in China there is only one Church.” Despite that, Holy See officials are conscious that within the Patriotic Church’s ranks are bishops who are excommunicated, because they were ordained without papal consent.

Agreement seemed close. Cardinal John Hon of Hong Kong defended it while his predecessor, Cardinal Joseph Zen, attacked it, asking China to respect religious freedom first. In the meantime, the diplomatic dialogue went on; the Holy See left its nunciature in Taiwan bereft of any top-ranking official (the previous chargé d’affairs, Msgr. Paul Fitzpatrick Russell, was promoted Nuncio to Turkey) as a sign of a diplomatic thaw toward China – the papal nunciature in Taipei has always been a hurdle in the Holy See’s diplomatic relations with Beijing.

The agreement remained stalled, because – a Vatican source says –the Vatican’s concession of government involvement in the choice of bishops was badly formulated and it needed to be refined in order to preserve the Church’s freedom. At the moment the agreement is too divisive to be quickly finalized.

This is the reason why Beijing has become a more difficult destination for the Pope, despite President Xi Jinping’s unprecedented approaches to the Vatican and the “Red Dragon” (all political) will to be open to the Vatican. And this is how Moscow has once again become one of the main goals for Vatican diplomacy.

Update and corrections, Jan. 23: Right after the publication of this post, I have been explained that nuncios have no term for their office. This means that the sentence should correctly go as: “It must be remembered that Pope Benedict XVI’s last appointments of members and consultors of congregations and pontifical councils took place in 2012, and all of them will expire this year. Hence, it will be from this year that the Curia will finally take shape on Pope Francis’s design”.

I have also been informed that nunciature to China is not vacant at the moment, and that there is already a successor for Paul Fitzpatrick Russell, though his nomination was not published yet. The new chargée d’affairs is Msgr. Æosč Sladan. I will furtherly update on this issue.

Many apologies for the mistakes.

One Response to Pope Francis: The Gaze Set on Moscow?